Since the election times have subsided into a state of dullness not at all agreeable to saloon keepers or anybody else. Thanksgiving Day had somewhat of an enlivening influence, yet it was only for the occasion. Everybody found plenty of nice turkeys for sale at four-bits a pound and chickens at forty cents, but they ate them all up, for none are to be seen hung up by the legs for sale any more. But these good American birds are speedily to be found when required, and will flock into town by the wagon load from the ranches very shortly, among the other

George Lammerhart, an old-time Comstocker, formerly with Mark Strouse in the meat market business almost next door to the ENTERPRISE office, is in the same business here, and has a corral on Main street near the geographical center of the town, where he has a large herd of big turkeys fattening for Christmas. And they furnish lots of fun for the small boy, who is happiest when he can see about sixty of them roosting on the fence at a time and all noisily responding in gabbling concert to his gentle whistling, sly screeches and hawk imitations. Their excited gabbling can be heard all over town. Carloads of toys and Christmas goods of all descriptions are being opened and arranged for sale at the variety stores, and notwithstanding the tightness of the time and scarcity of coin, the chances are that fully as large quantities of Christmas goods will be sold this season as ever, and perhaps more. It is a noticeable fact on the Comstock, as well as here, that when times are the hardest and people the poorest everybody seems to feel all the more hilarious and inclined to be festively liberal in the observance of the Christmas and New Years holidays.

The success of the tax collector is always a good indication and criterion of the prosperity of any community. The payment of taxes shows very significantly the degree of confidence taxpayers have in the public welfare and substantial prospective value of property. And so in this isolated community and sparsely settled country the collection of taxes this year has been exceedingly successful, only about two per cent. of the entire assessment roll now remaining uncollected. Of the $2,496 delinquent, nearly half is on the Battle Mountain and Lewis Railroad and the Victorian mining property -- dead or in litigation. This, in reality, leaves only two per cent delinquent on a tax roll of $75,000. This can hardly be excelled, and probably not equalled, by any other county in the State. It certainly shows well for old Lander county.

AN OLD MINE REOPENED.

The Naiad Queen, one of the oldest mines in this district, abandoned long years ago from superabundance of water, lack of proper facilities for working, and other natural causes, has recently been relocated, and is being reopened in good and promising shape, by Nye, Samson & Co., some of the oldest and best experienced miners in the Lander Hill ore belt. The Naiad Queen is situated a few rods in the rear of the Manhattan mill, and directly beneath the bed of the main ravine, or Pony Canyon. Its former owners and developers worked it to the depth of about 175 feet, more or less, and had a very good-sized and promising ledge of ore, but, as before stated, having too much water to contend with, and lacking the proper facilities for working, they could not make it pay, and were finally obliged to quit. The present proprietors have erected very neat and effective steam hoisting works, and are pumping, clearing out and repairing the old incline, preparatory to a well organized raid upon the long neglected and abandoned ledge. Thus it is that old mines, abandoned by the early settlers and locators, occasionally, even yet, find men of judgment and experience, with sufficient enterprise and ability to reopen and develop them.

The compiled laws of Nevada, as set forth in two volumes, did very well for a first attempt, but could be very materially improved upon. The compilation has proved to be a very great and valuable convenience, yet that it can be very greatly improved upon is a fact which has become more and more apparent. What is now needed is another compilation of the laws by competent persons revising and correcting the first, and reaching and embracing all legislative enactments down to the present time. The expense would not be great, the State can afford it, and it should be done -- by the most competent, faithful and experienced authorities.

Said he: "Yer may think I'm drunk, but I ain't. I've had a drink er two, but I know what I'm about 'n don't you forget it. I'm a fighter from Yankee Blade, Battle Mountain or h--l. You see my hands, thorny and hard from mining, milling or any other honest work, but when a feller gets up and goes for me, I jist naterally gets up and goes for him. I always used to think that I could wallop them champions of America, Europe or the world, but one day a feller comes down to see me right in the middle of a first-class match in at Martin's store, where I was havin' things all my own way, like Sullivan. He was a hard hitter, as I soon found out, but when it come right for him to be hit, he never was there. He reminded me of one of them 'ere "dippers" that you shoot at along the seashore, and that dive at the flash. When I struck out for his nose I hit over his head or past his ear. His head was never in the right place, and when I lunged past him, he would take me over too d--n slick. I kept at him till I was nearly dead, but never got in one good lick. He must have been a slogger from h--l or some other outside seaport - a sort of phantom ghost, as it were – nothin' to hit at, but hell on the return. I'm discouraged, and never feel happy only when I git tight and meet Tom Cheggs. Then we have it, for he's as big a damn fool as I am, and never sets hisself up for a fighter unless he's drunk. I wish he could meet that feller l found, some day."

We have two or three lots of dancing teachers working up the fantastic heel and toe accomplishments of our spry citizens, and now comes a handsome young lady from Carson, on the same layout. The way she is making numerous Austin lads sashay around and tumble to the racquet is amusing to contemplate.

To-morrow evening there's going to be a terpsichorean social for the benefit of the Episcopal Church. It is sure to be unanimously attended and a grand success. 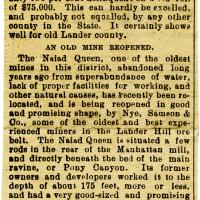