During the past week Austin has been but little convulsed with politics, and people generally have quietly settled down to the realization that Cleveland is elected. Bets of hats, clothes and other substantials, have been paid, and even considerable amounts in the way of coin bets have changed hands. There are many, however, who do not give it up yet, and will not until the National Committee of either party shall officially render their final decision in the matter. The opinion has gradually gained ground among Republicans that Cleveland will make a pretty good President after all, especially with the assistance of a Republican Senate. Others, again, bitterly declare that the New York ex-Sheriff and hangman will as soon as he gets seated in the Presidential chair, proceed to politically hang all the Federal officers throughout the Nation, even to the last poor trembling Postmaster; that, notwithstanding all his published sentiments and protestations, he will be obliged to yield to party pressure and divide the spoils of office among his hungry constituency. When one reflects that there are about 40,000 Postmasters in the United States, and that there are at least ten applicants for each postoffice, or 400,000 in all, it is easily seen that Cleveland's time will be pretty well occupied for a year or two in considering so many applications. The friends of Nasby all sympathetically rejoiced with him in having at last secured his long coveted Post office at the Confederate Crossroads. Yesterday, one enthusiastic Democrat, speaking of the congratulatory messages now pouring in from all parts of the county to Cleveland, said: "Even the Queen of England sends him her congratulations." Another Democrat thoughtfully remarked: "Well, I hope they won't re-establish slavery."

The present largely increased discount on silver, and corresponding depression in that staple product of this State, is an important subject for consideration and discussion. It is plainly to be seen that if this disastrous state of affairs continues, the effect will be to hang up our mill stamps and put a check upon silver mining. Here in Austin, where the mines are exclusively silver, the discount, including expressage, exchange, etc., amounting to over $200,000 a year, is a very serious drawback. If that amount could be turned loose in dividends it would make a very material difference. Various causes are assigned for the depression in silver. Some are of the opinion that the impending change in the political administration has no small influence in the matter. Capital is proverbially timid and apprehensive, and capitalists prefer to watch and wait the result of important political changes, and their possible financial influences and bearings. Speculation may have something to do with it, and also overproduction. Railroad building has been overdone and received a check, which operates detrimentally upon the iron interest, and all industries connected therewith, and this in turn affects the silver interest.

The present run of the Manhattan mill has been almost continuous since the 3d of January last, and bids fair to continue until Christmas, when there will have to be a stoppage for repairs and to allow an accumulation of ore from the various mines. The supply has held out thus far pretty well, but is beginning to run short. Considerable rich ore is still coming out at various points, and there is a good showing of ore to be extracted, but more extensive openings and explorations have to be made, and when the mill stops, the mines as well as the mill will be put in condition for another long and prosperous run.

In the mines, mining works, mills and general service of the Manahattan Company, are miners, engineers, millmen, machinists, business men, and other employees, who have been constantly in the service of the company, in its various and extensive departments, for nearly twenty years. These men, being found well adapted to their respective duties; faithful and efficient in the discharge thereof, have been carefully retained, irrespective of their political proclivities, and the result is seen in the perfect working of the entire system in the most advantageous and economical manner for the benefit of all concerned. All hands, from quill-drivers to dump pickers work harmoniously and everything is under the most admirable system and management. The civil service of the United States could not be better or more sensibly conducted.

A few evenings ago, just before the election, the Belmont stage came in at the usual time, about 8 o'clock, passing quietly down the street, but not stopping at either the Postoffice to deliver the mail, or at the express office to deposit three bars of bullion, worth about $3,000, which was on the buckboard. The driver sat up on his seat, but apparently took no notice of anything, and let his horse take his own course. Colonel Ellis was addressing a large audience, and there were bonfires on the street. The sagacious horse sheered past the fires, but somehow missed his own stable and went on to another, further down street. It was a sharp, cool evening, and the driver was discovered to be speechless, unconscious and completely chilled and stiffened with the cold. He was taken to the warm barroom of the hotel, where, after some hours of rubbing and doctoring, he was brought to his senses. The last few miles, crossing the summit of the Toiyabe range, his bottle of whisky failed to keep him properly thawed out. He was all right again next morning and drove back to Belmont, where he has been employed since, driving on that end of the route.

This newly-invented popular expression has taken practical effect here, and several of our business men have been getting their stores and places of business painted a sanguinary red. Nothing but red will do. Even the Piutes have evidently "caught on" to the idea, and now bedaub their faces with red paint more liberally than ever. A fat squaw, with a yellow dress, a blue handkerchief on her head and her face painted a blushing red, looks gay. Should Blaine be elected the price of red paint would go up like a boom in stocks.

One exasperated Republican has cut St. John out of his Bible. He says he don't want to read any more about him now that he's got into politics and made such a bad mess of it.

Ed. Gundry, formerly of the Comstock section, with two other miners, went down into Reese River Valley, some ten miles from here, the other day rabbit hunting. They found plenty of the long-eared donkey variety running about in the sagebrush like sheep, and after three or four hours' shooting they came home bringing twenty-seven fine fat fellows.

The only Democrat in Austin who is not an aspirant for the Postoffice, wants to be State Prison Warden, under the impression that it is a Federal office. ALF. DOTEN. 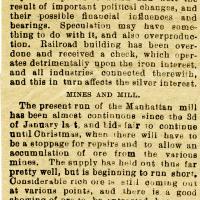