The intense strain on the political mind of Austin during the present week has been terrible to endure. On Monday came the marshaling of the forces and on Tuesday the grand battle at the polls. It is seldom that such a very lively interest is taken in any election, and the result was a very decided surprise to all who participated. Heretofore Lander county has gone Democratic by more or less of a majority, occasionally some Republican managing to squeeze into office through extra-ordinary personal popularity or shrewd manipulation, but this time it went sweepingly Republican. Austin polled about 700 votes, and county nearly 1,000. Woodburn, for Congress, received a fine Republican majority of 168 over Cassidy, and the highest was 233 for Public Administrator, 230 being the highest for Assemblyman. Only two Democratic candidates for county offices were elected- Joe Miller for County Clerk, and H.T. Creswell for District Attorney, with respective majorities of 107 and 94. Blaine's majority was 197.

Austin, with her 700 votes, being nearly three-fourth of the county in point of population and voters, here was the principal battle-ground, and some excellent work was done. An Anglo-American Club was formed in the last week of the campaign. It was a secret arrangement and consisted of 125 members, exclusively Cornish; Englishmen not being admitted. And they pledged themselves to vote the Republican ticket straight, from top to bottom. They went to the polls in squads of five, carrying their ballots folded in their hands, and each voter watched his fellow very closely, so there was no show for sly changing of tickets or similar humbuggery. So the great free American privilege was thus carefully guarded from corruption, and the plan succeeded admirably. Yet it did not prevent Joe Miller and Harry Creswell from being elected. It is an evident fact that these two very successful Democrats received a large number of Republican votes. There were big spur wheels, and wheels within weeels in the running of the political machinery, but everything ran as smoothly as could be wished. Many Democrats declare that a "sack" was used, but fail to show precisely how or where.

THE DEAD AND WOUNDED.

The number of politically dead ones as the result of this well-fought battle is very small; in fact, perhaps, none, and none were crippled badly except in purse. The soreheads and coon-dogs all try and take the gruel of defeat as philosophically as possible. Those beaten in the convention have a fraternal regard for these still more unfortunate ones who succeeded, only to fall on the field of battle -- to "drop on themselves," as it were. And these poor victims of misplaced confidence in their own natural capability, political strength and personal popularity may now also reflectively apply unto themselves those consoling lines of Bobby Burns:

O wad some power the giftie gie us

To see ourselves as others see us!

It wad frae mony a blunder free us,

But there is a grain of satisfaction in the idea that some of those who look on and critically judge and who, perhaps, deliberately assisted in their defeat, may perhaps also have the vanity to place themselves before the public as candidates for political favor at some future day and give a chance to play for even. Yet, after all, it is not a good proposition to be brooding too long over real or fancied wrongs, and in a few weeks the bruises and sores of this last battle will heal of themselves if left along and unaggravated. The sooner the incidental acrimonies are settled and disposed of the better.

The excellent results of Senator Jones' recent visit to this part of the State can now be plainly seen and appreciated. Never did an able and eloquent speaker logically, practically and comprehensively explain the important political topics of the campaign to more willing listeners and with better effect. He captured the reasoning powers of men, and the hearty, magnetic influence of his friendly presence inspired all with confidence in him wherever he went. Even many politically opposed to him yielded to his arguments and their own natural perceptions of right and wrong, and voted the Republican ticket when the proper time came. This most certainly is demonstrated in Lander and Eureka counties very satisfactorily by the magnificent and unexpected increase of Republican strength md effectiveness at the polls.

If the lies that have been flashed over the continent during the last two or three days could be strung on the wires like dried apples, there would be enough to reach from here to New York, where most of the lies come from. At first Cleveland was triumphant, next it was Blaine, then both were mixed. And fresh lies and contradictions came from the West as well as the East, and the numerous parties who had their money bet on the general result, or any special contingency were kept in a wild fever of doubts and fears, and if this thing is kept up much longer there will be suicides, fighting, or fresh subjects for the State Insane Asylum. There are thousands of dollars bet on this election, and fresh bets are being made. The last telegram to-night said Blaine was a little in the lead in New York, but the chances are it will be Cleveland's turn in the morning.

If the atmosphere would allow it, I believe Austin would speedily become the banner precinct for square out-and-out whole cloth lying. But the purity of the atmosphere, saturated with an overflow of natural truthfulness prevails, except during political campaigns. Everyone of the recent candidates got unmercifully lied about, and it became an actual relief from the oppressive weight of accumulated mendacity to be able to get off a few rascally lies, or hear some fresh lying inventions told on somebody else. Ananias would be perfectly at home here. Some of the defeated candidates have been so badly and wilfully lied about that they have about lost confidence in their own integrity. It will take months to clear up those sulphurous lies, and some of them never will.

The grand ball of the soreheads, kickers and coon-dogs, the night after the election, was crowded, and all hands smiled and danced as philosophically as possible under the circumstances. The only independent candidate, who didn't get votes enough to be hardly worth counting, was the liveliest dancer of the lot, and his pas seul, executed on a single string was the finest terpsichorean feature of the evening. They all boarded the Salt River boat in the morning, and "went upward with the flood."

The Manhattan mill grinds right straight along, and it grinds exceedingly fine. And the work in the mines goes ahead as usual, regardless of politics. Senator Jones found numerous old Comstock miners here to shake hands with, many of whom used to work in the Crown Point and Kentuck, under his superintendency.

Sam. Crescenzo, of the International Hotel, ran up his flag Wednesday morning in honor of Cleveland's victory. Then the telegraph said Blaine had the best of it, but before he could pull down his flag Cleveland was on top again. Then it was Blaine and next Cleveland, until Sam. quit trying to even average either side, and now swears he will keep the flag up till he finds what it is flying for. Sam. and his partner, Tony Gondolfo, both despise lying telegrams and liars generally. 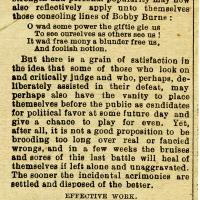