The wild, whirling cloudburst of politics at present convulsing Eastern Nevada, has descended upon Austin like a cyclone on a millpond, and the consequent disturbance among both big and little fish is demoralizing to contemplate. The crowning culmination was the Republican County Convention of Saturday, placing both sets of political nominees squarely before the public. And now the buzzy candidate flitteth from knot to knot of his friends along the sidewalks and street corners, and the expectant saloonkeeper gleefully rubbeth his hands as he contemplates possible movements in his direction. He complaineth, however, of too much talk and too little beer, and draweth invidious comparisons between this and far more lucrative campaigns in the regretted past.

Truth to speak, it were better for the contracted purses of the various candidates that these conventions had been held a week or two later. The successful nominees on both tickets, jealously watchful of their opponents in the contest for popularity and influence among the voters, recklessly spend their coveted official fees in advance, and the defeated aspirants serenely stand in at the bar and help deplete their borrowed treasures, philosophically remarking: "Go in you galled jades, our withers are unwrung." Success in the nomination is a tribulative, uncertain quantity at the best, and especially where the political parties are so unevenly divided as they are in Lander county. Many a troubled candidate ardently wishes now that he could sleep beneath the waters of oblivion till the 5th of November and then wake up elected.

Conventions without resultant soreheads are not common in the State of Nevada, not even in Lander, the "mother of counties," and the soreheads here, as well everywhere else, look back retrospectively, and see and tell just how they got beaten, and what beat them. But the most fruitful source of soreheadedness is the having to continually explain the how, why and wherefore. If sympathizing friends or hypocritical interviewers would let them alone, as they come out of the fight with lacerated craniums and trailing tail feathers, they would not feel half so sore. We can all see further behind than we can ahead. One poor unfortunate deliberately went into one of the conventions, with the full slate of that convention in his starboard breast pocket, knowing that he was to be slaughtered. He put up his little $5 to learn something, learned it, captured all the votes outside of the slate, and came out defeated a little, yet not crushed nor soreheaded.

"He who fights and runs away,

May live to fight another day."

Sometimes it is good for a man to try his popularity in this way, to "drop on himself," as it were, and find out his definite status in the opinion of his fellow men. As Bobby Burns so aptly and suggestively remarks:

"O, wad some power the giftie gie us

It would frae mony a blunder free us,

Independent candidates who announce themselves after the convention, are naturally classed among the soreheads, and are equally to be feared. The sorehead naturally tries to get even by slyly coppering sundry portions of the ticket, and influencing his sympathizing friends to do the same. The Independent candidate, however, may have for his only motive the defeat of some individual whom he deems to have been unjustly preferred to him by the slate-makers, and he concentrates his efforts to that one point. In a county where a quiet combination of less than a hundred voters can "horse" either party and sway the election as they please, Independent candidates are powerful and have been successful. The only safety with the regular troops is to stand shoulder to shoulder, soothe the soreheads as much as possible, and vote the ticket straight. "All's well that ends well." These remarks are not intended to apply in this section any more than to the Comstock and the rest of the State.

In making up a party ticket blunders are too apt to be made in considering the political availability of individuals, and social preference instead of real merit and popular strength. The idea that a man must be good for a legislator, Superintendent of Schools, or other officer, etc., merely because he is available and thought to be strong, is the old coon dog style of argument: "H--ll on coons, is he?" "Well, I guess so; don't know." "Then what makes you call him a coon dog?" " 'Cause he ain't worth a damn for anything else." The chances are that the coon dogs in this fight will be among the corpses found on the field, after the battle in November.

The Republican County Convention last Saturday bore a singular resemblance in some of its features to that of the Democracy a week previously. A. Nicholls was Chairman, and everything passed off as smoothly as though cut, dried and greased beforehand, occupying only four hours' time, most of the nominations being made by acclamation. The order of business was the same, and it started off exactly like the Democratic Convention, forty two votes being cast on the very first ballot, when there were but thirty-nine members. Some weak, injudicious nominations were made, but, on the whole, the ticket is stronger than that of the Democracy. Those coming under the head of "coon dogs," on either ticket, and destined to be slain in the November battle, can thank the injudicious management, as well as their own personal unfitness, weakness, and unpopularity, and not attribute their defeat to the superior strength and generalship of their opponents.

September seems to be the favorite month for catarrh, hay-fever and universal sneezing. Anyhow Henry Ward Beecher has his annual attack of that disease in September, and many people in this section as well as in the East are now, like him, rapidly recovering from it. A New York correspondent of the New Haven Register, writing under date of September 16, says:

Beecher is so afflicted just now with hay-fever that I doubt if he cares whether we ever have another President. Although a certificate signed by him, and declaring that a certain medicine is a sure cure for that disease, is current in the advertisements, he is having his annual spell of it. His nose is the reddest I ever saw, and his sufferings are so acute that it might be dangerous to ask him why he didn't take the dose which he lauded.

Beecher has tried to escape the impending calamity by going to the White Mountains and other resorts in September, yet he has not been very successful. Uncle Henry may dodge female blandishments, conviction and tophet, but he can't dodge the hay-fever.

And now we are all looking ahead in hopeful anticipation of the promised visits of campaign speakers to this section -- Woodburn, Jones, Daggett and others. Jones promised to come here two years ago, when he was at Eureka, but disappointed us through inability to connect. He has a host of friends and admirers here who would like to see him and hear him expound some of the leading texts in the political gospel as only he can do it.

The Manhattan mill is steadily smashing rich ore and turning out plenty of bullion as usual. There is ore enough in sight and available to keep it running till New Years. Meanwhile further developments in the mines may furnish material to keep it running for an indefinite period.

Our local military company, the National Guard, will, as mentioned in my last, effect its reorganization next Sunday with a very largely-increased membership and Melville Curtis is the new Captain.

The formation of a third, or Independent party, composed of both Republicans and Democrats, dissatisfied with the result of the recent county conventions, has been quietly discussed the last few days, but the movement has not taken tangible form as yet.

The homeliest woman in Austin has, for the last twenty years, been spoiling for a husband. She has at last concluded to buy her a coach, but the only trouble now is to secure a suitable coachman.

The pine nut harvest has been extraordinarily good this season, the nuts being unusually large and plentiful. And the thrifty Piute sells his nuts for coin, and takes more interest in flaming red and yellow blankets than he does in politics.

A grand ball is advertised in the Reveille of candidates nominated at the recent county conventions of both parties, to take place at International Hall next Tuesday night. No outside invitations are extended, therefore we must infer that they do their own dancing and pay their own fiddler. But the grand coon dog ball, to be given on the night of November 5, composed of defeated candidates, slaughtered aspirants, kickers, independents and soured politicians generally, will totally eclipse anything of the season. Music by the Salt River Codfish band. Admission and exit free, with coon dog cocktails thrown in.

The ENTERPRISE idea of the consolidation of Washoe, Storey, Ormsby and Lyon into one county is good enough, but too extensive for sudden adoption. Storey should merge into Washoe, and Lyon and Douglas into Ormsby, thus forming two convenient-sized counties to very good advantage. Reno and Carson would then each be a boss county seat, of equalized importance and increased prosperity -- and with trebly increased mutual jealousy. 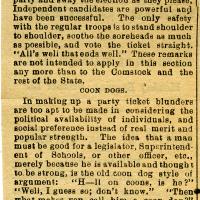