The Democratic County Convention, day before yesterday, brought a lively snow storm, which lasted until last evening, covering the whole country with a wintry blanket about four inches thick. Thus far we have had snow in every month in the year, sufficient to whiten the hillsides and mountain tops about here on each occasion. Last Winter was evidently a "holdover."

The aforesaid convention of our Democratic friends was a model affair of its kind, and passed off very smoothly, James B. Eagan, Chairman, presiding like an old veteran, although he is a young man and this was his first attempt. There were many amusing incidents, such as forty-two votes being cast on the very first ballot, when there were only thirty-nine members. Four nominations were made for the three Assemblymen to be chosen, and a motion was carried to vote for each one separately. It took considerable argument to show that this could not well be done, when the motion was withdrawn, without reconsideration. For County Commissioner one ambitious delegate scattered his ballot by putting the names of all three candidates upon it. Our worthy County Assessor, trusting in the legality of the bill passed by the last Legislature, enabling all County Assessors to hold their offices two years longer than they were elected for, felt serene, and made no fight until the decision of the Supreme Court was telegraphically received, declaring the bill unconstitutional. Then he sailed in and got badly defeated in the convention. He probably saves money by it, however, as all the nominations of this convention, with, perhaps, two or three exceptions, are destined to be beaten at the November election. At the conclusion, three cheers were given for Cleveland and Hendricks, and all hands hilariously broke for the nearest saloons without waiting for any formal sine die adjournment. The chair is in doubt as to whether the convention has taken a general recess or a two years' vacation. All these harmless little irregularities merely gave the spice of variety to the occasion, and perhaps the Republican Convention to-morrow, may be similarly flavored.

The first heavy artillery of the campaign was fired last Saturday evening, when Congressman Cassidy addressed the population of Austin, giving his views of the political situation, and rendering an account of his stewardship. Bonfires blazed, cannon roared, and martial music swelled forth upon the cool evening air. The spacious court-room was crowded and quite a number of ladies were present. In a two hours' speech of fervid eloquence, our portly, handsome George vindicated himself and his course admirably, discussed the tariff, which, if intended for revenue, he said, should not be placed so high as to prevent importation, or there would be no revenue. He portrayed and represented Cleveland as one of the grandest, ablest, men of the present age, and proved to the satisfaction of all who knew no better, that all the past and present prosperity of this great American nation was due solely to the noble, pure and incorruptible old Democratic party. George is a man of fine presence, positive remarks, and bold, unblushing assertions.

Among the most frequent visitors to Austin from Battle Mountain, especially during the sessions of the District Court, is Judge E.A. Scott, the veteran journalist. He tells a very good story on himself -- how he got caught out once. It was about nineteen years ago, and he was traveling one night over the New York and Erie Railroad. The train stopped at a station in the town of Binghampton, and he was awakened by a terrible row on the platform of the depot. He sprang out of his berth with nothing but his shirt, drawers and socks on, and rushed to see the fray. Two men were having a desperate and bloody rough and tumble fight, amid a wildly-excited crowd, and sundry policemen were trying to press in to the rescue. Scott got as badly excited as anybody, and joined in the surging mass. Just then the bell rang and the train started. He managed to get out of the crowd and rushed for the cars, but he was too late , and found himself left. Worse than that, the fight was over, and he found himself in the hands of the police and several angry persons, all asking what he had to do with the fight. "Nothing," said he. "Then what the devil are you stripped for?" He had a hard time explaining and making them believe, and they held possession of him six hours, till he telegraphed ahead to the next station, intercepting the train, and had his clothes and baggage sent back to him, after which he was permitted to go on.

The Manhattan mill has started up again after a couple of weeks rest for much needed repairs to the roasting furnace and sundry improvements to the machinery. There is plenty of rich ore in the ore houses and in sight in the mine to keep the mill running for an indefinite length of time. The big Comstock plunger pump at the Frost shaft, of which I have heretofore made mention, has been running regularly ever since it first started, nearly three months ago, and does even better service than was expected of it. The pump, as stated, was from the Sierra Nevada mine and the bob from the Woodville, Lower Gold Hill. Having better foundations and being set up far better than it was originally, that ponderous bob works very much smoother and more perfectly than it ever did before; in fact the whole arrangement constitutes a very effective, economical and thoroughly satisfactory piece of machinery. Near the huge tank or reservoir into which this pump discharges, a powerful steam pump has recently been located for the purpose of forcing the water to the hoisting works of the neighboring mines, and also supplying the hydrants about the new and extensive buildings erected at the Frost shaft, giving prompt and effective protection in case of fire.

The present cold snap is discouraging and unprofitable to ice-dealers. Joaquin Patargo, who hauls Reese river to town every season and peddles it out in a frozen state, has ice in his storehouse over three years old. It keeps first-rate, not even getting mouldy or wormy.

A good-looking young lady the other morning stepped into a saloon and struck the barkeeper across the face with a cowhide, remarking: "I'll learn you how to talk about me. I'm too good for you to talk about." Then she left him, wondering what it was all about. The cowhide only made a little welt or dent across the corner of his eye, so he considered it a case of mistaken identity, until he could make further inquiries. Anyhow, he don't like that style of lick-er.

A few days ago, at Watson & Williams' blacksmith shop, I observed a small herd of cows being shod. They were young animals, of fine breed, and being driven from Salt Lake Valley to California. Their feet became worn and tender, so that shoeing became a necessity.

The curfew bell ringing at 8 o'clock every evening, still works to a charm, sending all the little boys home at the proper time. And everybody counts to see that Chief of Police King doesn't miss a stroke. There being so many candidates in the field for the various county offices, numerous sore-heads naturally resulted from the Democratic Convention, and many more will result from the Republican Convention to-morrow. Political buzzing is the chief feature among the general public just now. 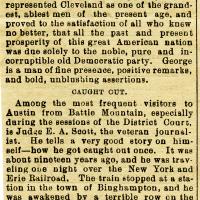