Last evening the County Republican Central Committee met and selected twenty-seven delegates to the County Convention on the 4th of next month, to be voted for at the primaries to-morrow. Congressman Cassidy will be present at the primaries, though he is not liable to vote, but in the evening he will deliver his well-written campaign speech with which he has already commenced swinging around the circle among his native sagebrush. Cassidy is a good political worker, and has laid out a lively and extensive amount of work for himself between now and election day. Woodburn, however, will commence camping on his trail shortly. The published test for the democratic primaries last Saturday was merely for the voters to agree to support the nominees of the party at the coming election, but the managers evidently didn't consider that strong and perfect enough, for they asked each voter if it was his intention to support the head of the ticket and vote for Cleveland. Seven said they would not, consequently were barred out, some, of Celtic origin, declared they would not vote for Cassidy or anybody else, as against Woodburn for Congress. There were 168 votes polled, but I hear of several besides those who were barred out who would have voted had not the test been made so stringent in committing them to vote for Cleveland. That illustrious person is not a favorite with the Austin Democrats. As straws are said to show which way the wind blows, and, as there seems to be nothing against Hendricks, perhaps the result of the general election may be Blaine for President and Hendricks for Vice President. In that case Blaine should wear bullet-proof shirts and have his life insured.

Our Irish-American fellow citizens are not altogether blind devotees to the Democratic party by any means. They have their eyes open and think for themselves. Many of them are Republicans or next door to it, and go in warmly for Woodburn for Congress. Cassidy has done well for his constituency and the State, but Woodburn can do fully as well or better, and Cassidy is not as popular or strong as he was two years ago. The chances are in favor of Woodburn, warming his jacket pretty effectually, and inducing him to stay at home. Cassidy can afford to rest on his well earned laurels for awhile, and "may-be-so" he may succeed Uncle Jimmy Fair to the United States Senate a couple of years from now.

As before remarked, much more depends upon the judicious selection of men for the Legislature at Carson this time than is generally considered. The election of a United States Senator to succeed Jones is of course important, but beyond this comes very serious propositions of paramount interest to the already over-burthened taxpayers, principal of which is the reduction of the regular grain upon the State Treasury, and the more economical administration of State and county government. The number of officers can be reduced, deputies and other luxuries dispensed with, the county and judicial systems condensed, and the sails of the State properly timed to meet the dilapidating breezes of adversity at present prevailing and likely to continue. Another vexed and much discussed question, is regarding the advisability of a Constitutional Convention to get up a revision or regeneration of the State Constitution. There is no doubt that it needs it badly, but whether biennial legislative tinkerings by novices is better than giving the job to the best men that can be selected for that special and important duty, is a problem to be carefully considered, argued upon and properly solved. Past experience has shown the average Nevada legislator to be capable of not much beyond, 1st -- Looking out for his mileage and salary; 2d -- Electing United States Senator; 3d -- Hatching out various bills and dead failures for the regulation of the railroads; 4th -- Passing scrub relief bills for the mutual relief of both legislator and applicant; 5th -- Studying how not to reduce any running expenses, State or otherwise, and 6th -- Laboriously and anxiously figuring how to fill out the session to its full limit and last minute. If the State House roof needs repairing, remodeling or rebuilding by all means employ the best mechanics adapted for that particular purpose, and not Jacks of all trades, which are traditionally considered to be good at none. It may cost more at first, but will be cheapest in the end. Having expressed these same ideas editorially on the same subject three or four years ago, I can claim the jewel of consistency, if nothing else.

The temperance gospel, according to St. John, seems to be obtaining considerable weight in the minds of people throughout the east, and even extends to the wicked Pacific Coast. Many a whisky-hardened old sinner has wished for a time of deliverance from the chains that bound him, and is willing to rise and follow the red cross standard of St. John for his own personal benefit and salvation. But what total destruction to the Democratic party! Republicans some times take a little good whisky, when their seductive Democratic brethren invite them, of course. St. John advises that all whisky be not drank at all, but quietly left in the drug stores, but for what particular purpose he does not say. But what an idea! The drug stores would be worse overloaded with whisky in seven days than the United States Treasury has been with silver coinage in seven years. Yet thousands of suffering wives and families throughout the Nation would bless St. John, nevertheless.

A new whisky mill has opened, or a closed one revived, within the last day or two, for the especial benefit of all candidates, traveling speakers, and those engaged in the active work of the campaign. And yet many of the saloon men complain of hard times.

Our local military company, the National Guard, has reorganized lately, and will shortly bloom out with doubled numbers, a new Captain and other invigorating circumstances. The brass band of sixteen pieces connected with it cannot be beaten and perhaps equaled in the State.

A party of county officials went out in the country "fishing," they said, the other day, but they brought no fish. They said they fried and ate all as fast as they caught them. Many politicians go a fishing nowadays.

Catarrh is plenty, now, most anywhere, and lot of people are afflicted with the wearisome complaint without fishing for it. The recent frosts did injure the late wheat crop some, especially that portion of the grain that had fallen down or "lodged," but the present good weather brings most of it out all right, and the crop will be better than average.

The Fall fights culminated the other evening with a very severe tussle in a variety store. He was drunk and disorderly and tried to beat the head of an innocent drum. The Chief of Police rushed in. There was a terrible struggle, participated in by bystanders, and a general tumbledown, with a United States official underneath, with his broad back on seventy-three pounds of ripe tomatoes. Every tomato was pressed flat and reduced to a flowing stream. The prisoner was taken to the calaboose, and the grand question is who pays for the tomatoes. 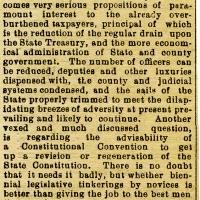