About this time the ambitious aspirant for office and the wide-awake political buzzer are getting in their work very lively, in view of the equinoctial culmination of the political status to take place within the next few days. Day after to-morrow the Democracy of Lander county will hold primaries for delegates to their County Convention, October 1, and one week later the Republican primaries will be held, the time for their County Convention being fixed for October - three days behind the Democracy. This, of course, is merely a matter of political courtesy on the part of the Republicans, and a delicate recognition of the small, yet predominating Democratic majority and leadership in this county.

Is considered the most effectual style of political work in this section, consequently we have no clubs, spouting demagogues, or howling enthusiasm as yet, though it is hard to tell what may happen before we get through the campaign. One shabby looking person with three pints of whisky in him got on a dry goods box the other evening and undertook to expound the principles of Democracy, but the tariff proposition confounded him, and he wearily sat down, discouraged, retiring to a friendly doorway for a few hours rest and recuperation. We have a very good set of Democratic county officials, all of whom having performed well the duties of their respective offices, naturally desire to be re-elected, with the exception of Treasurer and Sheriff, both of whom modestly stand back. The liveliest contest seems to be between two powerful and popular candidates for Treasurer, and both are working hard for favorable delegates and the nomination at the hands of the convention. Both are quietly, yet very ardently, buzzing around and laying their wires, and every day or two they slip out into the country, hunting or fishing, yet bring home neither rabbits, ducks nor trout. And the only announced Republican candidate for the responsible office, while doing a goodly amount of still hunting for himself, quietly watches them both, hoping that the weakest and least popular of them may get away with the nomination. Austin being the grand metropolis of Lander county, has the lion's share of delegates -- twenty-one out of thirty-nine in the Democratic Convention and twenty seven in the Republicans, consequently Austin has the say and the sway to a majority extent. Battle Mountain, 100 miles hence at the north end, is the next point in voting importance, and has correspondingly just claims for consideration. The Democratic Battle Mountaineers ask as the hands of the Convention, first, a Commissioner; second, Sheriff; third, member of the Legislature. The same may be said of the Republicans at that end of the county. They certainly are entitled to one, if not all three of the positions, and most certainly one of the three Commissioners. Neither party has much to say about members of the Legislature as yet, and no new aspirants came boldly to the front. Some of the old ones, who have been there, signify their willingness to serve again, however, so the country is safe enough on that point, but the selection of county offices seems to be considered of paramount importance. On this special occasion, most certainly, that is an incorrect idea, for the coming Legislature has to elect or re-elect a United States Senator and make some important efforts toward tinkering up our defective State Constitution.

This is the knottiest, most irreconcilable and least understandingly discussed of any point in American politics, and very few of our local politicians care to discuss the proposition unless it is forced upon them. In a bar-room discussion the other evening, after Blaine and Cleveland had been disposed of as usual, somebody asked old Jim Sloggers his opinion of the tariff. That solid old pioneer meditatively swallowed another glass of beer, cocked his blessed old sombrero over his larboard ear, twinkled his eyes like shirt-button holes, and sagaciously remarked: "Well now, gentlemen, this yere tariff question has allers bothered me. Old Reese and me used to talk it over nights when we first discovered and camped along the river. This State don't raise nothin' with protection 'cept silver, and that pays its own tariff. I didn't have nothin' to do with 'lectin Jones, but he's done mighty well for us in protectin' our silver agin Jay Gould, Vanderbilt and othur Greenback ranchers thar in the East. Ef they had their way, in less'n a year silver wouldn't be worth nothin' but to make tin kettles of." "Yes, yes, but how about the tariff?" Old Jim cautiously gulped down another schooner, after the style of popular lecturers taking a glass of water when they come to a hitch in the thread of their discourse, and went on: "The tariff, boys, is one of the biggest benefits to the country I know of. In seven-up we have high, low game, an' from that we have high, low tariff. Free trade is another branch of the game, got up to rope in the Britishers an' the Chinees. Ef ye conclude ter elect me ter the Carson Legislater, I shall jest go in for combinin' high, low tariff an' free trade together, an' so settle the whole racket satisfactory to all concerned. It might make old Ben Butler President next term, but thar ye have it, anyhow, an' them's my sentiments. Great food for reflection, don't ye see? Call for more beer, somebody; I'm feelin' dry." His audience admiringly, reflectively and applaudingly responded, yet no one seemed thoroughly enlightened. His views, although uncouthly expressed, are about as clear and sensible, on this subject, as those of many more pretentious and aspiring political expounders. Among the most sensible and concise expressions on the tariff question are those of Hon. J.P. Jones. He believes that everything that can be manufactured or produced at home with the same labor or advantage as the same can be produced abroad, should be protected from foreign competition by a judicious tariff, even though the money price of the home-produced article may, in consequence of higher wages, be permanently higher than the foreign article. He has always been a consistent advocate of good wages for honest labor, and the protection of our home industries from foreign cheap labor competition. On the other hand it would obviously be detrimental policy to obstruct the importation of articles or industries wherein other countries have by climate, location and other natural advantages an invincible superiority over our own in the production. He says: "No one would propose, for instance, to stimulate by tariff duties the growth of coffee or bananas in this country, or hot-house production of spice or india rubber trees. In such and in similar cases the best policy is to appropriate to our own use the special advantages of other regions, and we effectually do that by free importation, because, in fact the producers are only remunerated for their labor, and scantily at that, while we participate equally with them in the bounties of nature which they enjoy." On the free trade proposition he says: "I am opposed to a free trade which subjects the people of this country to the very competition to avoid which either themselves or their ancestors underwent the hazards and dangers of migrating hither. I am opposed to a free trade which reduces the wages of the American laborer to the level of the poorest country in the world, whereas he is entitled to such wages as would result from the material resources and wealth of his own country.

HOME FROM THE OLD COUNTRY.

Many Englishmen from Cornwall object to being called Cornishmen, on the ground that it implies an understanding that they are not Englishmen. Yet it is only among the most ignorant classes that the idea can prevail that a Missourian is not an American. In fact, it is really an honorary distinction, for most of us would rather be called a Cornishman than a Cockney, or a Cousin Jack, than a London pick-pocket. This being essentially a mining community, the Cornish element is unusually strong, and many of our best, most loyal and trustworthy American citizens are from the Cornish part of England. They generally prefer working as tributers or leasers in these mines, taking chances on developing good "pitches," or strikes, like old California gold miners, instead of working for regular day wages -- Thus it happens that many of them simply struggle along, month after month, and year after year, just keeping their heads above water, as it were, while others, working no harder, are in prosperous circumstances, and realize small fortunes through incidental good luck. And thus it is that small parties of them frequently go on a visit to their childhood home and friends in the old country. Last February "Uncle Dick" Mitchell, Tom Eustace and others made the trip in good style, returning a few days ago with Mrs Mitchell and daughter and Mrs. Bluett, wife of Harry Bluett, formerly well-known among the mining and social fraternity of Gold Hill. Their return trip across the salt water was on the City of Rome, one of the noblest steamships of the Anchor line, or any other line. She is about 600 feet long, and carried 1,700 passengers --about the population of Austin. In fact, they describe it as like being in a big floating town, the long deck resembling a thronged street. The huge vessel ploughed through the rolling salt sea waves like ripples on a mill pond, making the trip from Liverpool to New York in seven days and eighteen hours, her best day's sailing being 430 miles. The boys had a glorious good time, were glad to get back to their sagebrush American home, and have gone to work again with renewed vigor.

When they landed in New York they encountered the reality of the Presidential question, and Cleveland seemed to predominate, but outside of the city Blaine was more popular, and as they came westward the grand chorus was for Blaine all along the line. Coming through Kansas one day in order to ascertain the Presidential views of the passengers on the train, a vote was taken which resulted in 263 for Blaine and 63 for Cleveland, and none for Butler.

Last Sunday we had some horse-racing down near the river, which did not exactly throw the records of Flora Temple or Maud S into the shade, but there was lots of fun.

The other day Dan Wallace, a worthy rancher and County Commissioner, received a letter from a man in Sacramento, kindly informing him that young Wallace, who is at school in that city, had broken his arm and was much in need of $150, which he hoped the father would transmit forthwith. Dan rushed to town, hit the telegraph, and found nothing was the matter with the boy. Somebody didn't pick up $150 by this ingenious little joke.

Henry Welch, Saul Rosling, Horton and other noted fishermen have distinguished themselves recently by the immense number of chubs they say they have caught in the river. They gave them all away to their friends, therefore they are not worried with bones sticking out through their skins like hogs' bristles.

Tom Triplett, out at his Hot Springs sanitarium, the other side of the valley, has invented a cage for milking unruly cows. When inside of it they cannot move, and he sits on a piano stool, reaches through the bars, and milks away in perfect comfort and security.

The Manhattan mill has shut down for a few days in order to make absolutely necessary repairs to the roasting furnace. Meanwhile, work in the mines goes right along as usual, with plenty of ore to keep the mill running when it starts up again. 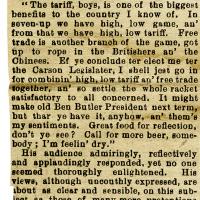