Throughout Eastern Nevada the political whirl has commenced, and the mythical pot is boiling, and now that the Republican State Convention has set forth its results and its candidates, the aforesaid pot is supposed to boil with constantly increasing ferocity until the grand general election in November. The nomination of Woodburn for Congress and Hawley for Supreme Judge was calculated upon and expected by all Republicans well posted in the inside political policy and with the available personal material of the party. Success, as before remarked, is the grand desideratum in any political party, the nomination of the strongest candidate - the winning horse -- so to speak. The nomination of Woodburn as Congressional Representative from Nevada is a strong one. Others equally strong, and perhaps stronger, could have been made could they have been induced to stand in; but Woodburn is the coming man who is to warm Cassidy's jacket for him properly. Woodburn is a man in the vigorous prime of life, possessed of excellent ability as a statesman and much more than average talent and force as a natural orator. Moreover, he has already very creditably served one term in Congress as Nevada's Representative, and has not to face the Democratic objection to the third term, which most surely must set Cassidy back in case his constituency are properly consistent. As for Hawley, his record for Supreme Judge is very satisfactory and well deserving of continued indorsement; therefore his renomination was a natural consequence, as will be his re-election.

For United States Senator for Nevada William Dunphy, the famous cattle king, will most probably be the nominee of the Democracy. He is a gentleman of fine physique, magnetic presence and good address, and cannot be said to possess "more bullocks than brains," for he is intelligent, shrewd, and in real executive ability and bold decisiveness has few superiors. Our present most worthy Senatorial representative, John P. Jones, seems to be the only man to make Dunphy or any other Democratic nominee take a back seat. We all know Jones and his brilliant record in behalf of the true interests of Nevada, and look to him to make a judicious and successful fight. He must and will do it.

Of voters is, of course, actively going forward here as well as everywhere else. Lander is considered as a Democratic county, or has been heretofore, but judicious political management, as well as natural progressive changes in the minds of the voters, may make it otherwise. The balance of power is light, and not difficult to overcome and control one way or the other, and the Democracy well appreciate this fact, although master of the situation at present. But the fact must not be lost sight of that the Democrats are registering lively, as usual, and not urging Republicans to do so too. Austin's small Democratic majority is very carefully nursed and looked out for.

I see by the Arizona Silver Belt that John Laity, formerly well known on the Comstock, has brought suit against the South Pioneer mine, Gila county, for $20,000 damages, the result of a misfortune in the daily prosecution of his work. He and three other miners were being lowered down the shaft March 12, 1883, by an inexperienced or incompetent person in the employ of the company, when, by a wrong clutch being applied, they were allowed to drop to the bottom, 300 feet, as fast as the reel would allow them. All three were badly hurt. Laity the worst. He had one leg broken and both ankles badly dislocated and injured, making him probably a cripple for life. Laity formerly worked in Gold Hill for several years, principally in the Belcher mine, leaving there for Arizona nearly two years ago. He has many friends to wish him success in his lawsuit.

Whenever any of the old Reese River pioneers, or other ancient relics, get too badly used up by a chronic overplus of whisky or rheumatism they go out to Triplett's Hot Springs, about twenty miles westward from here, in the mountains beyond the valley. There they wallow in soft, black mud and slumgullion for a week or two, or till they soak or poultice all their sins away, and come back looking happy and rejuvenated, with a new lease of life. Whenever one of these old stiffs takes his first swim in the big bathing pond all the catfish go on a hilarious jamboree for three days. Billy Tower and Uncle Isaac James, who have just returned from there, will testify to this fact.

Evening before last we had a grand moonlight excursion down to Wiggin's ranch, on Reese river, about a dozen miles from here. Two cars were loaded with about 125 people, including many ladies, and the elite of Austin. It was the finest party gracing such an occasion for a long time. There was plenty of moonlight, but it was clear and coldly beaming. The cars were well fitted with seats, and the ride both ways was very enjoyable. At the grounds was a fine large pavillion, without roof or sides but a good broad floor, and the dancers had to hop around lively to keep warm. There was plenty of good music, good eating, etc., a little side bar and a big bonfire, so everybody contrived to have a pretty good time, although the air was frosty, and overcoats, big shawls and thick wraps were in demand. There were several of the best singers in Austin among the party, and all the way home they gave a continuous grand concert, coming into town a little after midnight with a grand ringing chorus.

The Episcopal parsonage, or rectory, was recently sold for $550, cash, a new one in a better location having been purchased. This is the heaviest transaction in real estate for many months. Rev. Mr. Kirkbride has been appointed Pastor of the Methodist Church, in place of Rev. Hogoboom, deceased. 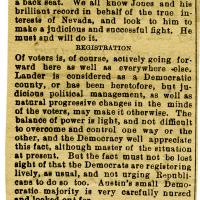