Correspondence of the Enterprise.

"Hurrah! for Cleveland," has been the popular cry here since the great Democratic National Convention at Chicago concluded its mountainous labors and brought forth two such small mice as Cleveland and Hendricks. But the Republicans do the hurrahing over the proposition, and the disappointed Democracy enthuse not over them worth shucks, so to speak. They were nominated on Friday, "Hangman's Day," and the proper head of the ticket being blunderingly hung on to the tail, the defective outfit will be more easily strangled by the Republican rope next November. After waiting eight years for "vindication," it would have been at least decent to have placed the only active survivor of the "eight to seven fraud" at the head of the ticket. And it does not always follow that in order to carry New York for the Presidency a New Yorker must be nominated. Surely the Democracy should learn wisdom from disastrous experience and defeat in that respect during the past twenty years. McClellen in 1864, Seymour in 1868, Greeley in 1872, Tilden in 1876, and in 1880 Hancock, who was more of a New Yorker than anything else, was also defeated. Our sagacious friend Spykens, who sets himself up for quite a political sharp, considers this simply a strategic movement in favor of Blaine, and that Ben Butler is at the bottom of it. Old Ben worked all sorts of roots to become Governor of Massachusetts, was defeated year after year as often as he tried it on, but at last succeeded, even as the cockeyed old warrior hopes to eventually succeed in. becoming President of this great American republic. And Spykens predicts that the Democratic party will nevermore achieve success till they nominate and elect old Ben Butler for President.

Hopkins, agent for the ENTERPRISE in this burg, has more lice than anybody. He has a large plum tree just loaded with them. A few big blue flies, somewhat smaller than humming birds, lighted on the tree, and four days after he found the green leaves perfectly alive with small green lice, hatching out from flyblows. On some of the branches they swarmed in huge clusters like bees, and in a few hours began changing to worms of various sizes and degrees of variety, devouring the leaves and sapping the twigs. He found the most effectual remedy was to trim off the limbs and burn them. His plum crop will be omitted this season. Several old Reese River pioneers who saw this affluent display of lice declared with tears in their eyes that it reminded them of the good old times. This seems to be an unusually good year for lice and worms in garden vegetables, trees, and even in grain fields. But the glorious old sagebrush, with its aromatic smell, and pungent, griping taste, is proof against all such creeping vermin, and flourishes in triumphant luxuriance and aboriginal beauty.

The other day I took a little ride out in the country, to Rooker and Soule's ranch in Reese River Valley, some sixteen miles from here. A friend, interested in beef culture, was with me and told me all he knew about the country -- more than I knew or could take note of myself. We passed Billy Jones' and many other notable ranches, also numerous miles of wire fences, through various stray streams and mudholes, and were hospitably received on arriving at our destination. It is principally a stock ranch, although a considerable portion of it yields heavy crops of hay. The erratic Reese sinks at this point for about ten miles, reappearing in full volume through some heavy springs just above Jones' ranch . Plenty of water is found half a dozen feet below the surface, and a handsome, very effective windmill, of the Althouse pattern, with pump and capacious tank, supplies all the water needed for the cattle and horses. A well of excellent, soft, cool water for domestic use is also near the house. Joe Porter, an old resident, has charge of the ranch, and Mrs. Wilbur is housekeeper, her husband being employed on the ranch.

After a very enjoyable dinner, or noon lunch, we went out to the corral near by and witnessed the interesting operation of branding a small drove of cattle which were brought in from Smoky Valley the day previous. Quite a number of Piutes, as well as white men, were employed, and some of the cattle being rather wild, some very lively, as well as dangerous, sport was experienced. In fact at times it looked much like a Spanish bull-fight. Three or four adventurous whites and Indians would be in the corral at a time trying to lasso an animal, yet all the while on their guard, ready to run for the fence in case of an attack from some belligerent cow or steer. Especially was this the case after an animal had been thrown and branded. The lasso being cast over his horns, he was speedily bowsed up to the "snubbing post," and another rope being dexterously cast around the hind legs, the unfortunate brute was speedily stretched out backward and thrown upon his side. Then the big branding irons heating in the fire just outside of the fence were passed in and made to burn large lettered devices upon the side and shoulder, and a peculiar clip with a sharp knife was taken from each ear. Then came more fun, for the moment the lassos were removed, the panting, infuriated animal sprang to his feet and went for his fleeing tormentors. Away they ran for the bars, climbing rapidly out of the way, leaning over and kicking their heels hilariously in the face of the snorting, pawing brute so savagely shaking his horns at them.

Jack, one of the Indians, was a little out of luck, or time, on one occasion. J.. furious steer, with smoking sides and bleeding ears, got after him so closely that, having one of his hands crippled, he could not climb out of reach soon enough. But, quick as a flash he dropped on his side and rolled close up to the bottom of the fence, where the animal could not easily reach or injure him with his horns before his companions attracted or drove him away. It was simply a well-known dodge, understood by all old bullfighters, and very cleverly executed.

It looked rough and barbarous enough to thus throw, burn and mutilate the poor beasts, but still further cruelty was reserved for the largest and oldest animal in the herd. He was a great slab-sided, raw-boned, long-horned old steer, a brand-scarred veteran, and evidently a pioneer. They seared his hide deeply with the seething brand, lopped his ears and even cut off his tail, and he stood it like a philosopher, but when the operator took an ax and whacked away at his horns to knock them off close to his head, he bellowed and struggled wildly. It was decidedly a brutal job, but said to be necessary, for that the animal never could get fat with those horns and that tail on him. After he was allowed to get up he cleared the corral of his tormentors directly, being evidently desirous of getting even on somebody, and feeling like a defeated and sore-headed political candidate. In fact he made himself so viciously obnoxious that he had to be turned out of the corral before the circus exercises could be concluded.

Day before yesterday we had a violent snow, hail and rain storm, which left the mountain tops well whitened, and next morning a heavy white frost covered the awnings, roofs, etc., along Main street. Rather cool and refreshing for the middle of July.

United States Mint Director, Hon. H. C. Burchard, arrived on the train last night. He is on his return to Washington from a visit to the United States Mints on this coast, and visited Austin, for the first time, in order to collect statistics of mining operations, mineral and bullion production, etc. He visited the mines and mill of the Manhattan Company, and will visit other localities on his way eastward, leaving here to-morrow morning.

The agent for Cole's big white elephant circus also arrived last night, and has been decorating the town with gay pictures and handbills to-day. The show is to appear here August 13.

The big Cornish plunger pump of the Manhattan Company, mentioned in my last letter, will start into operation next Saturday or Sunday.

When the Piutes left for the big fandango at Wadsworth, the other day, a dark-complexioned young man about town, who wanted to go in that direction and had no coin to pay his fare, rigged himself up as a squaw and passed along without any difficulty. The Piutes enjoyed the joke and didn't give him away. 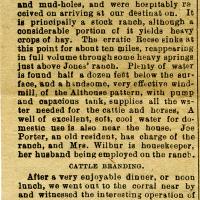