Aside from the general interest we all take in the troubles and trials of the Democracy at Chicago, one of the most important items of local interest, so far as this community is concerned, was the completion of the Austin Street Railway this day from the Nevada Central depot, at the mouth of the canyon, below town, through to the Paxton incline on Lander Hill, away above town. This is the highest point in the mines or mining works of the Manhattan Company desired to be attained at present, by the locomotive, although a few hundred yards more road will be constructed to a point opposite the Lander shaft, where a very steep tramway and stationary engine will elevate wood and supplies and lower rich ores, to and from the aforesaid shaft, where the most elevated and efficient works of the company are carried on. The railroad depot of the Nevada Central is about half a mile or thereabout below town, where Pony Canyon opens into Reese River Valley, and the entire length of the narrow gauge road belonging to the Austin Street Railway Company to the Paxton incline is something over two miles. The height surmounted is between 800 and 900 feet, or over 400 feet to the mile, constituting it the steepest plain railroad of its length in the United States or the world. The mill of the Manhattan Company is 500 feet higher than the Clifton or Nevada Central depot, and the Paxton incline works are 300 feet still higher. This new section of the railway, from the mill to the mines, has been surveyed and contemplated for some time, but has been made a practical reality only within the past two months. Winding around the steep hillsides, with the unprecedented up-grade described, it passes right among the principal mining works of the company, and will prove of great practical utility in the matter of transportation. Its completion and the passage of the locomotive through to the Paxton terminus this afternoon was made the occasion of local congratulation. The whistles of the mining works tooted a noisy passing salute, and the surface employees drank sundry kegs of cool beer brought up by the locomotive, direct from the brewery. Your correspondent incidentally had the honor of being the first and only through passenger over the entire length of the road. It is now and forever too late for any one else in the world to brag of this. The climbing capabilities of the famous locomotive, which is appropriately named Mule's Relief, are limited only to the height of the mountain it may be desired to climb.

The ten-inch Cornish plunger pump mentioned in a former letter as being put into the Frost shaft is now nearly ready for work, and will probably start into practical operation in the course of a week or ten days. It consists, in fact, of two pumps, from the Sierra Nevada new works, near your city. The ponderous pump-bob, from the Woodville works, Lower Gold Hill, is in position ready to connect, the powerful engine in place, and about half the pump rod is in. This is of Oregon pine timbers, ten inches square and in sections of from thirty-seven to fifty-two feet in length, very substantially spliced and strapped together. This pump will have a stroke of eight feet, and raise the water from a perpendicular depth of 570 feet. With nine or ten strokes a minute it is expected to raise 10,000 gallons an hour, and keep the entire system of mines at this point drained with perfect ease working half the time, or twelve hours in twenty-four. Under the direction of the old engineering manager, John Frost, all this heavy work has been mostly managed thus far without an accident or blunder. As for Superintendent Curtis, he is to be found everywhere in the thickest of the fray, making himself useful as well as ornamental, in the mines, in the mill, on the cars, surveyor, engineer, brakeman, shift boss and general roustabout.

A RUN FOR THE DOCTOR.

As we were returning from the mines, in passing a small house just above the Manhattan mill, a woman came running out waving her hands, and directly the locomotive came to a standstill. With tears flowing down her cheeks she shouted, "Oh, please won't you tell Dr. Hammond to hurry up here quick? My little girl is dying." Engineer Hale responded with a prompt touch of the lever, and away went the gallant little motor at a lively rate of speed for about a third of a mile, stopping in front of the drug store, where fireman Rice found the Doctor, who sprang on board, and in just seven minutes from the time the weeping mother spoke, the motor had performed its impromptu errand, and the Doctor was by the side of her afflicted little one.

Near the Frost shaft a pretty good sized tank, or reservoir, for water pumped from the mines has been recently constructed. It is twenty-eight feet wide and fifty six feet long and ten feet deep, and its full capacity is 118,000 gallons. This is intended for supplying the fire department hydrants down town and for door-yard irrigation, street sprinkling and all that sort of thing. There is another reservoir of smaller size near the mill, heretofore used for the same purpose, but this new one is over 200 feet higher, with that much more pressure.

The fruit crop from California is fine and very abundant. It would be cheap, were it not for the costly freight. In fact, a fellow feels as though he was eating freight instead of fruit, and the cost lies heavy in his stomach as well as purse. The vegetable crops about town and on the ranches are splendid, and so are the grain and hay crops. The sagebrush never looked more verdantly luxuriant, and flowers of all styles of beauty and limited degrees of fragrance cover the hills and valleys. But among all the vegetable productions of this State, I have not yet seen any of that peculiar husky vegetable so plentifully and universally known over in California as

I was mentioning this circumstance to Mr. Dadd, the other day, and he agreed with me that such was the fact; he, one of the oldest pioneers, had found none here. He considered it an important element of prosperity which was lacking, and had felt lonely without it ever since he left the old California diggin's. Says he: "When I was minin' jest below Dutch Flat in the Spring of '52, me and my partner was out in the hills one day and we found some green shoot growin' that he said was wild mustard. We gathered a lot, and next biled it with some bacon for dinner. It tasted fine, and we both took in a pretty good feed of it. But in less'n an hour we commenced to bloat up and swell and feel like we was going to bust. Next thing we got to frothin' at the mouth, and was afraid we was pizened. We didn't feel sick any, but mighty oncomfortable. The white froth jest rolled out of us, and directly we dropped on it that it was young soaproot stalks we had been eatin'. For over three hours the soapsuds jest biled out of us by the wheebarrow-load and was knee-deep all over the cabin. Jim had a small mouth and bad delivery, so it served him wuss than me, for--- Yes, thank ye, don't mind if I do take a little beer."

Butterflies are very numerous throughout Austin, and all the juvenile whites and Piutes are after them with little hoop nets, bunches of sagebrush, old jackets and all sorts of contrivances. It is not safe or pleasant to be a butterfly.

The disease which has recently become so prevalent here, is professionally stated to be epidemic influenza, appearing and developing locally in the throat, but affecting the entire system.

The farmers down in the valley have commenced cutting their hay. In some places along the river they will have to use boats, or wait till next season.

Stillwater Thompson and other Piutes have fitted themselves out with new linen dusters and whatever than can pick up, and gone to Wadsworth to a big fandango. 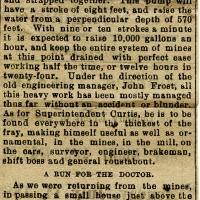