The Democratic State Convention, like a political cloudburst, as it were, has visited Austin, passed away, and the staunch old town comes out bright and smiling from the portentous episode. The visitation was short and sweet, and unanimously enjoyed while it lasted. The popular objections to it were its brevity, unanimity, numerous proxies and its consequent degree of unprofitableness. Only fifty-seven out of 111 delegates coming to a political convention—in an expectant town—is a grievous wrong. True, the delegates spent considerable money, yet they did not show any very remarkable degree of Democratic recklessness in that desirable respect, although the boys stood up to the bar manfully with them whenever they slung out any inducements. Of course there was much financial nutriment in it, but had it lasted three days instead of one, it would have been three times as profitable. There is getting to be too much Republican unanimity in these Democratic Conventions—also too many proxies. It hardly pays to fit up new saloons for the occasion.

Ran through all its business on Tuesday evening, and the delegates departed by railroad or private carriage before next morning. It was like a circus in some respects, having its ring-master and its clown. And it was also some like a Congress. Its "Websterian" representative or prototype was the ponderously eloquent Cresswell; its Clay, John H. Dennis; its Calhoun, Sadler, of Eureka; its Douglas, Canavan, of Storey, and its "fiery Rupert of Debate," Hagerman, of Reno. Colonel Jerry Moore looked out of place, and reminded one of the old story about the little story who accidentally got among a lot of crows, and his fate will be similar. Colonel Hardesty, of Elko, carried his head nearly a foot higher than any of them, and had the least to say. He is just half an inch taller than Dunphy, the other great cattle man of this section. How is it that most of the great cattle kings or bovine rulers of the sagebrush, whose domains and cattle and sheep cover thousands of hills and numerous valleys, monopolize more of the public lands than anybody, are Democrats? The platform and resolutions of this convention have been published for the public edification. As Colonel Ellis, of Carson, read one plank after the other, each prominent [… line missing] applauded, even to that peculiarly significant one opposing any division of the public school funds or sectarian purposes. The regular biennial Democratic arrangement of the Republican party, the nomination of Cassidy for Congress, and Sewell for Justice of the Supreme Court, by acclamation, and everything else passed off harmoniously till it came to nominations for the six delegates to the National Convention at Chicago. Then came

Senator Fair was placed in nomination as a delegate. Captain Matt. Canavan had already been given a special acclamatory nomination, and it was proposed to compliment Senator Fair the same way. Somebody filed a demurrer, others demurred and argued, and the hitch became a remarkably vigorous wrangle. One delegate got in a remark about worshiping the golden calf, meaning Fair, and another delegate ambitiously, yet inconsistently, claimed himself to be the auriferous juvenile ovine referred to. Explanations, appeals from decisions of the chair, points of order, and all sorts of parliamentary rackets were tumbled up, and the wrangle rolled forward into wearisome monotony. The Chairman, G. W. Baker, of Eureka, proved himself a trump, and all hi rulings were sustained. Fair's real friends insisted that this being a Tilden and Hendricks Convention, his name should be withdrawn, he having in times past expressed his opinion that Tilden was not capable or suitable man for President. The Storey county delegation unanimously opposed Fair's nomination for this reason, and as a matter of justice to him, considering that he would himself object to being pledged or in any way bound with the other delegates to the support of a man he would not have for President. This useless and exceedingly detrimental wrangle was finally brought to a close by a ballot, in which Fair was left away out in the cold, and with nobody to thank for his being thus injudiciously slaughtered in the house of his friends.

The first regular entertainment of the Savannah Minstrels was given at International Hall evening before last, and was well attended. The company consists of about a dozen Austin youngsters, including three young misses, two of whom are very small in stature, but are really possessed of no small degree of musical and artistic ability. They appeared in songs and character acts very creditably, and all hands did very well in their burnt-cork variety performance. Master Willie Howard, the leading minstrel, is a genuine colored youth of about fifteen, born and raised in Austin, and in song, dance and general acting exhibits a remarkable degree of talent, and a natural adaptability for that line of business.

Much rain fell yesterday; in fact, the clerk of the weather gives us each day our daily rain, and the sagebrush never looked greener or more flourishing. 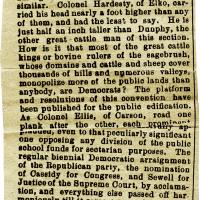