The weather throughout this section has been principally rainy for the past few weeks, but one of the principal sensations of the last few days has been the Annual Convention or meeting of the Grand Lodge of the Odd Fellows of this State. The parade on Thursday of the Grand Lodge, escorted by the Encampment and Austin Lodge, No. 9, preceded by our local band in full uniform, was very fine, and the exercises at the Methodist Church peculiarly interesting. Some neat and felicitating speeches were made by H. T. Creswell, Grand Master W. J. Smith, D. O. Adkison, George H. Morrison and A. D. Rock, and the singing by the choir was the best I have ever heard on such an occasion.

Mrs. Prisk, fairly exceeded all her former efforts. She is endowed with a clear, rich soprano voice, of remarkable purity and power, and her solos were given with bird-like sweetness and effect. It will be borne in mind that Miss Wixom, the "Emma Nevada" now achieving such magnificent success in the operatic circles of Europe, grew up from childhood here in Austin, developed her wonderful powers as a singer, and from here went forth to her triumphant career in the musical world. By many, Mrs. Prisk is considered to possess nearly or quite as fine a voice, in some respects, only requiring proper cultivation and opportunity to give it full effect.

The fraternity of Austin did their level best to entertain their brethren from the rest of the State, and succeeded most admirably. They gave them the best of everything to eat and drink, showed them everything of interest and tried hard to get up an old time cloudburst, being perfectly willing to have half of the town washed away if it would conduce to the sensational entertainment and novel pleasure of their guests; and this morning a couple of flat cars, fitted up with seats, took them down the steep railroad grade from town to the depot at Clifton, from whence they took their departure on the regular train for their respective homes at 2 o'clock A. M. A large assemblage of their brother Odd fellows, friends and townspeople cheered lustily as they left town, and they cheered lustily in response. Our people feel very grateful for this fraternal visit, and would be happy to have it repeated every years.

Owing to the copious rains and melting snows Reese river has, within the past two weeks, succeeded in running through to a connection with the Humboldt at or near Battle Mountain, something it has not achieved since the spring of 1874, ten years ago, when it thus wildly flowed for two months. And, as I have before stated, according to the statement of Mr. Dadd, George Watt, Alex. McCafferty, John Leutjens and other veracious Austin pioneers, trout and sturgeon, as big as saw logs, came up the river from Humboldt Lake. But now the rise in this famous river comes as a special and unwelcome calamity, for it has washed away the railroad in one place, about half way between here and Battle Mountain, and threatens other points. In fact, it has interrupted mail and passenger communication to a limited extend, and but for the most active exertions on the part of the railroad company, the interruption would be really disastrous.

Last Monday night, when the Odd Fellows were coming up, they were detained at the washout five hours before the track could be fixed, so as to allow them to pass over and onward. It was very rough on the brethren to be thus cast away, as it were, a long distance from home or any reliable source of supply in the shape of food or drink, and there was, consequently, a considerable amount of skirmishing after anything to be found in the shape of eatables or beverages. Somebody found a nice basket of lunch, which George Stewart had lain in, and confiscated the contents for the benefit of the crowd without waiting for George to do so. There were lots of deviled ham sandwiches in the outfit, and they were not slow in being placed where they would do the most good. Uncle George Tufly got a bite, but here's what he says of it: "Oh, Dot Pilly Rogers, der gay poy from Elko, he gifs me der pread fon der sandwiches, und eats all der devilish ham himself."

Uncle George rather likes Austin and the people generally, for he has crowds of friends here. Sayd he: "Ph shingo! Der sageprush looks pully, unt der hills is shust so green as Carson, but vot a tang queer river is dot Reese. Vay down to Paddlemountain it's no pigger as a Tutch prewer could dhring; but it kits pigger as you kits up to it, vhere it ought ter git schmaller, unt blays hell mit der railrote. Der tam schtream was pilt der wrong end up hill. Dots vots der matter."

But Uncle George goes home happy in the possession of one of the richest and prettiest specimens of ruby silver ore to be found in these mines, presented to him by the Manhattan folks. It weighs about three pounds, and will assay over $5,000 to the ton. Fifty American dollars couldn't buy it now, and Uncle George exultantly shows it to his envious contemporaries, telling them how much better he is appreciated than they, and how a man of 300 pounds responsibility and true moral goodness will always be favored before any ordinary human shrimp.

By special invitation I visited the public schools in this town the other day. The school building is principally of brick eligibly situated in the upper part of town, and consists of four departments—high school, first and second grammar and primary—employing four teachers. The average daily attendance is about 200. The high school, conducted by Professor S. D. Bristow, Principal, has an average attendance of about thirty-two scholars and among the higher branches taught are algebra, geometry, rhetoric, chemistry, physiology, etc. There are some very bright youths in this department, and their achievements on the blackboard, in both figures and writing, were very creditable, and their ready and generally correct replies showed evidence of very careful and judicious training. The first grammar department, conducted by Professor J. B. Cowden, has forty-eight scholars, and a very good degree of advancement is noticeable in the various students. In the second grammar department, Miss Kate T. Gallagher, teacher, there are sixty-nine scholars, and in the primary department, Miss Fannie J. Work, teacher, fifty scholars. The scholars are ably managed, and creditable advancement is the result. The rooms are well lighted and ventilated throughout the building, but certain improvements in construction could be advantageously made. No such degree of interest or effort in the management or conduct of the scholars is manifested here as is seen in the Reno, Comstock or Carson schools, parents, guardians or even the Trustees rarely visiting the schools. This is complimentary, as showing the implicit degree of confidence reposed in the teachers, all of whom are talented and well qualified for their respective positions. As for the scholars, they are generally smart and intelligent, about as much so as those of other parts of the State. To say they are not would be a reflection upon their parents and their home management

The nomination of Blaine this day was the occasion of a high degree of excitement in Austin, as no doubt it was to a greater or less extent in other parts of the nation. An eager crowd gathered in front of the telegraph office, reading the result of the various ballots posted in the window as fast as received, and when the final announcement of Blaine's success came, the glad news spread like wildfire, and directly the steam whistles gave a startling salute. Up went flags, and down went the beer into many a rejoicing throat, and scores of hilarious revelers were soon shouting and hurrahing for Blaine. At dark the brass band, in full uniform, marched with numerous citizens up to the Manhattan mill, where a train of six flat cars was fitted up,, and as the shades of evening gathered the train slowly moved down the track through town and up again, the "Mules Relief" locomotive being attached. Four large iron baskets of fire blazed from posts on the cars, and the crowd of citizens on board bore lighted torches and waved the old Stars and Stripes, as the band played "Hail, Columbia!" and other patriotic American airs. And mounted on the end car was a lively little cannon, which belched forth small thunder at frequent intervals as the train moved along. It was a brilliant and novel sight, and a sort of wake to the dead hopes of the Democracy. Now let them trot out their old Presidential corpse, Sammy Tilden, and we'll bury him so deep that the sound of the resurrection trumpet will never reach him. After passing down and up street this torchlight procession on wheels dissolved and dispersed, but much jollification was kept up the rest of the night.

The old pioneer says no white man ever saw Reese river so boomingly high before. It really is quite a sizeable river in this vicinity, but gets much absorbed and attenuated before reaching the Humboldt. It is of the catfish or sculpin style, more head than tail.

I know most of the delegate members to the Grand Lodge personally, and all seemed to have grown older in the last two or three years except D. O. Adkison. He looked about as old fifteen years ago, on the Comstock, as he does now. Like a Chinaman's donkey, after reaching a certain degree of age, he can get no older.

The next sensation in this mad whirl of public excitement will be the Democratic State Convention here on the 10th—next Tuesday. The recent Democratic primaries in Austin elected delegates not favorable to Cassidy for Congress. So Matt. Canavan will find himself perfectly at home here, if he feels Congressionally inclined. The saloons are all doing a fine business now, and look forward to the coming convention as a big bonanza. 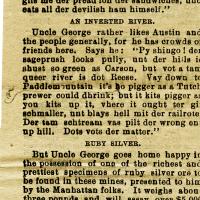