The present moon commenced wet enough, but has dried out finely since. We have had three days, now, without any snow or hail squalls, encouraging us to presume that the mythical backbone of Winter has been broken for the last time, so far as the present Spring is concerned. Nobody weeps to see the genial sunshine, and especially bare ground once more, and the grateful sagebrush, resurrected from its frosty winding sheet, is sprouting and greening forth in spicy fragrance upon the breezes of Spring. Babbling brooks are somewhat scarce about here, and so are babbling birds, except turkeys, hens, ducks and other domestic fowls, but the chances are not good that the numerous locusts and poplars which embellish Austin homes will be all leaved out and verdant by the 10th of next month, when the Democratic State Convention meets here.

Throughout the Reese River section, as well as the rest of Eastern Nevada, the farmers have been, and still are, very busy putting in their crops, and more hay, grain and potatoes will be raised this season than for several years past. This refers to the valleys and creek bottom lands, but let it be also known and appreciated that the home domestic ranchers are not idle. They are at work, and the chances are that there will be more spading up of door yards and back yards for agricultural and floricultural purposes than for several years past. And about now it is that the locust trees are receiving their regular annual trimming. For some unaccountable reason, it has become a general, unmitigated observance throughout Austin to keep the locust trees, particularly, well headed down, and therefore it is that this variety of tree looks scrubby and subdued. In fact, the habit has become so chronic that in many instances, where the old tree trimmers have methodically disregarded last year's growth, the trees grow shorter and shorter, and consist of merely dwarfed trunks and discouraged, stubby limbs, with no hope of heavily extensive foliage. Owing to this arbitrary trimming observance, all the trees in town put together would not furnish half enough shade for an old-time Comstock picnic. Not so, however, with "garden sass." Everybody with a door-yard which will justify it buys vegetable seeds by the quantity and sows the same liberally, regardless of expense or limited territory. The Austin domestic rancher allows that he who makes two blades of grass grow where only one grew before, does tolerably well, but if he can make seventeen beets grow where there is only room for one, he knocks spots out of the two-bladed grass man. Our genial County Assessor, Alex. McCafferty, who has got married and settled down, is deeply absorbed in Horace Greeley's famous book on farming, and out of the seven loads of good dirt he has had hauled into his door-yard he expects to realize seven loads of cabbages, to say nothing of his beds of hominy, pearl barley, sage and other farinaceous shrubs, of which he is very fond. He is very liable to find that in agriculture it is sometimes easier to assess than to collect.

The Manhattan mill started up again last Monday for a long and prosperous run after a judicious rest since February 20, principally for much needed repairs and renovation from its previous run of sixteen months. The whole concern received a thorough overhauling, and sundry advantageous improvements have been introduced. Meanwhile some of the well known old employees were given a welcome chance for rest and recuperation. Charley Durning, the long time Superintendent, put on a boiled shirt and store clothes and took a cruise down to San Francisco and other sections of the golden land of sunshine and flowers. James Sullivan, the manager of the Stedefeldt furnace connected with the mill, laid off on his laurels and fixed himself up for another run of five years, if required. But Jimmy Robinson, the ore receiver, weigher and sampler, took a wider range. He went to the Sandwich Islands. There he gorged himself with bananas and yams, hobnobbed with King Kalakaua, admired Daggett, roamed among the orange groves and taro patches and was happy. And the trip to and fro across the blue Pacific was glorious. The salt sea breeze thoroughly chlorinated the rich ore dust which has so completely filled and saturated his system during his sixteen years' run in the mill, and he came home to resume his old post as efficiently as ever, for another sixteen years. The other old hands are in place, and the mill, machine shop, foundry and other concomitant arrangements all fall in to work together harmoniously and prosperously.

While the mill was resting and recuperating, the mines were not at all idle, by any means. The regular ore resources were actively developed, and new work pushed ahead at all eligible points, new stopes opened up and plenty of ore accumulated, assuring an indefinitely long run of the mill. Some very rich ore has been taken from the lander shaft of late, and the munificent yield still continues. Some specimens of the beautiful ruby silver, a foot thick and worth $3,000 or $4,000 a ton, from the Lander, were brought to the office of the company, near the mill, a day or two since, and are on exhibition. If that little vein was only a few hundred feet wider, it would very perceptibly decrease the price of silver in the financial markets of the world. But that's the grand trouble here; these exceedingly rich veins are limited to a very few inches in width, and although very reliable in the matter of continuity, vary exceedingly in the matter of size and situation. A five or six-inch bonanza is liable to break off suddenly at any time, yet the old-experienced miner knows very well that he has only to drive east, beyond the break, to find the continuation. But he may have to drift far enough to break him before he gets through. Nevertheless, the numerous chloriders, tributers or leasers, like old California gold-diggers, prefer to take their chances, instead of hiring out for "day's pay," and some of them make nice little piles by so doing, while others, of course, merely subsist along, year after year, and with the assistance of the company.

The big Cornish plunger pump being put in at the Frost shaft is one of the most important improvements in that line yet adopted in these mines, and will most assuredly prove to be so. As mentioned in a former letter it is a ponderous, double affair, from the Comstock. The large excavation for the powerful pump-bog is slowly but substantially being filled with the requisite masonry for the anchor bolts, etc., and some of the big bed timbers are in place. Another month will make a well advanced showing. Each department of the work is in very competent charge, and when done, all will be well done.

The West Point cadetship would seem to be a hard point for the Commissioners at Winnemucca to decide. Yet should they decide in favor of our Austin boy, Robbie Eames, who was not behind any, at last accounts, nobody here would object. It will have to be an exceedingly smart and meritorious lad that will beat young Eames. And the young man that succeeds not only here, but at West Point, will simply be made for life. What grander prestige could a truly American youth desire than simply this one cardinal point of success?—West Point.

Wiggins' weather predictions never fail. They are sure to come true somewhere or somewhere else. And so, too, with the Washoe Bowers Seeress. She predicted that Reno would be destroyed by fire in the latter part of April or the first of May. But it was Wadsworth that was destroyed instead. She wasn't forty miles out of the way, which is more than Wiggins can brag of generally. The insinuation that our Washoe Seeress was subsidized by the insurance companies in this matter is both mean and unjustifiable.

It is politically pleasant to hear that the Republican delegates to Chicago go unpledged, although not uninstructed. They are good, square, sensible men without exception, and in the case of Blaine is not nominated on the first ballot, and a dark horse is required, he might be found in Austin. But modesty forbids any suggestions on my part.

Cassidy's speech in Congress on April 1, relative to the retirement and recoinage of the trade dollar, and the silver question generally, was one of his best efforts, and very creditable to a representative from Eastern Nevada and the Pacific Coast. It had a decidedly Jonesy ring to it, and, by-the-by, Jones himself is liable to express himself on this exceedingly interesting subject before long.

Local politics in this section do not boil just yet, but will in due time, when I will try and give you the true inwardness of the matter and the various points of interest at stake.

The World's International and Cotton Centennial Exposition at New Orleans will be most worthily represented by Colonel C. C. Thomas, whom we all so long and favorable know, in behalf of our young and ambitious State. It has been suggested that he should commence calling in Nevada mineral contributions at an early date. The richest and most beautiful specimen of silver ore from this State at the Denver Exposition was from Austin, and Austin is prepared to send something even finer and better to New Orleans. ALF. DOTEN. 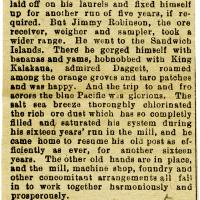