An old Pacific Coast pioneer, who is about fifteen years ahead of the Reese River pioneer in the matter of truth-telling, naturally relates some very interesting stories and reminiscences regarding Spring weather on this coast. March has generally belied herself in the matter of being considered the stormiest month of the year, and May, the gentlest, floweringest month, has frequently exhibited some very unexpected, as well as uncalled-for and unseasonable weather eccentricities. Of course, all the old-timers tell wonderful stories of hailstorms in July, and we all even remember how Tom Fitch, the silver-tongued, etc., was forcibly interrupted in the midst of one of his best Fourth of July orations, a few years ago in Gold Hill, but the tremendous roar of a fearful hail-storm rattling upon the roof of Homestead Hall, in which the exercises were being held—every hailstone as big as a small potato. But for regular heavy snow-storms, May has always stood in handsomely and done more than her part. Last May we had three inches of snow here on the 1st, three or four more on the 6th and 7th, about four inches on the 15th, three inches more on the 17th, and a heavy hail-storm, by way of variety, on the 3st. But the old-timers here tell of heavy snowfalls sometimes in June. A. S. Learned tells me that about the middle of June, 1872, he was out on a little fishing and hunting excursion with General E. S. Davis, J. A. Wright and two or three others, on the headwaters of the Reese river, when a heavy snow-storm gave them fully eighteen inches of snow to wade through. They were fortunate in finding a lumber camp on one of the forks of the river, and they piled up a lot of timber, forming a very comfortable shelter. They also had a good supply of whisky along, and filled up on hot toddies and punches, and were able to shout hilarious defiance at the unseasonable elements. And they found plenty of fish and game also, and, better than all, came home to Austin with over 900 fine trout, to say nothing of rabbits, quail and other small game.

On the 12th instant passed off very quietly, and three good Blaine delegates were elected to the State convention in your city next Wednesday. Only about three dozen votes were cast, but there was no opposition, and the Presidential preferences indicated on the tickets were nearly unanimous for Blaine. Only one patriot voted in favor of Grant, evidently with the idea that he did not like to see the grand old American chief left entirely out in the cold. Straws are said to show which way the wind blows, and surely this three dozen votes was a mere straw as compared to the real Republican vote of this populous locality. As goes Austin, so goes the nation, of course, consequently Blaine will be hilariously nominated at Chicago on the first ballot. It is pleasing to note the general unanimity and enthusiasm of Blaine's numerous admirers in this section as well as elsewhere, and few of them have any doubt of his nomination, any more than they have of his being qualified for and deserving the Presidency. Yet very few seem to question the real political expediency of his nomination, or to consider the possibility that the Democracy may put up a man whose political record is cleaner and more popular, and whom the solid South, in combination with some millions of Republicans, may elect in preference to Blaine, the plumed warrior from the tall timber of "away down East." Blaine is apparently the most popular of Presidential aspirants, but all practical Republican party men will bear in mind that the candidate possessing not only popularity, but the greatest elements of strength, is the man required. In politics, success is everything, and defeat is simply an unpardonable crime. Eastern Nevada, however, seems determined to mount the Blaine hobby with the rest of the country, and ride it regardless of all chances of losing the race.

The new medicine man of the Piutes, in their little village on the hillside south of town, is now doing his level best in the way of medicated howling, so to speak, every night, and as often as he can raise his voice during the day, against the evil spirit of disease which is assailing their little community. The fate of the doctor whom they took down in Churchill county last Fall and stoned to death, and his successor, whom they also felt obliged to similarly dispose of a few weeks ago, stares him in the face, and nerves him to more strenuous efforts. He has lost one patient already, and a second is very shaky. Too well he appreciates the chances of retribution upon his devoted head in case of a third being lost, and the poor aboriginal medico hardly eats or sleeps, and is hoarsely howling, literally for dear life. He dares not leave, for he knows they would follow and kill him, and he can only stay and battle with disease and manifest destiny. At one time last night his second patient had a sort of measly cramp or colic for a few minutes, and the way the poor doctor did bounce out of the campoodie and desperately howl was piteous to contemplate.

As heretofore remarked, we have a well organized military company here in Austin which has just been supplied with a full set of new regulation forty-five-caliber guns by Adjutant General, Lieutenant Governor Laughton. The boys are very proud of their new weapons, and have a grand uniform and target excursion every Sunday. Their greatest ambition is to beat the record of the once famous Sarsfield Guard, of Gold Hill. It is said that Cara's noted brass band, in your city, has fallen into a decline, in which case the National Guard band, here, is the best in the State. Two or three of its members formerly played in Cara's band, and one of them, Fred O'Brien, is unequaled as a performer on the tuba—the big horn that a man gets inside of, as it were, blows around himself a few times and discharges a continuous stream of ponderous notes from the smoke-stack, over the top of his head. Notwithstanding its ungainly appearance it is an essential power in the band, and yields good music under skillful manipulation. It used to belong to Dick Chegwidden of Gold Hill, and during the few years he played it in the brass and string bands of the Comstock he stuffed it full of harmony, which O'Brien finds easy to blow out as occasion requires.

The measles, or rubeola, as it is professionally termed, is abating very rapidly. The epidemic disease which has to thoroughly swept through among the juveniles of Austin during the past few weeks resulted fatally in only three instances, although there has been over 200 cases of it. Generally speaking, it seemed to be a cross between Measles and scarlet fever, mild in most cases, but bad in others. Measles should never be called anything but rubeola hereafter, for most people are eternally getting the singular and plural of measles worse mixed than the disease itself.

The snow along the summit of the Toiyabe range has melted off considerably under the benign influence of the nice Spring weather of the last few days, and loads of wood are once more being hauled to town from the ranches of the Smoky Valley slope.

A prominent grocery man was paralyzed a day or two ago by a man inquiring for canned limburger. He rallied, however, and informed his would-be customer that it had been found to be impossible to confine limburger in cans, but when hot weather came, by-and-by, if he could find a swelled can of rotten oysters he would save it for him.

It rained and snowed finely here yesterday. The backbone of Winter seems to be again fractured, but the weather is still anything but settled. As Blauvelt, of Gold Hill, used to so originally and felicitously remark, "Winter still lingers in the lap of Spring." 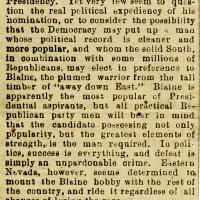