The greatest and most domestically extensive sensation prevailing here at the present time is the measles and scarlet fever. The two diseases seem to have made an offensive and extremely effectual combination against the peace and welfare of this community, not neglecting any child or young person who has not thereby been afflicted before. Only one or two cases have resulted fatally thus far, but others are now verging upon death. The epidemic apparently commenced with the measles, about six weeks ago, yet one physician declared the presence of scarletina or scarlet fever from the first, and the result indicates that he was right. Ordinarily the measles is regarded as among the necessities and accomplishments of childhood, something no well-constituted youngster should do without. For one to be able to say that he never had the measles, merely indicated that his early training had been sadly neglected, or his preliminary constitutional requirements were not completed, a crime which nothing short of malignant confluent smallpox could expiate. But scarlet fever is much more to be dreaded from its more fatal results and the lasting effects which it is said to entail upon the constitution, sometimes real and sometimes purely imaginary.

Lieutenant governor Laughton's unexpected visit here, last week was an unexpected visit here last week was an occasion of as much holiday hilarity as if a circus had come to town. Our local brass band turned out and serenaded him on his arrival in the evening, and next morning early they serenaded him again. The band consists of sixteen pieces, and with their handsome new uniform they presented a very creditable appearance. Being attached to Austin's crack military corps, the National Guard, it was appropriate that they should thus do honor to the Adjutant General of the State Militia. And they did not neglect him in the least, but serenaded him some more, every time they thought of it. All day, in the frequent intervals between refreshments they played either from the balcony of the International or their armory, or on the street, or somewhere, and until away late in the night some of them were still unabatedly blasting away. It was in reality a spontaneous impromptu musical ovation, of which Laughton might well be proud. This is now the best band in the State, outside of Virginia City. In the afternoon they succeeded in corralling Laughton in one corner of the armory drew a fiddle on him, and in compliance with unanimous request he favored them with a few choice specimens of his well known artistic skill on that king of all instruments. Jeff. Hall, ex-County Commissioner, and a leading member of the band, was right off from a bed of sickness to which he had been tied for several weeks with a sort of rheumatic fever, and as he sat wearily on a bench, slowly rubbing his rheumatic legs and complaining of his painful weakness, Laughton was tuning up the violin. Then he drew out a few harmonious flourishes, and launched forth on a bright rippling stream of operatic melody which made Jeff fairly squirm in his seat. He swung his ears forward like a Washoe mule and took it all in, and when, with a richly rounded musical peroration, Laughton concluded, Jeff sprang to his feet spry as a bucking goat, slapped him on the shoulder, shook him by the hand, and hilariously declared that no such music had been heard in Austin since Parepa Rosa was here several years ago. It is seldom that one sees a poor, miserable convalescent so suddenly and effectually galvanized into life as was Jeff Hall on this occasion. The band couldn't play without him all the rest of that day, and he has felt better for his harmonious medication, so to speak, ever since. This military company includes among its members a number of excellent marksmen, but they could do no credit to themselves with the old fifty-caliber guns they were provided with. They have not just received a full supply of first-rate forty-five-caliber guns from Lieutenant Governor Laughton since his return to Carson. With these new guns they feel sure they can knock out a chipmunk's eye at 100 yards in less than six weeks' practice.

The Manhattan Mill still reposes in status quo, getting ready for another prosperous run, and will start up again about the 1st of next month. Meanwhile Superintendent Curtis has been actively advancing his mining work in all directions, and the result is a goodly accumulation of ore, with plenty more in sight and in prospective, so that when the mill starts again it will not lack for ore to keep it running for a good long time. All the various mining works of the Manhattan Company are in good effective condition, and operating to the best and most economical advantage. Owing to the famous narrowness and eccentric variations of these ore veins, a large amount of prospecting and dead work has necessarily to be done all the time, but the whole is conducted systematically and with excellent judgment, constant watchfulness and engineering skill being brought to bear throughout.

For the first time in the history of this mining district a genuine Cornish plunger pump is being introduced, or, rather, a pair of them. And they are from the old Comstock--two ten-inch pumps, from the Sierra Nevada new works. The pump bob is that of the Woodville works, Lower Gold Hill, and notably strong enough for anything that can be required of it here for several years to come. These pumps are about being placed in the Frost shaft, and will pump from a perpendicular depth of 570 feet. This will correspond with the 800 level of the Lander shaft and the 1800 level of the Paxton incline; in fact, forming a new water level 200 feet below the present general workings, with the best possible facilities for extending as much deeper as may be required in future operations. An immense excavation has been made in the solid rock at the west side of the shaft, for the bob and the pump engine, two new boilers and smokestacks have been placed in position, and under the efficient supervision of John Frost, the well known old chief engineering mechanic of the works of the company for nearly twenty years, or since its first organization, the work is being properly and substantially done. The principal part of the material, even to the pump rods, of Oregon pine timber, ten inches square and sixty feet long, are on the ground, and the huge castings for the pump gearings, etc., are being made at the Fulton foundry, on the Comstock—not that they could not be made here as well, but there is not the requisite iron on hand. When these pumps are placed in full working operation, they will keep all these mines drained with perfect ease, and not work half the time.

Sometimes I wonder if the rest of the world is as well favored with snow as Eastern Nevada. It did not snow much last night, but we had a full inch the night before, and snow-squalls prevailed yesterday and last evening. The sky is comparatively clear this morning, but the chances are in favor of more snow before night.

The farmers of Reese River, Smoky and adjacent valley ranges are hilarious over their prospects for big crops of grain and everything else this season. The Austin baby crop is turning out liberally, but not altogether owing to the weather. It seems to break out periodically, something like the measles.

Blaine men are plenty enough in this section in the way of ideals for the next Presidency, but there are also numerous warm indorsers of the old chief, Grant, for that highest and most honorable American office, regardless of special prejudices against second, third, fourth or any other particular number of terms. What the Republican party substantially requires is success in that very important and essential matter, and the strongest element or elements should be brought to bear to that end. And let it not be forgotten that the unterrified Democracy have similar ideas on the subject themselves, although in a different and perhaps more effective direction.

Why is it that a writer for the press cannot possibly write the letter u (you), in a proper name so that the intelligent compositor will not make an n of it? He may form the letter ever so laboriously, underscore it, and all that sort of thing, but it will come out wrong in spite of all precautions. I have come to firmly believe that were the intelligent compositor aforesaid to set up his own obituary, he would obstinately and designedly spell his own name wrong, if it was the last act of his life. 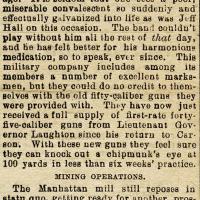