Eastern Nevada is enjoying a glorious boom of beautiful snow weather at present, which seems exclusively for the benefit of this particular section, taking in Eureka and contiguous localities, and quite a distance south of here, but not north to Battle Mountain and along the Central Pacific. It commences snowing just at sunset every evening, regularly, and deposits from four to eight inches before morning. Over six inches fell last night. The sun comes out every forenoon and melts off some of it, and in the afternoon it clouds up again for the night's performance. If it would only give some rain, instead of all snow, it would seem some like the famous Winters of '49 and '52 in California, when there were big hail and snow squalls with steady rain between. Now is the Winter of our discontent, in some respects, for ranchers, wood haulers and other outsiders can't come to town conveniently to bring things for sale and spend their money for things they need; consequently, business is dull, and the mill being shut down, does not help matters any in that respect. The mines, however, are working right straight along, and accumulating much rich ore for another prosperous run of the mill.

It is very rarely that Reese river gets up on its hydraulic ear, floods the valley and goes booming through to a conjunction with the Humboldt. About once in a dozen years, though, it is said to do that. But it has to flood and thoroughly soak the valley first, and have the aqueous material to do it with. George Watt, the veteran rancher and legislative statesman, and Alex. McCafferty, our popular Democratic County Assessor, who takes an interest in water occasionally, both inform me, on their honor as old pioneer settlers, that in the Spring of '74 Reese river ran a good, big stream, booming, rolling and flowing clear through to the Humboldt, for fully two months, every day and regularly. This is corroborated by many other old timers and Piutes, and perhaps this confoundedly stormy March, with its chronic storms and huge piles of snow, may produce a similar boom in this famous river. And they say that trout and sturgeon as long as fence rails come up from Humboldt Lake, which I believe, because Mr. Dadd and John Leutgens say they fished for them, but when they come to remark that whales, crocodiles, unicorns and other nautical monstrosities also came paddling up the mighty Reese, they can tell that to the horse marines and other proverbially credulous persons.

In my last I made mention of our Piute fellow citizens being obliged to kill their latest medicine man by braining him with an axe and some rocks, on account of his having lost three patients in succession, and being also discovered to be a witch. They saved the clothes from the body, and dragged it over to the other side of the hill, where they chucked it into an old prospect hole. There it would have remained exposed till yet, had not some interested friends and relatives of the deceased growled about the matter, and taken upon themselves to go and fill up the hole. By reason of their having to kill their two last medicine men, no other Esculapian or hygienic Piute has felt impelled to generously volunteer his services in the good cause, but some one will, for a heroic ambition for medical honors and distinction inspires them, and they recognize the justice of the fatal contingency. We boast of our civilization, yet see how much the Piutes are in advance of us. Why should the spirit of white mortals be proud? Give it up.

A meeting of the Lander County Republican Central Committee is to be held here to-morrow evening for the purpose of making arrangements for the requisite primaries for the election of delegates to the State Convention at Virginia City, April 30. That convention will select the delegates from the State to the National Convention at Chicago, June3, which is supposed to nominate the next President of the great American Republic. It is gratifying to know that the Democracy have decided to hold their State Convention June 30, here in Austin. Not that Lander County requires the injection of any fresh backbone material, for there is plenty of it here already, but it will bring welcome railroad, hotel and saloon receipts, which cannot fail to be admiringly appreciated. One hundred drinks apiece for 111 delegates, at two bits a drink, will be no insignificant or unacceptable sum, to say nothing of the army of attendants and interested hangers-on, all of whom will necessarily contribute to Austin's financial aid and comfort. Perhaps, however, it is all for the best, so far as the Republican party is concerned, in that the Democrats may furnish some horrible examples of social and political depravity and demoralization, which may inure to the benefit and advantage of the Republicans and give them the county at the grand election. Anyhow, it will give our local railroad from Battle Mountain a boom, even at half price, and help out future dividends.

Is it in the air, or why is it that so many people have recently died very suddenly and unexpectedly, and from apoplectic causes. Only a few weeks ago, D. B. Starratt, one of our leading business men, and a most exemplary citizen in every respect, was thus stricken and in a few short hours was dead. John Booth met with a similar death, and now Alex. McKenzie, so well-known among the mining and social circles of the Comstock and the State, has suddenly stepped out into the mythical realms of the eternal, the lost and the irrecoverable. Speaking of John Booth's death, reminds one of a queer incident in his journalistic career, while running the Carson Register, in 1871, Hazlett, the well-known "Pilgrim," tramp printer, who has for many years traveled from office to office all over the United States, happened along one Friday, and, as usual, the poor, luny little chap was given a job at "distributing" type to earn his food. Being short-handed, Uncle John put him at work at a case next morning setting up reprint "copy." Knowing his liability to incorrectness, he told the Pilgrim to strictly "follow copy"—be sure and follow copy at all hazards. It was in the hottest part of the season, but the office being in the second story, with all the windows open, a fine draught of air was circulating through. Suddenly a strong gust of wind whirled in, and away went the piece of copy which Pilgrim was at work on out through a side window. He watched its disappearance, and, remembering his strict orders to "follow copy," made a headlong dash after it out of the window. His tumble was a fearful one, but he did not break his neck, and shortly afterward came limping up the stairs with his rescued copy in hand, looking hilariously triumphant although somewhat dilapidated.

Farmers beyond the borders of the local snow range, to the northward, are getting in their crops at a lively rate, and as soon as the snow will get out of the way the upper Reese River ranchers will resume work to that effect.

According to the papers, Governor Adams is reported to have sunk $20,000 in his Nye county mining operations. Who raised what he sunk, or who made what he lost? Some papers publish the item in a hilarious strain, yet Adams most probably sees nothing particularly funny in the proposition. He was reported last year to have made $20,000 in a good cattle speculation. Some fun in that, and if one offsets the other he comes out even.

The backbone of this chronic Winter has been broken at various periods of late, yet here is another to be broken. How many more backbones has it got?

Who said this was a dry moon? 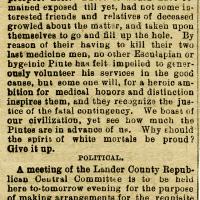