Again St. Patrick's Day is with us, and throughout the world the sons and daughters of the Green Isle will do honor to the memory of their good patron saint, who neutralized so much sin and evicted from the soil of old Ireland the meandering snake and the gymnastic frog. It is poetically recorded that "St. Patrick was a jintleman, and born av daycint payple," which brief biographical sketch is generally accepted as true. This anniversary day will not be publicly celebrated this time in Eastern Nevada, except by balls in the evening at various points, one of which—in Austin—will be given at International Hall, under the auspices of the Irish-American Benevolent Society, in first-class style, as usual. Yesterday looked more like a celebration day, so far as a parade of the military, with martial music, was concerned; but, alas ! it was on the occasion of two funerals. And it happened that they were of two old Reese River pioneers. The first was the

This took pace at 2 o'clock P. M. Our local military company volunteered to do escort duty, with their finely-uniformed band, and they did it in very soldier-like style. They escorted the remains from the family residence to the Episcopal Church, where the religious services to place, after which the funeral procession formed and proceeded down Main street to the cemetery, the band playing a dirge and the military marching with arms reversed. Lander Lodge No.8, of the Masonic fraternity, followed and the society of Reese River Pioneers; then came the hearse, with Masonic pall-bearers, followed by carriages containing members of the family and mourning friends of deceased, succeeded by the longest procession of citizens on foot that has been seen in Austin for many a day, several more carriages bringing up the rear. At the cemetery the burial services were conducted by the Masons according to their peculiarly beautiful and impressive ritual observances on such occasions. The weather had been temporarily sunny and pleasant during the march to the grave, but now, as the burial services were being concluded by the usual march of the Masons around the open grave of their deceased brother, singing as they cast their cypress offerings into it, a ponderous snow-cloud came slowly sweeping across Reese River Valley and along the ghostly snow-sheeted peaks of the Toiyabe range. The broad, heavy flakes came fleecing gently down as a silent tribute from the darkened heavens, covering the coffin with a thick, pure white blanked shroud, and as the large assemblage turned away, leaving the remains of Uncle John Booth reposing quietly in their narrow bed among those of numerous old friends and neighbors he has followed thither in times past, so, too, the snow-storm passed away.

Was that of Ralph Woodward. The services, held at the Catholic Church, were concluded as the procession returned from the cemetery, therefore directly the band came returning down Main street, escorting another long procession. Ralph Woodward was an old man of about the age of John Booth. He was a quiet, unassuming little man, and was elected Public Administrator, on the Democratic ticket, at the last election. He leaves no family or relatives here, and no enemies. For some time past he has been employed as a miner out at Yankee Blade, but his health and strength failing from a severe cold, which culminated in pneumonia, he was brought in from there last Tuesday, and died on Friday. The Society of Reese River Pioneers have dwindled down to a mere handful. A dozen more such drafts upon their ranks as that of yesterday would wipe them all out.

The latest and newest howling doctor, or medicine man, in the Piute camp, on the hillside south of town, having recently lost three cases, and been otherwise professionally unfortunate, they were obliged to kill him last Thursday evening. His predecessor was similarly unfortunate, so when they went down among the pine groves of Churchill county last Fall to gather nuts they took him along and killed him. This last doctor could out-howl any I have yet heard, and when he had a case of sickness his wild, unearthly shouts and howlings at the door of the campoody, in his frantic efforts to exorcise or drive away the evil spirit that was afflicting his patient, were as meritorious as they were inefficient. He stood in like a Christian bugler, and when tuned up to concert pitch, and sailing in on his merits, he could be heard all over town. His losing three patients in succession was considered ample and just cause for his judicious removal, although he never had any pay for his professional services, but it was also ascertained that he was a witch, from his having worked on sundry occasions for D. B. Starratt and John Booth, both of whom have died, thus proving him to be a deadly witch, and therefore all the worse for a responsible doctor. The legal patience and forbearance of the tribe was exhausted, consequently they held a council, and decided to kill him. So they deputized and instructed Big Bob to do the job. Bob visited him with an axe in the evening, while he was asleep, smashed his head, and after stripping the body, to save the clothes, they dragged it over back of the hill, made the job surer with a few rocks, and then threw the corpse into an old prospect hole, where it still remains. One of his numerous "brothers" got on the vendetta war-path next day, whetted up his tomahawk and scalping knife, and wanted Big Bob. But B. B. heard of it, and very judiciously vamoosed to some unknown locality where the sagebrush twineth more securely. This matter is not a legal subject for interference on the part of the white people, as it is a case coming under the head of "tribal relations." And tribal relations are therefore left to settle these disagreeable little tribulations among themselves. ALF. DOTEN. 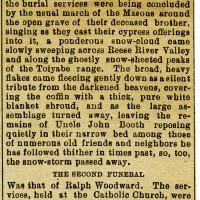