All local weather sharps agree in saying that March came in like a lamb, but it had been charging abut like a belligerent ram ever since—butt end foremost. Austin people are never happy without plenty of March weather—"wind and cloud and changing skies," etc. We read of people in Los Angeles and other effeminate localities gorging themselves on strawberries and all that sort of thing without any feelings of envy. We have plenty of such things—even ripe cherries, green peas and string beans, in cans, yet believe in a season for all things. It is no good eating strawberries the year round; they would become too common to be properly appreciated. Even ice is plenty enough now, but we prefer ice cream and iced punches in the Summer—not in March. Moreover, it is Lent, and all who can are disposed to resist the temptations of appetite, frown upon the great affluence of mortal sin, which smiles and allures us at every turn—wrestle with the devil, as it were, and practically realize what poor, frail, wicked creatures we are. Yet, after all, we feel that it is a comfort to know that

Live over in Nevada county, California. There, according to the local papers, the conventional footpad, with his cloth or pasteboard mask, infests the public roads, robbing indiscriminately, ranchers, charcoal men, and all who come along, taking even plugs of tobacco or second-hand toothpicks. Miners in any of the little one-horse quartz or drift mines, when payday comes, have no sort of show for getting home with their wages, and road agents are getting so numerous that they frequently waylay and rob each other in order to make business lively and turn an honest penny. Highwaymen used to do a good paying business on the old Comstock Divide until church fairs got too numerous in Gold Hill and Virginia.

All printers and newspaper men in this section have known Uncle John Booth, but personally they will know him no more, for very suddenly he has laid down his composing-stick and pencil, and gone to join the vast silent majority, out in the mythical beyond. He was the hardest-working newspaper man I ever saw, and his paper always showed good editorial and typographical work. Literally he was the hardest worked man in his own employ, driving himself more incessantly and unrestingly than anybody else. But such work wears heavily, even upon the most rugged constitution, and the final wear out was among the inevitable. For some weeks past he was not able to do half the work that he tried to force upon himself, and he frequently complained of being tired, and unable to get rested. Yet he felt driven to do all he could in his office, and to carefully oversee all the details of his business. Thriftily he made money, and liberally he spent it, for the benefit of his family and himself; yet he had accumulated some little worldly wealth, and looked forward to future enjoyment thereof; latterly, however, moments of depression have clouded his spirits occasionally, and symptoms of breaking down have become more and more apparent. Evening before last, however, he was about town, and his friends all noticed that he seemed to be in an unusually pleasant and genial mood. He went home to his residence before 9 o'clock, and seemed very happy in the society of his family, yet complained sadly of being "tireder than ever before in his life." About an hour afterward he went to bed for the night. Half an hour later his wife was suddenly aroused by violent struggles on his part, accompanied by gasping and rattling of the throat. She sprang out and struck a light, and summoned the assistance of their son, Ed., sleeping in the next room. The old man was writhing about, foaming at the mouth, in an evident attack of apoplexy, perfectly speechless, and directly he subsided into a quiet degree of insensibility, only opening his eyes for a moment when L. W. Getchell, his son-in-law, came in and spoke to him, and then closed them forever. Ample surgical aid was summoned, but he was past all human aid. He lay insensible, with his whole body paralyzed all that night and the next day, the only sign of life being his quick, labored breathing, until about 7 o'clock last evening when he quietly subsided into the long, dreamless sleep that knows no earthly waking.

Was born in York, England, March 16, 1818, consequently would have been sixty-six years old on Sunday next. He came to the United States in 1835, went to Cincinnati, Ohio, and shortly afterward to Louisville, Kentucky, and finally to Alton, Illinois. At the age of eighteen he went to Mobile, Alabama, and served a four-years' apprenticeship in a printing office. Subsequently he went to Georgetown, Ohio, where he was employed for some time in the office of the Political Examiner, a Whig paper. February 28, 1840, he married Miss Jane Price, his present widow, in Georgetown, and from 1840 to 1852 was engaged in general merchandizing. In 1853, with his wife and three children, he crossed the plains to California, arriving at Vallecito, Calaveras county, on the 10th of October. He kept a hotel, and had an orchard at or near there for a number of years. In 1874 he was engaged in freighting across the Sierra Nevada, to Virginia City, and subsequently to Ione, in this State. He came to Austin in that same year, and in the year following ran a four-horse coach between here and Ione, carrying passengers, mail and express. He quit the stage business in the latter part of 1865, and went to Virginia City, where he worked for three years as a printer in the Enterprise office. His family joined him there, from Vallecito, and went with him in August, 1868, to Bloomington, Illinois, where he published the Weekly Republican for a year, and then returned to Gold Hill, Nevada, being meantime rejoined by his family. In 1870 he was publisher and proprietor of the Silver State, Unionville, Humboldt county, Nevada; in '71 he ran the Carson Register; in '72 the Pioche Record, and in '73 bought out the interest of John H. Dennis in the Reese River Reveille, with Andrew Casamayou as partner. For three years they also owned the Belmont Courier, Booth personally running that paper. Upon the death of Casamayou in 1877, Mr. Booth traded with the widow of deceased, she taking the Courier and he the Reveille, also trading residences, and thus he removed permanently to Austin, where he has resided with his family ever since, conducting the Reveille with notable success, financially and otherwise. Eleven children were born to himself and wife, five of whom are still living—three sons and two daughters—M. P, Booth, at Tuscarora; W. W. Booth, Belleville; J. E. Booth, Austin; Mrs. Laura Wing, Reno, and Mrs. L. W. Getchell, Austin. J. E. (Ed) Booth, now working in the Reveille office, was recently editor of the Shoshone Rustler, Idaho, on the Oregon Short Line Railroad, fifty miles south of Hailey.

John Booth was among the most energetic and public-spirited of Austin's citizens. He was a Master Mason, belonging to the Lodge here, and President of the Society of Reese River Pioneers at the time of his death. Conscientious, and of strict integrity in all his business dealings, a kind husband, and most notably a true father and never-failing friend to all his children under all circumstances, he has gone to his just reward, and numerous warm friends will deeply regret his loss. A very varied and busy life has suddenly ended, and John Booth's funeral will take place on Sunday, the sixty-sixth anniversary of his birth. ALF. DOTEN. 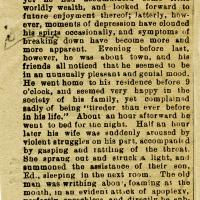