The morning air is heavy and unfragrant with the floating odors of coal oil fire-kindling, for in this desperately cold weather the thrifty, scantily-dressed housewife, as she starts the domestic fire, eagerly desires to make a sure thing of it as fast as possible. Coal oil only costs six bits a gallon here, and a gallon will start several fires. In fact, we all remember when even a bottle full, judiciously applied, has started a fire destroying a goodly section of Virginia City, or made insurance policies available in Gold Hill. During the last two or three years we haven't had a fire worth mentioning in Austin, and the insurance companies have a soft, lucrative thing of it. This is doubtless owing to the known alertness and efficiency of our Fire Department. Yes, and now it is proposed to buy a lot of Harkness' Fire Extinguishers and distribute them in convenient localities all along Main street. Just imagine a lamp explosion in a toy shop, and forty-seven active citizens rushing madly in, each with a sort of soda fountain or mammoth syringe on his back, and playing forty-seven streams upon the flames, or upon each other, the interest of the occasion still further heightened by the sudden arrival of the Fire Department with big hose nozzles and deluges of water from numerous hydrants. Many a big conflagration has been prevented by the timely arrival and well directed potency of a Babcock fire extinguisher, and the Harkness is said to be even more effective. A gallon of prevention is better than a whole reservoir of cure, sometimes. Mr. Delosse, agent of the Harkness, who is here introducing them, gave a public test day before yesterday which was very satisfactory, and our gallant fire ladies kindly refrained from drowning him with water from their machines, same as was done with Murdock, agent for the Babcock, when he gave a big public test in Virginia City several years ago, with the old volunteer department on hand ready to guard against any possible danger from the fire getting away. Anyhow, whether needed or not, several Harknesses will be disposed of here, and Delosse will be at a loss to explain where de loss comes in, so far as he is concerned.

Are disagreeably prevalent, and many a cuss word is directed at obstinate faucets which unexpectedly refuse to give down. Water seekers rush desperately from house to house, with pails and pitchers, and all whose water pipes are sick send for McGinnis at once. He is kept at work day and night. Joe McGinnis is as much of a public character in that line as "Water Mac" used to be in Gold Hill and Virginia. Down in Reese River Valley, at Battle Mountain and all along the line of the Central Pacific the thermometer during the recent cold snap got away down among the lower zeros, from thirty to fifty degrees, the latter figure being reached at Elko. Austin's coldest was about ten degrees below zero, in the shade. Such cold nights make a fellow wish he was a Mormon.

The famous lawsuit of Harris vs. Harris, clothing dealers, etc., here and in San Francisco, came up again in the District Court, before Judge McKenney, last week. It is a sort of diamond cut diamond arrangement, with intervening and side suits to assist in mixing things up most perplexingly, and the numerous lawyers employed are all getting fat. Our local lawyers are all into the suit, and when the legal brigade from San Francisco, Sacramento and elsewhere came in and joined forces, last week, Austin was right lively and the saloons and restaurants did fine business. The lawyers are all provident enough to draw adequate fees at each trial phase of the case, and adjourn or postpone it as often as they can. So, last week they just got fired up right, and people thought there would be a two or three weeks' session of the case, when it was suddenly blocked by adjournment till May. Then it is proposed to commence anew, changing shifts so far as Judge is concerned. Four fresh Judges are given to select from, and by judicious changes, from time to time, the Harris vs. Harris case may be kept for an indefinite length of time in chancery, so to speak, like the famous suit of Jarndyce vs. Jarndyce, mentioned in Dickens' works.

Was very much celebrated yesterday, and Postmaster Gibson was driven wild with extra work, handling all sorts and sizes of valentines, many of them as big as barn windows. But the easily folded, more hideous and popular kind predominated. Most everybody received a valentine of some sort; but those who expected, and didn't receive, just went and bought the roughest they could find and directed them themselves to themselves. And these were the most proudly hilarious in showing to admiring friends their valentudinous acquisitions. Business men and respectable citizens were not exempt from severe valentine inflictions and atrocities. Jack Lisle, the restaurant man, got five horrible things, so diabolically reflecting upon his manner of feeding his patrons, his personal appearance and general character, that he miserably walked off down to the cemetery and wanted to die. Then there was a sedate, professional man, who got his keenest sensibilities dreadfully harrowed up by a huge picture of a cat—sent all the way from Reno—a fierce old tom cat, viciously gazing at the moon from a house-top, and gently caroling: "Hinc illae lachrymae." He regards it as the ghost of a bad cat which he caused to die not long ago, and feels retributively unhappy. The festivities of the day wound up last night with a grand valentine party at International Hall.

The mines here are turning out a goodly amount of extra good ore about now. It is of very high grade, some assaying up into the thousands per ton, and coming, as it does, from the lower levels of the Manhattan Company's mines, it shows very conclusively that the ore does not deteriorate, either in quality or quantity, as greater depth is attained, but quite the contract. This ruby silver ore from the condensed narrow ledges peculiar to this locality is the most beautiful silver ore in the world, and its honest richness is properly attested to by the almost daily shipments of ten bricks, worth over $1,000 Hinc illae brix.

Notwithstanding the total suspension of the entire free list on the Nevada Central, between here and Battle Mountain, the receipts of the road have not fallen off to any appreciable extent, and the annual dividends to stockholders will not be interrupted. That gallant little narrow-gauge has become a prime necessary of life to this community. All the trains rush to and fro on time, regardless of the weather, and snow never cuts off the communication as on the great Central Pacific. The track is always kept clear and open by the millions of cattle in the valley tramping down the snow as they use the track for a convenient thoroughfare in passing through the sagebrush.

During the coldest of the recent cold snap, Stillwater Thompson, Captain Bob and other Piute chiefs had to wear as high as seven linen dusters in order to keep warm, and the squaws all wound barley sacks around their feet and ankles, and away up till they waddled badly, and their tracks in the cold snow were precisely like unto those famous prehistoric tracks in the State Prison quarry near Carson.

The Skating rink on Main Street has been made a glorious success by the cold weather, and its proprietors have become so wealthy that they have changed their names to Vanderbilt and Gould.

A lodge, wigwam or branch of the Young Men's Christian, etc., has been organized here, with a very flourishing membership and outlook. These juvenile Christians will not allow themselves to skate, drink, fish or fiddle on Sundays hereafter, but will attend more to mutual improvement and to the acquiring of further facilities in that line, extending the same to all who desire to join. It is a real good idea.

"Quijotoa." We have all read ever so much about it and its splendid bonanza prospects, but can't somebody tell the correct pronunciation of the word? Its derivation, definition, etymology, topography and all that sort of thing have been well ventilated, but won't somebody tell what syllable or syllables the accent comes upon? Kee-ho-to-e will do for pronunciation; now where does the accent come in? 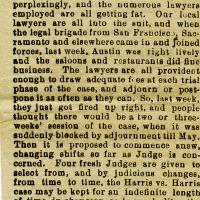