Perhaps it is just as wintry on the Comstock as it is in Austin. Anyhow, the temperature here is numerously variable, and it is no trick whatever for a nice, Spring-like day to wind up with a vicious zero freeze. As to that matter, the average Austin thermometer slides up or down the scale as if it were greased. A fellow finds his ears and mustache freezing from no apparent cause, and on looking at the thermometer finds it away down among the lower zeros. Then he for the first time realized that it is cold. But the greatest difficulty that the skating rink projectors heretofore mentioned, on Main street, have to contend with, is the porousness of the soil. They poured on the water, and plenty of it, but the porous soil took it in like a sponge. A cold snap caught some of the water before it could soak away, and since then, by frequently and judiciously irrigating the surface of the ice, they have at last succeeded in forming a pretty good rink upon which skaters may amuse themselves with perfect safety, knowing that if they could break through, they would be in no danger from drowning, but more from suffocation with dust.

Speaking ice, Joaquin Patargo, who cuts up Reese river every Winter, and hauls it to town for Summer use, complains that he has not been able to get over two feet in thickness of ice thus far this season. Last Winter it froze five feet deep, or away down into the mud, compelling the catfish to burrow deeper for safety. This depth of water or thickness of ice can, of course, only be secured by damming the river. This he did this season in good time, therefore has it all secured, and will finally bring it to town, leaving the catfish to depend upon the Spring thaw from the headwaters for desired irrigation. Reese river catfish, however, although you may dig them up like potatoes, don't seem to mind it so long as there is any moisture at all in the soil, but are willing to wait till water comes. Mr. Dadd gives me these facts in piscatorial experience, corroborated and verified by Joaquin himself. They are both prominent members of the Society of Reese River Pioneers, consequently can be depended upon as perfectly reliable. And I have noticed myself that the genuine Reese river catfish have snouts or noses like hogs, made especially for rooting or burrowing in dry weather, and also have a pouch in each cheek, like a gopher.

Has become stale in the estimation of Austinites. It has an extremely insignificant look, and is evidently a two bits a bushel affair, and as for any extra merit claimed for it on account of having two tails, that's nothing. Four tails and an extra set of legs would not add any dignity to its pusillanimous appearance. It comes in with the grand red sunsets, and can best be seen as the sunsets fade away into nightly darkness, yet it is apparently too insignificant and not influential enough to produce these famous and truly remarkable sunsets. It will be observed that this glowingly redolent phenomenon still continues, regardless of all theories. It is simply a peculiarity of the season. Only this, and nothing more.

Fannie Schuyler, one of the demi-monde, died of pneumonia last Friday. She was about thirty-six years of age, as near as she could remember, and was formerly well known in your city in the flush times. Many will recollect her as a very pretty woman, with a neat, doll-like complexion and appearance, but whisky, opium and general dissipation destroyed her beauty and made her a wreck. She came to Austin immediately after the great fire of October 26, 1875, and here remained, continuing her downward career. She was quiet and inoffensive and evidently her own worst enemy. Her funeral was quite largely attended by people of her own class and others, and she received decent burial in the public cemetery below town. In accordance with her request no minster officiated. An ancient colored woman, known as "Old Car'line," read a hymn; there was some singing, and the hearse was followed by a large hack, three buggies, one omnibus, two grocery wagons and a butcher cart, containing those attending the funeral. Her real name was Margaret Ann Dumarsh; she was of Canadian parentage, and a native of Watertown, New York. Whatever may have been the primary inducing causes of her downward career in life were best known to herself, but it may be a consolation to the poor creature's relatives to know that she received proper care at the final ending and decent burial.

Owing to the tendency of our young Austin boys to gravitate toward hoodlumism and get into bad company and follow bad habits after dark, the Board of Commissioners concluded to make them go home at night and not run the streets any more. A town ordinance was accordingly passed to that effect, and now form the tower of the hall of Eagle Engine company, No. 3, rings aloud the curfew bill every evening, at 8 o'clock, giving just eight taps as a warning for the boys to vanish homeward or be arrested. The boys tumbled to the racket forthwith, not willingly but judiciously, knowing that the entire police force stood ready and watching to gobble them up unless they could show authoritative permission from parents or guardians, or that they were on errands, or in the discharge of some legitimate duty. At all public entertainments heretofore, especially theatrical, etc., these boys have been a very serious source of annoyance to both performers and audience, crowding the back seats and entry and driving decent people wild with their yells, shrieks, whistling and stamping. It had to be stopped. This ordinance is a most excellent one, operates well, and other towns and cities besides Austin might adopt the same plan to very good advantage.

The importance of the coming political campaign is very well appreciated, but the political pot does not boil very fiercely as yet; in fact, it is hardly time. The shrewdest question on the political docket for consideration is, Who is to succeed Jones as United States Senator from Nevada. The chances are that he will be a candidate to succeed himself, in view of which proposition those who do not like Jones are trying hard to study up some man to beat him. This point is not easily decided, with the material at hand, but some kind of a Joshua may come in to the rescue between now and November. We shall see.

Harry Bluett, formerly well known among the miners of the Comstock, but for the last few years an active worker in the subterranean operations of Austin, left here yesterday morning for Butte, Montana. He proposes prospecting that section of the country for a few months but will of course return, unless he can do better there than here. He struck a good pitch or so in these mines last year, and paid a visit to his relatives and friends in England. He also got married, and was going to take his wife on a prospecting expedition to Mexico, but the prevalence of yellow fever there prevented, so he left his wife in the cold country and came back. But he has sent for her, and expects to meet her here in the sweet by and by, when he, too, like scores of others who have tried it, shall have come to the conclusion that Montana, with her nickel-souled population from the East, is no profitable or congenial community for an old Comstock Nevadan. Anyhow, Harry is a very popular gentleman, with lots of friends to wish him the best of luck.

Old Joe was drunk again last evening, and, as usual, waxed sentimental. He held up a telegraph pole on the street corner and gazed fondly and reverentially upon the red sunset and the comet, and especially upon Venus, thus rapturously soliloquizing as he gazed: "Dear gor-blessed old Veny, night after night I've watched you patiently transitin' arosser face of the sun, yet other folks failin' ter reckernize yer. But old Joe recks'nize yer, betcher ribs, old gal. Won't throw off on yer for no damn snide of a two-tail comet, either. But, sh-h-h! here comes Mrs. B., a-huntin for me. Good-bye, old Veny, gorbless yer. Adios." Right here his home regulator seized him gently by the collar and elbow and dragged him off up a side street.

The clouds have rolled by, and the weather is milder, sunshiny and genial. 'Tis well. ALF. DOTEN. 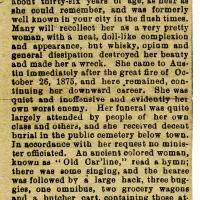