There was a man. It was not the first time there had been a man, but this man was more manish than other men of his day and generation. His name was Horton, and he hailed from Baltimore. I first knew him as a California gold miner, working on Woods' creek, a tributary of the Tuolumne, in the Winter of '49. He was a dark complexion, full bearded six-footer, strong as a young giant, with a peculiar massiveness of countenance, and general style of character naturally attracting the attention of most any one who saw him. He was a hard worker and always had plenty of money, spent it freely, but never seemed contented to work long in any one place. In fact he seemed to be naturally a prospector, and found more new and rich spots to work in than anybody. Two years afterward I met him at Hart's Bar on the Calaveras, still delving away with pick, shovel and cradle, and still working spending plenty of money. He left shortly afterward, and I did not see him again till August 27, 1855. It was at Volcano, Amador county. There had been a Democratic mass meeting that evening, and Governor John Bigler, Colonel J. C, Zabriskie and James Farley had addressed the citizens from a stand on the main street. Suddenly there was a row in a saloon, and I saw a light-built fellow trying to defend himself against two burly rascals who were attacking him most viciously. No weapons were used, but the young man struck out with his fists very lively. They had him backed up against the wall and were getting the best of him. Just then a stranger, riding on a mule, paused for a moment in front of the door, and the next instant he leaped to the ground, brushed past me, and directly formed a fourth party in the fight. He knocked the two big men right and left, had them both on the floor at a time, then stood over them, knocking them down every time they attempted to rise. The young fellow took the opportunity to slip out, and the stranger coolly marched up street, leading his mule to a stable. His floored antagonists seemed really thankful for a chance to arise, and philosophically wiped their bloody noses without evidently caring to follow up such a disagreeably vigorous acquaintance. But I followed him, though, for I had recognized Horton. He explained thus:

"You see, I've been down on James' Bar, below Mokelumne Hill, the last three months, and done first rate; but I got tired and concluded to try the Fiddletown diggings. I was a little late getting to this place and shall go on early in the morning; but, really, now, I did happen along in good time to interfere in a one-sided muss. Never was here before, but hope those two chaps down there won't think harder of me on that account."

He camped with me that night; we ate beans together, talked over old times, and before sunrise he was on his mule and his way to Fiddletown. I never saw or heard of him afterward until last Sunday, yet I recognized him at once by his strong, massive features and self-possessed manner. His dark hair had become considerably tray-mixed, and he did not walk up street with his old, independent swing. He was simply Horton, thirty years later. But he was the same hearty, whole-souled man as of yore.

"I've had lots of experience since then," said he, "and handled just as much money as I desired. Have been all up and down the coast, yet never have lacked good food and good clothes and a good place to sleep. Worked the last ten years around Nevada City and Grass Valley, and only been in this State six months. Got in last evening across the country from the Candelaria and Hawthorne section. Good mines over there, but I don't like their kind. Now I'm going on to Osceola to prospect those gold diggin's, and the chances are that next thing I shall get out of this cussed sagebrush range, and back again over in God's country. Don't you know, sometimes I think I'm getting old enough to quit prospecting, and that I'll settle down on a ranch and get me a wife. Must have somebody to leave my gold dust to when I go under the daisies. Adios, old pard; you're getting a little gray, too. Call over and see me in the sweet by and by, on my ranch, you know."

On his ranch! He'll never settle down on a ranch. Bless his grizzled beard and big heart, he is too inveterate an old prospector for that. He always seemed to me to be cut out for a very different style of man; a leader among men, socially, intellectually or politically, yet somehow he never took the lead, except as a pioneer and a prospector. Verily, "there's a divinity that shapes our ends," and the future history of this old timer will be interesting to study, for he can but follow out his manifest destiny, finish digging his grave, and tramp more and more wearily onward after the numerous old pioneers gone before him over the well-worn trail, out into the mythical beyond.

Writing about the aforesaid old California prospector, calls to mind the numerous old residents of Virginia and Gold Hill to be found everywhere throughout Eastern Nevada. When adversity descended, like a cold fog, upon the Comstock they had to seek homes and employment elsewhere, but your old-time Comstockers never forget what they remember, and longingly hope for a renewal of bonanza days, willing and ready to rush back to the hoped-for revival at short notice. And as they thus hopefully dream of better times, they gently hum: "Oh, carry me back to old Virginny." But most of them are too poor to get back there any other way.

The old Manhattan mill has just started on a fresh run, after a couple of weeks' rest for repairs and a thorough clean-up. A gratifying peculiarity with this institution, is that its bullion yield is chronically continuous, the regular shipments of bricks being made every other day, or oftener, whether the mill runs or not. In fact, some of the heaviest shipments have been made since the mill shut down. A thorough clean-up of this mill, literally means something, and something elaborately valuable. Crushing the ore by the Stedefeldt dry process involves the gradual accumulation of light, rich chloride dust everywhere, as well as in the regular dust chambers and other traps. The whole concern has to be scraped and swept from one end to the other, and the pans are thus kept working long after the batteries have ceased their noisy racket. Just what bricks have [been] turned out in the way of bullion shipments during these two weeks that the mill has shut down, would make any newspaper man feel remarkably rich, and financially comfortable.

Railroad between here and Battle Mountain, ninety-three miles, is a more profitable concern than it has been. This is not by reason of any reduction of freights and fares, but in the greater economy of management, running less trains, or only enough to fill the requirements, and in the total abolishment of the dead-head system. No free passes are allowed, even to the clergy, little children or officers of the road. The conductor is the only man allowed a free pass, which is obviously good policy in that respect. Moreover, it is to the benefit of the road, as well as to Austin, that impecunious scrubs cannot get here without putting up or walking. The other railroads in this State may be financially demoralized by the free pass, dead-head system, but not the Nevada Central.

Passed off very nicely here in Austin, and all the children, as well as many of the grown folks, received Christmas and New Year's presents in abundance, mail and railroad facilities bringing in many from outside, to say nothing of the affluent abundance to be found in the stores. The toy and fancy goods trade was better than it has been for years, and Wright, Sower and others in that line increased their personal wealth very materially. 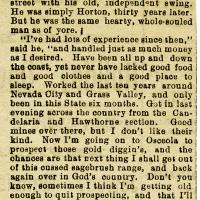