Day before yesterday a heavy, wet snowstorm washed, disinfected and purified the air of this section from all traces of forest smoke, volcanic ashes, dry fog and all that sort of thing, yet last evening there was that same roseate sunset display glowing along the southwestern heavens and glorifying the serrated tops of the sagebrush and mountain ranges, even more strangely than ever. It is both pleasing and scientifically interesting to hear or read the various theories advanced as to the cause of this beautiful phenomenon, yet none give a perfectly satisfactory explanation any more than they could successfully diagnose those rich, red Northern lights during the last midsummer nights. Perhaps there may be some connection between the two, or that, as come shrewd savant recently sets forth, the transit of Venus is ding the business, that famous planet having worn a totally changed appearance since her recent notable drag across the face of the sun. Perhaps it may be the advance glow from the headlight of the new comet, now so rapidly approaching the earth. Stillwater Thompson, who is as shrewd and close an observer of heavenly phenomenon as any other Piute in this section, puts the whole thing in a pine-nut shell, as follows: “No sarby.”

The recent red-hot contest for the control of Ophir is more easily explained and understood, and many a shrewd, small outside manipulator of mining stocks hopefully predicts a red-hot boom in the market before many months, resulting from the uncovering of sundry rich ore bodies mythically situated in the lower levels of Ophir, the revelation of which has been interestedly deferred. Perhaps Coll Dean might now appropriately step to the front with some definite statement in that line. Bonanza revelations are always in order. But in Ophir, of late years, they have always proven too stringy for any practical satisfaction. All these little circumstances, however, help out the stock market and assist in equalizing the distribution or concentration of money. Anyhow, it makes coin change hands, which is always gratifying to the general public.

In this connection it is quite interesting to note the movements of the famous bonanza kings, Mackay and Fair. They, as well as Flood, lovingly and lingeringly desire to hold on to the north end of the Comstock—the grand subterranean spring from whence they drew their overflowing, immense wealth, yet Flood seems to cling to the old groove more tenaciously than his other companions in Fortune’s smiles. Fair branched ambitiously and easily off into politics, seeking some indefinite degree of renown or notability in that direction, and now John Mackay, after quite a rambling vacation in Europe and America, or in frequent transit across the Atlantic between the two localities, suddenly and ambitiously steps out on top as a grand manipulator of telegraphic communication—a sort of Jupiter Tonans, as it were, to sling the wired lightning across mountain and plain and beneath the ocean, east and west, and other eligible points of the compass. He is actively and literally laying his wires to become the most popular of the three, as well as the richest—or the poorest—man in America. Fair emulously follows suit in the matter of public enterprise, but his old mining proclivities carry his aspirations in a subterranean direction after public approval. He desires to do his State service in the mater of striking more water where it is most needed, and has introduced a bill, in his Senatorial capacity, to promote the boring of artesian wells on Government lands in Nevada. Kendall and Cassidy bored a little on the same lead in times past, but they never struck water. Now if our genial and financially potent Uncle James will only succeed in tapping the basins of our sunken rivers, make Nevada’s mountain streams reappear above the alkali, and cause our deserts to blossom as the rose, all hands will rise right up in their boots and call him blessed. The movements of Mackay in lightning, and Fair in water will be regarded hereafter with more interest than even the most gorgeous sunsets.

The third-class Postmasters of the Pacific Coast received a particularly rough stroke in the recent general reduction of salaries. It costs more to live, especially in Nevada and other interior sections, than it does in the East, therefore many a poor devil of a Postmaster stands shivering and undecided whether to continue honestly serving Uncle Sam, or starvation wages, or to throw up the sponge and go to robbing the stages for a living. Here, in Austin, the Postmaster has been particularly and peculiarly unfortunate. The disastrous cloudburst and flood of August, 1874, swept away the Postoffice entirely, fixtures and all, and it was only by the liveliest and most indomitable exertions that the mails were saved. Again, by the big fire in September, 1881, was the Austin Postoffice totally obliterated. On both occasions the mails alone were saved, and at the expense of the office fixtures, boxes and all similar necessary public conveniences, which, under the laws of the Department, have to be furnished and maintained by Postmasters themselves. This unfortunate Postmaster has applied to the Department for adequate reimbursement or relief in the matter, and may be properly heard and responded to, if he should live long enough, but red tape official justice is slow, very slow, even in America.

The Manhattan mill, in this place, is one of the most persistent old ore smashers in the country. It does all the ore reduction, and bullion production of this district and vicinity, and, as stated in a previous letter, its present run, commencing October 28, over a year ago, has been continuous ever since with the exception of a few days’ pause for absolutely necessary repairs. The chances are that it will have to stop before long for a thorough overhauling and preparation for another long run. But it will not stop for lack of ore, for there is plenty on top, plenty in sight, plenty in reserve and plenty in prospective, and rich ore at that. These mines are exceedingly well managed, and judiciously worked with an eye both to the present and future supply, and steadily continuous, profitable output. This fact is significantly attested to by the regular, unfailing shipment of silver bricks every day or two, assaying over $1,000 apiece.

Ducks and geese are plenty, and tolerably cheap, the Piutes are bringing them in from the Humboldt, as well as from eligible neighboring localities. But they stick to good prices and will not sell a duck for two bits unless he is stale or otherwise unprofitable.

A sad accident occurred last Sunday when a little ten-year-old boy, picking into the merits of an innocent-looking giant powder cap or exploder which his still smaller brother had found, had his left hand blown off and was otherwise so badly injured that he died next morning. The moral to this is too obvious and frequent, yet naturally to be continued.

George H. Morrison, of your section, engaged in collecting data and material for Bancroft’s History of Nevada, was here the other night, arriving by private conveyance overland from Carson, and left next morning for Ruby Valley, Eureka and otherwheres in the eastern part of the State. He proposed returning here in a few days to stop awhile. George is a popular gentleman and has many friends here.

John Booth, of the Reveille, is getting rich some more. He has the model newspaper of this section, filling the wants of the community in that respect, consequently he is deservedly doing an excellent business. The old Reveille show for itself.

Politics is a subject which is laid over for the holidays, like the adjournment of Congress for that purpose. But Austin is sure to join with the rest of Eastern Nevada in the grand turmoil and trouble of the coming political campaign of next year, and nobody need forget it.

Somebody has located a skating rink on Main Street, on a vacant lot just opposite the Court-house. But he has got it on the wrong side of the street. The soil is too porous, and there is too much sunshine; on the other side the shade of the hills and natural coldness would furnish ice three feet thick for about seven months in the year, and ice cream for the other five months.

The most popular amusement among the young Piutes is sliding downhill on a barrel stave, standing on one leg. 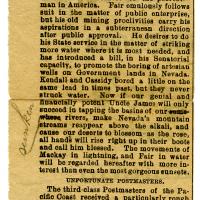