To-day being the holy Sabbath, the people of Austin are undergoing their usual observance and appreciation thereof. The stores, bank, express and Postoffices are closed, the saloons are all open and the churches well attended. Austin likes to go to church, especially when the weather is fine, as it is to-day, and he or she always feels better for it, regardless as to what the preacher may say, for [then] it is that each has a square look and intimate considerate inspection of the other from various worldly points of view. And the regular gossips meet and compare notes on the way home, and get a fresh start on the entire week's gossip, or until they meet again. The singing in all three of the churches is excellent and attractive, and the clergy do their part in the way of religious instruction. When there are any sort of outside attractions, however, such as a military or a musical turnout, a target or pigeon shooting, or a baseball game, good sleighing, etc., Austinites do not quite all go to church.

George H. Mullen, an old pioneer of California and Nevada, died about 12 o'clock last night, and was buried this afternoon. Mullen was a native of Maine, about fifty years of age, and came to California in 1850. He followed mining, and the silver discoveries attracted him over the Sierra to Nevada, arriving in Austin in 1963, over twenty years ago. He had a wife, a son and daughter; but the wife died some twelve years ago. The children grew to maturity, and the daughter married in the Golden State, and the son is here in Austin. Mullen was always an enterprising, hard working miner, sanguine and hopeful, and though not always successful, he managed to pick up considerable money. Moreover, he knew how to save it pretty well. He had no bad habits, was ignorant of the taste of alcoholic beverages, and did not know whisky toddy from small beer. He held on to a half-dollar as vigorously as others would upon a $20 piece, denying himself the luxuries of life, and almost going without sufficient clothes to wear. He used to have money buried, and, so far as he could be, was his own banker, always, evidently, fondly dreaming of some day in the sunny future when he could call himself a rich man, and branch out and enjoy himself as such. A year or so ago he got into difficulty with the Manhattan Mining Company about some ore which was in his possession, and a suit by him against that company, for several thousand dollars in the United States Circuit Court, at Carson, is the present outcome of the matter. How it will terminate, under the present circumstances, remains to be seen, of course. He went to Reno a few days ago to consult his lawyer, and contracted a severe cold, which resulted rapidly in pneumonia and death. His very abstemious life had not rendered his constitution proof against that only sickness of his life, and his last hours were a painful, desperate struggle for breath. He was reported to have a large amount of money buried somewhere, and yesterday morning his physician told him to arrange his worldly affairs, for he was very likely to die in a few hours; that if he had any information to divulge to some trusted friend as to his money and property he had better do so forthwith. But Mullen was resolute, and clung fast to the secret of his bosom, saying he would do that by and by, or to-morrow would be time enough. Before noon, however, his brain was deranged, and so remained till he died, he not being even able to recognize his best friends.

And now the most exciting of popular talk and consideration is: Where is Mullen's money buried? All remember that when he was arrested, over a year ago, at the time of his difficulty with the Manhattan Company, he had money buried beneath the floor of his cabin, which was brought to light with the assistance of the Sheriff, and the popular idea is that he has pots and cans full of golden twenties, and bars of silver buried in some very shrewdly-selected locality. Some who pretend to know stoutly assert that there must be over $40,000 of it. Could the locality of this very desirable treasure trove be known how eagerly half of Austin would be digging for it. How provoking that Mullen should thus carry his great secret to the grave with him. His little cabin is carefully watched, however, under the care of his relatives and interested friends, and proper explorations well be promptly made. The chances are, however, that his money is not buried there this time. He was a man who closely guarded his own financial secrets, and had no personal confidant in that respect, consequently everybody is in a perplexing state of doubt. He had some money banked in San Francisco, also some money coming to him from the firm to whom he has been shipping ores in that city, but perhaps his savings and money account has been overrated. Perhaps he left no money buried at all. But hundreds who knew him well stoutly assert their belief that he did, and whether he did or did not, both open and secret search will be made in years to come for Mullen's buried treasure. It is the old Captain Kidd and Cocos Islands stories on a small scale at present, but as the years advance it will grow larger and expand into hundreds of thousands. But the great moral in all this consists in the fact that Mullen was not ready to die. Never having been sick before, he saw no reason for giving up life, and his precious, carefully kept secrets, therefore clung eagerly to all till the last, refusing to even consider the death proposition. What a fine subject for a sermon.

Last Sunday we had a way up Chinese funeral by way of variety. Ah Cheow, a man of prominence in the celestial circles of Austin, was the subject. He had been a resident here for several years, principally following the business of restaurant cook, etc., and was reputed to have accumulated a few thousands in ready coin. Anyhow the Chinese had quite a time over his remains. They put the body in a fine American casket and kept it three days till Sunday. It was a cloudy day, inclined to be stormy, and snow already covered the ground. In an open space between the houses in the Chinese quarter they had four tables. On one was the coffin; next came one with a cooked chicken, little dishes of rice, liquids of some kind in open dishes, and a lot of candles and rush lights burning. The third table was spread with apples and other fruits and sweetmeats, and the fourth was occupied by a large roasted hog, cooked whole and spread out with his back upward. Some queer looking sausage garnished the outfit, and flags and banners were interspersed. There were also two bands of music present—one a regular brass band from down town, which was hired for $50 to lead off the funeral in good Melican style, and the other was the Chinese band of gong, drum, cymbals, etc. These bands alternated and strongly contrasted in the playing, and drew large crowds of men, women and children, Indians, etc., from all quarters. Soon the plumed hearse and carriages arrived, and about 2 o'clock P.M. the funeral procession started, passing through the principal streets. A Chinaman on horseback, with a red and white sash, acted as chief marshal, and a sort of lieutenant, also mounted and sashed, brought up the rear. The brass band on foot, at the head of the procession, played lively airs, and all marched at rather a quick step. The hearse, with pall-bearers, followed the band, and then came a hack and an omnibus containing Chinese women and the Celestial band, which kept up a steady din in passing through the streets, regardless of time, tune or anything else but noise. One little Chinaman walked behind the hearse, bearing three slim punk candles, to be burned on the grave, and about fifty Chinamen on foot followed the carriages. Ah Cheow was a Chinese Free Mason, hence this unusual turnout and display. The big dragon flag and streamers floated from the flagstaff of their little Masonic Temple, various flags and banners were borne in the procession, appropriately Inscribed with Chinese characters and each of the Chinamen following the carriages, two and two, carried small flags, more or less in number, according to the degrees in their Masonry they had attained. Crowds of people lined the sidewalks, to the utter desertion of the churches, and although larger processions of the same kind are common enough in San Francisco, yet none could outdo this in genuine Celestial-American style and novelty. At the cemetery below town, where the Chinese have a little heathen corner to themselves, they had more music by both bands, a weak-voiced Mongolian sang a plaintively unmusical song, extolling the virtues of deceased and bidding him an eternal farewell, and after the candle-burning and other ceremonies were arranged, a good sized pork roast, the chicken and a few other provisions and sweetmeats were spread out for the benefit of the departed, but speedily [consumed] by sundry watchful Piutes and Shoshones as soon as the mourners had left the coast clear. The deceased had on his best clothes, hat, shoes and all, and also had small sums of Chinese money in each hand and in his mouth, therefore was supposed to have a good start, so to speak, for the next world. Being among the other interested observers before the procession started, I asked one intelligent looking Chinaman standing near the corpse:

"Why you no shut him eyes?"

"Yes, but you should put pieces of money on them."

"That' so; but Ah Cheow had lots of money, didn't he, thousands of dollars; what's to be done with it?"

"No; he no money, he poor; he no gottee dam cent; but he Flee Mason, you see, De udder Masons put up plenty money to give him good funeral, you see. He no Flee Mason one cart nuff to take him 'long down. The Masons purty god for him, you see."

The late election news from the East naturally interests us all considerably, and Republicans feel rather jubilant over the general result, and especially over the general result, and especially over the rather amusing set-back Ben Butler got in Massachusetts. Old Ben has shown himself so anxious to ride into office regardless and unscrupulous as to what sort of, or how many political horses he used for the purpose, that to see him made to take a back seat altogether would be gratifying to his numerous political opponents. Local and State politics, although rather quiet again at present, will revive and become rampant before long, and keep stirred up spasmodically until the campaign is properly started.

About this time our ladies are getting out in their best Winter rig and style, with new hats and other things to match. People like to dress well here, if they don't make a cent or pay their bills.

Coasting down the shady hillsides where the unmelted snow affords an opportunity is a favorite amusement with the Piute squaws as well as juvenile white Austinites. They use sleds, barrel staves, bits of tin, or just go it anyhow—and have lots of fun. ALF. DOTEN. 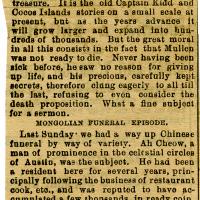