In my last letter, I wrote that houses are plenty in Austin, but they are all occupied, and the intelligent printer made "they are not occupied." He must be killed. Every house, little or big, is occupied to its fullest extent, even to dugouts in the hillsides, and more are being built by a few enterprising individuals who have faith, or who have to build or stay out of doors. A singular feature in Austin architecture consists in the almost total absence of any up-stairs accommodations. The usual residence is a low-roofed, very much spread out affair, with additional rooms built on as the family situation, or increase, may demand; but though the roof may cover half an acre, it never seems to occur to the builder thereof that it costs no more to roof two or three stories than one. The space between the rafters is rarely utilized by an upper floor. There is not a dozen two story houses in the place. If we were a little nearer the Comstock we might utilize a few dozen of your vacant houses by transferring them to Austin, but railroad transportation is too costly—about five cents a pound.

The recent decision of the United States Supreme Court, declaring the Civil Rights Act unconstitutional, is the most important dispatch which has come over the wires since the Garfield assassination episode. The Reveille had it in full, but did not seem to appreciate it; anyhow it got off a chronic growl, speaking of it as "a great, dry report of a Supreme Court decision," and expressing its preference for something about the coal miners' strike in Pennsylvania, or something of that sort. The Reveille should publish the telegrams as received, without comments. Yet fresh telegrams cost money, and the Reveille has the latest and best. The people of Austin should appreciate this fact, and liberally support their local paper. "Money makes the mare go," and coin pays for telegrams. Readers of the latest and best telegrams from all parts of the world should be willing to pay for them.

It is a very appreciable fact that most of the people of Nevada are glad that General Connor's son failed to pass examination for the cadetship from this State. That he was an inch too short in stature is assigned as the reason of his failure, yet his father is an old experienced military man, and most assuredly should have been conversant with all the requirements and not subject the boy to such a detrimental failure. There has been too much favoritism in this matter shown in times past. Young men who were really not competent, either mentally or physically, have been pushed forward for the position, with the hope of their parents and personal friends that they would pass and after months of careful "coaching" they have been sent on to Washington, there to undergo the impartial, rigid examination exposing their bed-rock, so to speak, and sent home unhappy. For the credit of Nevada it is to be hoped that no more experimental favoritism may be used hereafter in this very important matter. We have a smart boy or two in Austin, other localities in the State can say the same, and we know there are quite a number of young men on the Comstock eligible for the position. The only straightforward, politic and correct way is to let them all have a chance in a competitive preliminary examination and thus send our smartest and best boys. If they fail then it will be our fault and not so much theirs. The failure of young Connor leaves the position open to competition, so says Congressman Cassidy, therefore let our best boy go in and win.

The Reveille still persists in trying to victimize Daggett, and sacrificingly cremate him on the Senatorial altar. Bah! From the poop deck of the gallant ship with his fair bride on board, the festive and happy Daggett looks back over the stern, places his right thumb in side contact with his nose, and significantly twiddles his fingers Nevadawards as he gently remarks: "No, you don't; not for Rollin. A rolling stone gathers no moss in the political field, and I'm just rollin' over the seas to my Hawaiian campoody, beneath the wild banana tree, where the voracious politicians cease from troubling and the weary candidate finds rest. Ta, ta! call me not back. As the Dutch girl said 'I's been fooled dat way before!' " Hon M. J. Farrell, or some other equally competent gentleman from Eastern Nevada, would fill the bill for Congressman, but where is the man to succeed Jones as Senator? Sharon does not care to try it again and Mackay is no political aspirant. Most of the prominent men of the western part of the State have left for California and other eligible localities, and Jones seems left to try and be his own successor, if he desires so to do. If being a poor man is any qualification, Jones is all right in that respect. When he was in bonanza he scattered his millions loose among the people, and now he doubtless wishes some of it back for present necessities. But Jones has not signified his wish to be considered in the Senatorial field again, and perhaps would rather let somebody else have the honor. In which case who is the coming man? Not Daggett, for he has gone, and does not wish to come some more, at least not for that proposition.

All over the State the surface workings of the discovered mines seem to be pretty well worked out, yet this can hardly be said of the mines of Austin. They are not so deep by over 2,000 feet as yours of the Comstock, mere surface scratching in comparison, yet they are at the present time looking just as well as ever, to say the least, and bid fair to hold out the same to an indefinite depth. Perhaps they may improve, and eventually the small, rich "razor blade" veins lead to that mythical "mother lode" which has always been predictively gazed at in the dreams of the old Reese River pioneers. This, however, is simply a matter for future reference. But at present we of Eastern Nevada are all interestedly and hopefully watching Comstock propositions, for it is an established principle in the Nevada mining lexicon that the fortunes or misfortunes of the Comstock very influentially affect the entire State. It is pleasant to us to learn that John Mackay is standing in, and in fact and reality back from Paris and meandering through the lower levels, in his sweaty gray woolen shirt as of old, before he was rich enough to build a national telegraph or financially help out all his old friends. It is pleasant to read that he is pleased with the present prospects developed in those lower levels and believes in rich future possibilities at still greater depths, and it is a source of encouragement that he, Fair, Sharon and others of the old mining chiefs do not abandon the old Comstock by any means, but are still expending their hundreds of thousands in the development of its future possibilities. Perhaps it is the presence of John Mackay in the State that is making the mines of Eureka and elsewhere in this section look better. Anyhow, we are all pleased to know that he is in his native sagebrush, so to speak, and comfortingly near us. The suit of Thomas Kehoe against Thomas Breen was concluded in the district Court here on Tuesday. Kehoe worked for years with Breen, and is, in fact, said to have been the discoverer of the mine, which is two or three miles northerly from here, in the edge of Reese River Valley. They made a good living from the occasional ore crushings, dividing equally; but when Breen sold out the mine a few months ago for $20,000 he neglected to recognize Kehoe as partner and entitled to half. He also refused Kehoe's offer to settle for $2,000, and the jury decides that he must come to an equal divvy of $10,000. So much for trying to hog the whole. It is said Breen will appeal.

The recent severe earthquakes in California and along the Pacific Coast shake the logic out of Frank Stewart's theory, that the completion of the railroad across the continent would put a stopper on future operations of the kind by passing off the electric current eastward, over or through the iron rails. Now we have three overland railroads completed, yet the earthquakes still continue in full force and effect. But they are no great shakes, anyhow.

A hopeful and willing young lady said the other day that she wondered why so many eligible young men as there are in Austin could get along without marrying. She felt disgusted and exasperated at the fewness of marriages and said the matrimonial condition was really a measure of economy if the young men could only be induced to view it in that light. She is correct. Most of those who starve to death, die from dissipation, poverty or neglect, or who, despairingly, commit suicide, are single men. Many a young fellow, destined to a drunkard's or a suicide's grave, has avoided both by getting married and becoming the father of eleven children.

Dick Mitchell, brother to Johnny Mitchell, formerly foreman in the Justice mine, who left here with his wife and children to visit his old home and relatives in Redruth parish, Cornwall, last May, returned with them all right a day or two ago. They had a glorious good time, saw lots of comfortable and pleasant arrangements, and were satisfied to return to Austin, where they have plenty of friends, and can get along prosperously and well.

The gentlemen Piutes all wear three linen dusters apiece now, on account of the increased coldness of the weather. The lady Piutes also wear an extra blanket.

Ducks and geese are getting quite plenty in market; that is to say, the Piute warriors are bringing them in by the sackful and peddling them out at a dollar a pair for ducks, and a dollar for a goose. Great expectations are also formed of the result of the raid of our chief Austin hunters who went down to the Humboldt a few days ago. ALF. DOTEN. 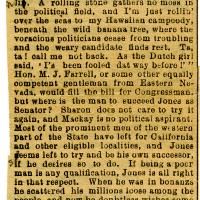