One of the chief characteristics of the genuine Reese River Pioneer is his truthfulness. He looks upon a lie as a rotten egg. George Washington might be able to hatch it out with his little hatchet, but he would disdain to even make the attempt. The Pioneer delights in frozen truths even in hot weather. Only yesterday Mr. Dadd, who arrived here among the earliest sufferers, and is a relative of Bill Dadd the Scribe, in the course of a conversation about the weather, informed me that notwithstanding the regular ninety degrees we have been sweltering under the last two months, and which state of heat is usual every Summer for several months at a time, ice is liable to form most any night. In fact, he says that over on Birch creek, a dozen miles from here, there is a big bluff of solid ice over a hundred feet high, which never thaws out. It is a prehistoric glacier which was there long before he arrived in the country. "Why," said he, warming up with the subject, "in August, '63, me and old Reese was a campin’ down on the river, where Birchim’s ranch is now, amongst the tules, and we found it mighty cold sleepin' under three pair o' double blankets. In fact, we found our coffee-pot skimmed over with ice every mornin', and it a settin' close by the fire. The coffee was all the clearer for it, howsomever."

As stated in my last, the Piutes are in trouble. So many deaths have occurred among them of late, from diphtheria, bowel complaint, etc., that scores of them have left in search of a more healthy locality. There was a general exodus of them on Monday last from the hillside south of town, all packing up and leaving for Stillwater. They did not neglect to take along with them their howling doctor, which was a satisfactory circumstance. He did not want to go, for he knows they intend to drown and cremate him in case of any deaths continuing among them at Stillwater. Mrs. Cook’s old dog "Bing," named after Bing Williams, the noted pugilist, died this morning from eating too much strychnine. Bing was as large and brave as a sheep, and his mistress admired him for his many noble qualities. He was death on cats, although he never caught or killed any. One cold, stormy night last Winter, old Bing got a couple of cats treed under the house. He couldn’t get in there, and they couldn’t get out, for Bing’s vigilant nose stopped the hole. They clawed a comfortable bed in the dirt, and snored the happy hours away, while poor watchful Bing laid out in the snow and nearly froze to death. Dear, faithful old dog, like a burned-out stove, or a cigar stump, as the newspapers always philosophically remark, when an old pioneer dies, "Peace to his ashes." But may his canine ghost haunt the midnight dreams of his heartless poisoner.

Speaking about prize-fighting, the few homely young ladies in Austin wear big bandages tied around their heads every day, and so do all the homeliest married women. Like prize-fighters after a battle, they wear bandages over the bangs on their foreheads. But they are not so belligerent and domestically quarrelsome as these bandages would indicate. They only wish to look pretty for an hour or two in the evening, so they tie up their heads and look viciously hideous all day. A blonde, or a red-haired woman, looks especially interesting with her head thus bundled up.

A dozen tons or more comes in every week to the Manhattan mill from the mines of Yankee Blade, three or four miles north of here. The ledges there are small, and possess the same general characteristics as these here in Austin, and they are of about the same degree of richness, but give better milling returns. The reason of this is that those mines are worked mostly by tributers and outside parties, who dress and sort their ore close in order to avoid extra cost of milling, transportation, etc. The principal mine is the Patriot, formerly the McCann, which shows a ledge six or eight inches wide, very rich in black antimonial and ruby silver. Ford & Johnson also have a little ledge of two or three inches, which skins out toward $1,000 a ton whenever they can manage to scrape out a ton. Jenkins' mine has a two or three inch ledge, which occasionally bulges out into a four or five inch bonanza, and his first-class ore mills over a thousand dollars per ton. But it takes a comparatively long time to extract a ton of ore from between its tough granite walls. To an old Comstocker, used to seeing hundreds of tons of ore handled daily, this reads ridiculously small, of course, but it must be borne in mind that these ore veins are exceedingly condensed. Each one of these rich little two to six inch veins equals a forty foot Comstocker, with the advantage of having less rock to handle, less timbering and far less expense generally. Pounds in the way of rick ore tell wonderfully sometimes in bullion results, particularly and notably in this section.

The dry working, chlorination process of the Manhattan mill is rather tough in some respects on human lungs. Especially is this the case in the battery department, where the air is full of ore dust all the time. This pulverized quartz operates as a constant poison in its action upon the lungs, and slowly and surely lives have yielded to its effects during years past. The men employed wear a patent muzzle arrangement, breathing through a wet sponge, and have a peculiarly vicious, bulldog look to an outsider. Some lungs yield far more readily than others to the pulp dust. Some cannot stand it at all, while others stand this or any other department of the mill right straight along, without apparent detriment. Charley Durning, the Superintendent, who has been through all parts of the mill every day for the last sixteen years, shows no bad effects from it. James Robinson, the weigher and receiver, and general boss of the ore and battery room, has for a similar period inhaled tons upon tons of pulp with impunity, and as for James Sullivan, the oldest veteran of them all, he is only happy and comfortable amid clouds of chlorinated chloride from the furnace. He feels refreshed by his regular daily lung feed, grows younger on it, and outside the pure air has no nutriment in it for him any more. When he dies his corpse will assay $40,000 to the ton.

This is one of the peculiar industries of this locality, and furnishes employment to a large number of boys as well as men. In the mining or extraction of these small, rich ore veins, some of the ore is very liable to get among the waste rock and be dumped as such. Boys purchase or are given the privilege of canvassing the various dumps and looking out for any of these stray pieces of ore. They become very expert at it, and whenever a carload of waste is dumped they can detect at a glance any bit of good ore that comes rolling down. Men turn over old dumps for what good ore may have got astray in former times, and both men and boys pick over ore that has been cast away by those engaged in dressing or assorting it. All these dump-pickers find more or less lucrative employment at it. They bring their little lots of ore to the mill, and it yields from $150 to $500 to the ton, giving them $50 or $100 in the way of monthly wages. There is not so much chance, perhaps, for dump picking among the mines of the Comstock, yet even there we have seen many an industrious gentleman of Mexican or Spanish extraction making good wages picking about the croppings and old dumps, breaking and selecting rock with his little hammer. And some day, when dog-in-the-manger Superintendents or Directors will allow it, some of those ancient dumps will be turned over with profit to both mine-owners and dump-pickers.

The Triennial Conclave of the Knights Templar, about to assemble in San Francisco, will be attended by many people from this section who desire to witness the grandest display of the kind that the Pacific Coast will be favored with in the nineteenth century. There are only four members of that knightly Order in Austin—Andrew Nicholls, J. R. Williamson, Henry Mayenbaum and Judge D. C. McKenney. How many of these four high-up Masonic gents will attend is not stated at present, but probably all will be "thar." Four better and more worthy resident members of this responsible community could not be selected. ALF DOTEN. 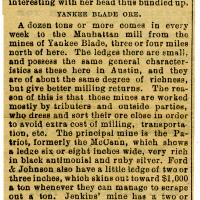