Entered at the Postoffice at Virginia City, Nevada, as second-class matter.

The sun’s great hot eye still continues to glower scorchingly down upon the numerous sinners of Eastern Nevada, and what few saints there are of us are losing patience, and getting heated into a grievous state of exasperation. The average thermometer has got permanently gaited to about ninety degrees in the shade, and bids fair to stand at that for the next two months. The long-continued drought is beginning to tell severely upon the crops, especially grain, and the hay will not turn out as well as was expected. Even the suckers and catfish in Reese river have cause for alarm, for there may not be enough of that famous stream left next Winter to freeze ice for a cocktail.

According to the veracious traditions of the Reese River Pioneers the hillsides and canyons in and around Austin were originally well wooded with nut pine and cedar, but it is certain that no such desirable condition exists here at present. Ranchers and fuel dealers haul wood from far-off localities among the mountain fatnesses, and the cars bring numerous cords daily from away down along the railroad somewhere, but the native woods of Austin disappeared and their roots were dug up long ago. In proof of their assertion that some kind of timber once grew here, the old Pioneers triumphantly point at a cedar which stands in John Booth’s back yard, carefully fenced and preserved. This giant of the forest is ten feet high, six inches in diameter, and it wears a hump-backed, bandy-legged look, suggestive of extreme old age. Its foliage consists of a moppy bunch of green, which throws about shade enough for two beetles and a grasshopper to hold a picnic in, but it is an indisputably genuine relic of past timber probabilities, and entitled to proper reverence as such. As a contrast to the numerous locust, poplar and other varieties of shade trees and ornamental shrubbery growing so thriftily throughout the town it is peculiarly interesting. Booth would not take $1,000 for it.

In a former letter I made descriptive and elaborate mention of the numerous small, but rich silver veins forming the famous and steadily productive mines of this locality. They permeate the country formation for miles in extent, and have been worked in the body of the mines, to the depth of 600 or 800 feet. Their general direction, dip and uniformity of character suggest the idea that way down in the deep levels of the world they may concentrate and come into one main mother vein; in fact, a grandmother vein, so to speak. There is nothing at all unreasonable in the proposition, and it certainly would be a very desirable arrangement. With so many exceedingly rich branches it surely should be a wonderfully affluent bonanza with untold billions of bullion in it. Every rusty old pioneer has always had full faith in the existence of this mythical mother vein; it fact, is willing to swear to it over four fingers of beverage on any proud occasion. What are veins without a mother? The very idea of so many rich little veins being simply branches from one parent stem is a gorgeous possibility, but the probabilities and chances that any of the present generation will ever arrive at the root and solve the problem as bona fide stockholders in this very desirable mother vein, are, to say the least, extremely problematical.

Away south, about seventy-five miles from here, are the mines of Jefferson Canyon. They were discovered in 1866, and have yielded richly at various times since. The bullion contains more or less gold, but not enough to disturb their integrity as silver mines. The ledges are large and well defined traceable for miles, there are two of them, running parallel in a northerly and southerly direction, but which is the father or which is the mother vein is not yet decided. Some very rich chimneys of ore have been developed and worked in them in times past, and Jefferson has contained quite an extensive and lively population; but through mismanagement and other adverse circumstances the mines gradually fell into disrepute, and now comparatively little work is being done there. Two mills—the Jefferson, of fourteen tamps, and the Prussian, ten stamps—were erected there; but both are lying idle at present. E. S. Goodrich, representing Minnesota capital, has several of the mines bonded at strong figures, and for some months past has been running the Jefferson mill with good results, making frequent shipments of bullion. He says he shall start up the mill again in a few days. Charles Kanrohat, chief proprietor of the Union mine, on the main Jefferson ledge, is now in Austin, having brought in a small lot of four tons of ore in order to test its working by the process used at the Manhattan mill. The ore is of a strong reddish cast, of a free milling character, containing a small proportion of gold, and is rich in horn silver. The bullion yield runs up into the hundreds, and with suitable works near the mine it should pay well. There are, evidently, millions in it, and the only trouble is to get it out properly. He says he shall now construct an arastra and adopt the leaching process. The ores of Jefferson comprise horn silver, black antimonial and ruby silver, sulphuret and chloride forms of silver and more or less gold. The ledges vary from three to thirty feet in width, dip east, and have been worked to the depth of 700 feet. Owing to the strong flow of water encountered deeper working will involve the employment of considerable capital, but there is enough good ore in the upper workings to keep practical mining men and bullion producers busy for years.

At Belmont, between here and Jefferson, the trouble has been to find the proper process for working the ores to the best advantage. The conclusion has been arrived at that the leaching process is the best, and the one to be adopted. The principal mill in therefore about to be changed to a leaching establishment, and the result will demonstrate itself before long. There are many mines and mining districts in this State languishing for the proper process for working their ores. Leeching has been sometimes advantageously resorted to in surgery, and perhaps the same may be said of the Leaching process in ore reduction.

One of the saddest events in the youthful society element of Austin which has occurred for years was the sudden death of Eddie Rowe on Tuesday last. He was a robust, healthy young man of eighteen, son of James H. Rowe, late President of the Austin Miners’ Union, and employed himself in surface mining operations. He was a prominent member of the Junior Baseball Club, which went from here to a contest with the Eureka Baseball Club a few days ago, at which time he is said to have received a severe strain. He also contracted a bad cold, resulting in subsequent trouble at times. He participated actively, however, in the celebration of the Fourth, and danced among the gayest and happiest at the Pioneer ball in the evening. Subsequently he was attacked by a very decided obstruction, or strangulation, in his bowels, resulting speedily in death. He had plenty of medical attendance, and a surgical operation was proposed, but was not allowed, neither was a post-mortem examination allowed, therefore the actual cause of his death is not definitely understood. He was a most exemplary young man, and a general favorite, and the news of his sudden and most unexpected death spread general consternation, for when so promising a young man, in the full vigor of life and health, thus lies down and dies, all naturally wonder whose turn will be next. On his death-bed he called for his young friends and companions, bade them all a final adieu, coolly and calmly made his requests as to the arrangements for his funeral, designating the songs to be sung, the pall-bearers, order of procession, and other details. The funeral was very largely attended, and the numerous grief-stricken friends of Eddie Rowe will long remember the sad occasion.

The gratifying change in railroad and mail time gives us the ENTERPRISE one day earlier now throughout Eastern Nevada, we receiving it here in Austin only the next morning after its publication, instead of two mornings afterward. Thus we are precious little behind in the matter of latest and fullest telegrams, or anything else in the shape of news, from all parts of the State and the world, when we thus get hold of the ENTERPRISE. If your circulation is not many times increased forthwith throughout this section, it ought to be, for the price of the paper brings it within the means of everybody.

Died last Tuesday a death which was not glorious, for it crawfished most wretchedly, abjectly and inconsistently on its death-bed. It pulled down its own colors, sat down on them and defiled them. It’s a filthy bird that befouls its own nest, and when the former friends and supporters of the Democrat read its valedictory obituary in its own columns they were sorry that the “sooner” had not died sooner. The old standard pioneer paper of Austin, the Reveille, now has the local journalistic field entirely to itself. The field is limited, and can only support the one paper anywhere near decently. The Reveille is a first-rate, well-managed paper, and well worthy of even more liberal support than it receives. A good local paper is always one of the best elements of success in behalf of any well-ordered, social and business community; and the people of Austin should not fail to substantially recognize that fact. 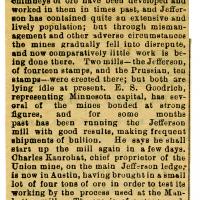