Yesterday was the hottest of the season thus far, the average thermometer scoring about ninety-five degrees in the shade, which is really hot even for Austin. The laziest man felt a moral consolation in gazing at the elevated mercury, and as he swabbed the sweat from his reeking brown, remarked to the wickedest man that this was a little the goldurnedest weather ever he struck. And the wickedest man replied that it was cool as frozen cucumbers to the way they were having it in Battle Mountain, Elko or Hades. The Piute chieftains dress exclusively in linen dusters, while their more unfashionable white brothers go in their shirt-sleeves or wear their Winter coats. The ladies all wear their Winter dresses, hats and all, when they appear on the streets. Nobody looks for a change in the weather before next Fall, unless there should be a cloudburst and a flood in August, by way of variety.

Now is underground; down in the mines. These mines are not so hot as those of the Comstock, by any means. They are not one-fourth as deep, and being connected throughout the honey-combed bosom of old Lander Hill, the air is free and pure, with good draughts in all directions. The average temperature in Winter is between fifty and sixty degrees, and, in Summer it runs as high as eighty, being of course regulated to a very considerable extent by the air from the surface. The formation is different from that of the Comstock, showing no indication or probabilities of any such extreme degree of heat as exists in the lower region of those mines when these shall have attained a similar depth. By the way, a brief sketch of the principal mines and mining operations at this point would not be uninteresting.

THE MINES OF AUSTIN,

Or Reese River District, were principally discovered in 1862-63. The pony express riders on the old overland stage route took a short cut up through the canyon where Austin now is, a couple of miles to the south of the stage road, in crossing the Toiyabe range, and one of them discovered and located the first ledge, near the mouth of the canyon. This was named the Pony Express, and subsequently yielded considerable good ore, but being eclipsed by its richer neighbors, it fell into disrepute and neglect years ago. This canyon naturally received the name of Pony canyon. John Frost, then an enterprising hotel landlord where the stage road crossed the Sierra Nevada, followed suit in December, 1862, by coming and making the first location on Lander Hill. He located the Oregon, North Star and other famous ledges, right in the midst of what are now the principal mines, and may be fairly considered as the first practical locator of the Reese river mines proper. Other locations followed, and the great Reese river excitement is a matter of history. These mines are situated along the southerly slope of Lander Hill, within the upper borders of Austin, like the Comstock in Virginia City, and form a portion of a broad ore belt or series of small ledges extending for several miles in a direction east of north and west of south—in fact, almost northeast and southwest. Outside of Lander Hill, however, there are no producing mines of note in the immediate vicinity of Austin, except those of Yankee Blade, three or four miles north, and the Breen mine, down nearer the edge of the valley. The Breen is not yielding much at present, and only about ten tons per week of high-grade ore is the average yield from the Patriot and two or three other mines at Yankee Blade. These last mentioned mines possess the same general characteristics as those of Austin, and yield higher grade ore, but they are much troubled with water, and their development materially retarded. In fact, the whole range for miles in extent seems to abound in these small ore veins. Some of them contain rich pockets or deposits of ore, and there is no rule for their discovery; they are simply where you find them.

Comprises the mines of Lander Hill, here in Austin, and which are principally owned by the Manhattan Silver Mining Company. This group, or system of mines, is comprised within the extent of from half a mile to a mile square and is a perfect bee hive of mining industry. They have eight sets of works in active use for hoisting and otherwise promoting the underground working, and these works are of the most effective and substantial pattern, like those of the old Comstock, those of the Lander shaft and the Paxton incline being the chief representative, and really models of good workmanship. Indeed, as for that matter, there is no excuse for anything else, for at the foundry and machine shops of the company, which are near at hand, anything required in the shape of machinery is turned out at short notice, and inferior to nothing this side of San Francisco. At one of the works two Burleigh air compressors are in constant operation supplying the motive power to four donkey engines underground, employed in sinking, pumping, etc. None of the workings of these mines extend below the depth of 800 feet; in fact, most of the workings are about the 600 level. The Lander shaft is the only deep perpendicular shaft. It is 1,000 feet deep, but the lower portion of it not being needed, is reserved for future reference and deeper mining requirements. The Paxton incline is 1,500 feet in length, following the dip of that ledge at a grade or inclination of twenty-two degrees. It shows a fine, rich ledge in its face and at other points. The general dip of these ore veins is considerably flatter than that of the Comstock, being from twenty to thirty-five degrees. And most decidedly these mines are full of

As before remarked, the veins are small, from three to six inches wide, occasionally bunching out to a foot or two in width, but they are condensedly rich, the ore, as worked in the mill of the company, which is near at hand, averaging from $250 to $300, or thereabout, per ton. It is essentially silver ore, carrying little or no gold. It contains antimony, iron, copper and other metals of the base sort, but is successfully worked by the dry crushing, Stedefeldt process. The mill works less than thirty tons per day on the average, and it keeps the mines working very lively to supply that amount of ore. In fact this cannot always be done, and the mill has had to lie idle for months at a time waiting for a good accumulation of ore. There are thirty or forty of these little ore veins, more or less, which have been worked from the surface down to the 600 level, and they are all the way from 20 to 300 feet apart, the general country rock between and around being granite or gneiss. They were composed largely of chloride in their surface workings, but changed to sulphuret as the water level was reached. The water is easily handled by the pumping and draining arrangements. But the chief eccentricity of these little veins consists in the

Not one of these veins has been followed downward without a break. This is evidently owing to the fact that the whole surface or side of Lander Hill has been disturbed, bodily broken, and slid to the southward and west through some overpowering influence in its internal economy, thus causing very abrupt breaks in the continuity of the general vein formation of its bodily make-up. These breaks are more frequent and demoralizing near the surface than in the deeper workings. A section of the vein may be followed for 40 or even 300 feet in sinking, but then must come a break. At once a drift eastward is started, and sooner or later, perhaps in 20 or 300 feet, the other portion of the vein will be found. Thus the old, original veins have been followed from the surface down through frequent breaks without losing their identity. When a bonanza on the Comstock peters out there is no rule for finding any more of it, but here it is "go east, young man." It pays to do so.

The uncertainty thus attending the following of the veins, and the large amount of "dead work" involved in hunting for the breaks or lost portions, gradually induces the adoption of the tribute system, so common in the old country. Tributers are allowed to work certain vein sections for a certain portion of the ore or bullion result. Many old miners prefer this to regular day’s pay. Some of them thus work for year without realizing a cent, while some lucky ones who strike a "good pitch" clean up hundreds, and even thousands of dollars in a very short time. One or 200 men are probably working on that same layout in these mines to-day, the Manhattan Company furnishing them the requisite tools, powder and all other working facilities, and even supplies of food.

Probably 600 men are kept constantly employed by the company, either on the pay-roll or "on tribute," and the system adopted has been of permanent benefit. As a real matter of fact the company directly or indirectly supports and maintains the entire town. Yet there are numerous men who roundly abuse the Manhattan Company, although they cannot very lucidly and logically explain why they do so. They simply like to on general principles.

Encouraged doubtless by the present long-continued and lucrative run of the mill, the Manhattan Company have had a plank floor laid in their machine-shop, and treated their dilapidated old office to a new coat of whitewash inside. Chief clerk Farrell has also got him a new coat, and everything looks prosperous, and the tributers and dump pickers are hurrying in small lots of ore to the mill in order to get a little money with which to properly celebrate

All the stores and business houses will close at 8 o'clock A. M. on that festive day, and everybody proposes joining in the grand celebration. Austin has not celebrated for three or four years, and she is going to do it up brown this time. John Frost, the old locator of the mines, has been unanimously chosen for Grand Marshal, and is out daily practicing on horseback, in order to get a toney Napoleonic style onto his saddle appearance; the music and the powder and fireworks are all engaged, plenty of money is raised for all purposes, and if Austin does not have a snorting old celebration it will be because there is some unaccountable miscue somewhere. 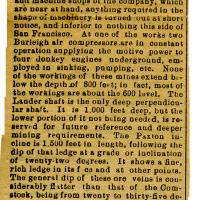