Jonas Seely, whom we all know, arrived here on Tuesday night’s train, and left next day for Ophir Canyon, about fifty miles to the southward of Austin. There, as heretofore stated, he is a principal owner of the Twin River mine. It is one of the oldest and most famous mining locations in this section, and was formerly known as the Murphy mine. It has yielded large quantities of silver bullion in times past, but through mismanagement its productiveness failed, and it gradually fell into disrepute. About a year ago, through the representations of L. J. Hanchett, a well-posted mining man, Seely and other capitalists in Denver became purchasers of the mine for $20,000. With Hanchett as Superintendent, a new working shaft was started, first class hoisting works erected, the old twenty-stamp mill overhauled, and everything put in good trim for successful future operations before Winter set in. The mine is now yielding handsome returns in the shape of regular bullion shipments—$1,200 or $1,400 every three or four days. Another company of capitalists having secured the Jefferson Canyon mines, some fifteen miles to the southward, a similar yield of bullion is coming in from there for shipment, and the Belmont mines have resumed production and bullion shipments. Thus it will be seen that quite a lively stream of bullion is again flowing from the mining section southward of here, which, added to the regular production of our local mines, brings Austin into strong and increasing prominence as a bullion-shipping point. Seely is taking a look at his mine and will be back in a day or two. He prospered much, financially, in Denver, and has now bought him a vine and fig tree in Oakland, where he will dwell with his little family amid the salubrious sea breezes and fogs, and end his days peacefully and comfortably in full view of the Golden Gate and the broad blue Pacific.

People of mining experience and observation are cognizant of the fact that the mineral resources of Nevada, and especially the great eastern portion, are far from being understood or appreciated; indeed, they are merely in the infancy of their development. This section of the State is simply a vast plateau, intersected with numerous isolated ranges of hills and mountains of greater or lesser magnitude, and all of a strongly mineralized character. Good timber is not abundant, and the streams are not large, yet there is sufficient wood and water most anywhere to meet all ordinary demands, and the pasturage is excellent. The pioneers of this State, during the first rush of the silver excitement, scattered themselves prospecting for more Comstock ledges throughout these little mountain ranges and valleys, and they certainly did do a vast amount of prospecting. The result was the discovery of numerous mining localities of various degrees of merit and eligibility, very few of which were properly developed. Therefore it was that those which showed mineral wealth superficially abundant and the easiest got at, like Pioche, White Pine and similar other places, were suddenly brought into brilliant prominence, and as speedily were worked into a decline and comparative obscurity. Scores of little towns and mining settlements sprang into a sort of mushroom existence, and, in turn, were abandoned; yet few were destitute of real merit. Thus it is that the localities mentioned in the commencement of this letter as now producing remuneratively in bullion have passed through their seasons of mismanagement and disrepute to a prosperous certainty. And this will yet be the experience of many others of the old localities. Moreover, the former prospectors, nor those of subsequent days, did not find all the mines, or even explore all the eligible localities by any means. They merely found those which were the most readily accessible, and it still remains for gradually advancing civilization, as it were, to most surely and systematically develop the real mineral wealth of the country. The mines thus far found have mostly been near the main routes of travel through the State, one discovery leading to another. Wherever new routes of travel and new sections are opened, there will new mining discoveries be made. Look at the section now being opened up and developed by the Carson and Colorado Railroad, for instance. And in the not-far distant future another new railroad will pass through the very promising and comparatively unexplored country away south of Eureka, Austin and the old central routes of Overland Travel, and very possibly develop more and better mines than have yet been opened outside of the Comstock. The probabilities in that direction are exceedingly good. Moreover, competitive transportation facilities will give us cheaper living, cheaper materials and appliances for more advantageous working, and many a mine of known value will be worked which is obliged to lie idle now. Throughout Eastern Nevada are many such mines, and not a few can be designated right here in the Reese River section. Nevada has a more prosperous future than most of us, at the present time, squarely anticipate or fairly appreciate.

Church affairs occupy a due share of Austin public attention, considerably more than baseball, although balls, dances, surprise parties and similar festivities of an irregular nature are exceedingly well patronized. It is true that the practice games of the baseball club every Sunday are witnessed by many a good, churchgoing Christian, and that some even went with the club on its recent disastrous expedition to Eureka; but it seems requisite to the average Austinite to mix some kind of festivity with his religion, like bitters or wine in his cocktail. Last evening the postponed festival of the Episcopal ladies took place at International Hall. Numerous tables were loaded with strawberries, ice cream, cake and raspberry lemonade, a full string band discoursed the most inspiring music, the prettiest girls in town waited upon the tables, and the weather was delightful; yet, strange as it may seem, this festival was a sad failure, financially, the attendance being decidedly poor. Everything was delicious, and the failure must be attributed to that string band—only that and nothing else.

"Music arose with its voluptuous swell—

Yes, there were the fiddles, the clarinet, the bass viol, the piano, and the jolliest, most inspiring dance music; but alas ! no dancing was allowed. It was Hamlet left out of "Hamlet" with a vengeance; Christmas dinner and no turkey; lemonade without sugar. If the music also had been left out it would have been all right, for who wanted to go there to be thus aggravated? The few young fellows and girls who were present hitched around impatiently in their seats, or drummed waltzes and quadrilles with their shoes, tapping time to the music, getting more and more nervous, until finally, one after the other, they all got out and went home exasperated before 11 o'clock. One of the most substantial church-goers in Austin is an old Comstocker. He weighs about 160, and has a voice like Jack Stephens, of Gold Hill. He would like to sing in the choir, but they do not require him. With a proper amount of stops, brakes and governors fixed to him he might do for a church organ, but in solo or chorus he could drown a locomotive or a Washoe mule. And to hear him roar his favorite song of "Meet me there at Heaven’s gate, sweet Belle Mahone," is too snortingly utter for anything—just as though he would be allowed singing around there anyhow. It would be like the famous ram's-horn blast which was blown beneath the walls of Jericho.

The mill started up again on Monday morning, after a three weeks' rest, and is pounding and grinding away after its chronic regulation style, with plenty of ore to keep it busy for three or four months or more. The new line shaft, seventy feet in length, with bevel gearing, from the batteries to connect with and run the pan department, works splendidly. As stated in a previous letter, it is in sections of about twelve feet each. It is of the best wrought iron and all its couplings, journal boxes, bevel wheels and other castings, together with the requisite turning, etc., was done at the foundry and machine shop of the company right here in Austin. It is a very substantial, neat and well-finished bit of work and no better can be turned out this side of San Francisco. This mill is a dry crushing establishment and works the ore by the Stedefeldt process, therefore does not rush through so many tons a day as the Comstock mills or wet crushing mills generally. Like the mills of the gods, "it grinds slowly, but grinds exceedingly fine." And it pans out rich.

The Widow McWinzle and Professor Snider got married very quietly Tuesday evening and left for Los Angeles next morning, where, in the land of sunshine and flowers and of the vine and fig tree, they will make their future home and be happy drying raisins and raising chickens for a living. The widow, however, has coin enough in bank to keep them both above want. The Professor magnanimously left his big telescope on top of Mount Promethius for our friend Spykens, just to show that he bore no malice and did not wish to triumph over him. As for Spykens himself, he has come in from the hills, now that the widow is married and gone, and feels better, notwithstanding the following, which she sent him as a parting shot:

His charms away from love and me,

But where those charms did chiefly lay

I’m blessed if I could ever see.

In parting with the Widow McWinzle and Professor Snider Austin society loses heavily, but everybody wishes them well, knowing that what is their gain is our loss. 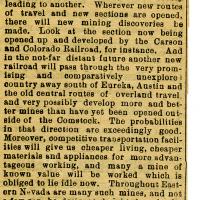