Entered at the Postoffice at Virginia City, Nevada, as second-class matter.

The Colonel, Captain, Lieutenant and the Inspector mentioned in my last week’s letter as being here buying up all the able-bodied regulation-sized horses they could find in Reese River Valley and vicinity for United States cavalry service down in Arizona, left the equine rendezvous, Rooker’s ranch, on the river, day before yesterday, with over 300 head, driving to Wadsworth, where they will be shipped over the Central Pacific to San Francisco, thence to be forwarded to the seat of Indian war in Arizona. Another band of horses also passed down the valley, bound for Wyoming. This exodus of horses included several mares with young colts. These colts being too young to be taken along were given away to whoever would take them. Our Austin school-boys somehow got wind of it, and the result was a general surreptitious rush for the valley of boys, little and big, regardless as to whether school kept or not. The colts all got owners, and quite a number were brought to town. One boy came home the happy proprietor of two colts, while other colts came in with half a dozen ambitious proprietors apiece. One little yellow colt paraded the main street, the center of attraction of an admiring crowd of small boys, all of whom claimed an interest in him, and he pranced and frisked about apparently interested in them all. About dusk his lodgings were decided upon, and he marched to a woodshed on a back street amid a triumphal procession of boys and girls bearing bunches of hay, pitchers of milk, sugar, chunks of bread or anything they thought he would eat. It was some like a circus parade, and many of them would have been delighted to sleep with that colt if their parents or big brothers and sisters had not hunted them up and taken them home. Young Austin now talks juvenile horse, and this sudden dispensation of colts is the chief sensation of the day.

Every run of the mill gives good luck to somebody, especially among the tribute workers in the mines. Many who thus suddenly realize a nice sum of money from the crushing of their little ore piles, as the result of many or a few months' patient search and successful labor, just quietly square up all their back bills, put some coin in the bank, and quietly go ahead working for a larger stake. And it is claimed by the storekeepers and others interested that many who thus become lush in the way of funds "sink" their money and forget or neglect to come forward and settle either new or old bills. Others again, after honorably liquidating their indebtedness, have a good time with their friend, get themselves an outfit of store clothes, and take a trip to their old home, or depart to make a new home in some more genial and promising locality. Harry Blewett, formerly of Gold Hill, and well and favorably known among the miners of the Comstock, left Wednesday morning for a visit to his relatives and friends in the old country. He goes to Camborne parish, Cornwall, whence come so many of our best English mining boys. Harry has been a hard worker in these mines for the last half dozen years, and recently struck it pretty good in the Ruby, where fortune favored him with a nice bunch or so of high-grade ore. He takes along plenty of coin to have a good time with, and leaves some behind for a nest-egg, proposing to return in the course of three or four months. Harry is deservedly popular, and his numerous friends gave him a private complimentary social on Saturday evening as a sort of well-wishing send-off. August Betz, another bonanza man and old resident, leaves next Monday morning with his family for their new home in Oregon. Speaking of bonanza men, I notice that

Appears to be in luck. A Washington dispatch, dated May 7, says: "The President has recognized H. Harrison, of Gold Hill, Nevada, as Vice Consul for Denmark." Now, this can be none other than our festive, rheumatic friend, "Old Man Harris," the well-known old-time assayer of Gold Hill and Silver City. Everybody knows him, and he knows everybody else. He is a well-read man; in fact, belongs to the Improved Order of Red Men, I think, and is very way well fitted for the Danish Consulship, speaking the language like a native. He probably obtains this Presidential “recognition” through the influence of Senator Jones, who has always been his warm friend. The worst that can be said of Harris is that he has harassed his friends and neighbors always with the worst puns that a chronic punster is capable of, and it may be considered that Jones is doing a social service in shipping him off to Denmark. Harris has been constantly afflicted with rheumatic pains and contortions as a standing punishment for his incessant puns, but he can’t help punning, anyhow. If he were dying in a garret, his last rheumatic remark would be: "This is a room-attic arrangement.”

Throughout Eastern Nevada mining matters are at present rather on the improve. Even the mines of Eureka are looking up a little, and Tuscarora is inclined to boom. Here in the Reese River section things in that line are looking well, and promising better. Pending the repairs to the mill the mines of Austin are actively working, with a large amount of ore in sight, and a good prospect for keeping the mill running three or four months or more, when it starts up again, which will be in about a week. Out at Jefferson and Ophir Canyons the mines are being energetically worked, and making regular bullion shipments, and at Grantsville and Belmont the old workings are being started up, with better promise than usual for a strong and successful season’s work, and permanent future success. In fact all mining operations south of here, in the Toiyabe range, excepting the Victorine mine, at Kingston, are decidedly looking up. Over in Nye county work is being promisingly resumed at various points, and the season generally throughout this section is opening auspiciously.

Which has been struggling under a cloud, is now being brought out properly at Midas Flat, a couple of miles to the northward of here. It is one of the oldest locations in the county, and is known as the Breen mine. The original locators of it did pretty well at first, but finally starves out and abandoned it. After lying idle for years it was relocated by Breen, who, with his partner, have been working it for the last five or six years. They put up a horse whim to do the hoisting, and occasional good bunches of ore met with have kept them in beans ad bacon, but the ledge was small and unreliable and they had considerable water to contend with, so they could not get rich. Latterly, at the depth of about 150 feet, they developed a very respectable looking ledge, beyond the “breaks,” which shows from a foot to eighteen inches of high-grade antimonial or ruby silver ore, which will mill away up in the hundreds. The other day Breen sold out to a company of capitalists for $20,000, and a strong force of men are now at work enlarging and timbering the shaft, and arranging for steam hoisting works, with a view to working the mine for all it is worth. It promises to develop into a very valuable bit of mining property.

What’s the matter with old Ben. Butler? He seems to be getting cranky in his old age, as well as narrow-minded in his ideas. Because we of the Pacific Coast have carried our point in the exclusion of the low-working Chinese, he expresses his desire to do the same in the matter of Irish immigration. Now that he has been made Governor of Massachusetts by the Democratic Irish vote, he coolly says he would like to prevent the landing of any more poor Irish on the sacred wharves of Boston. None but high-toned Chinamen or well-to-do Irishmen will suit the esthetic immigration ideas of the aristocratic Governor of Massachusetts. The chances are that Ben. Butler is at heart a very illiberal American, saturated with the unprogressive opinion that either Americans or Irish should only rule one country at a time, and be recognized, identified and defined in their allegiance. Perhaps shrewd old Ben. Is deliberately planning to be elected Know-Nothing President of the United States; but he never will be. The Democracy elected him Governor of the old fossilized State of Massachusetts. Perhaps they may continue to admire and indorse the old cock-eyed politician, puffed up with his illiberal American ideas, and keep on voting for him.

The Digger Indians, over in California, are stated to be predicting a very hot Summer. That may do for the Golden State, but, as stated in one of my recent letters, Colonel Charley, our Piute Wiggins, distinctly and irrevocably states that there will be snow in every month this year. This is a cool and hopefully refreshing assurance for us residents of the sagebrush. Professor Snider inclines to the opinion that Charley may not be far from right, and dogmatically recites his original proverb: "Winter still lingers in the lap of Spring. 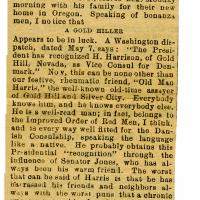