Nobody in this section ever saw a rougher May-day than was last Tuesday. Snow and hail fell fast and furious all day, and if it had been a little colder, good sleighing would have been furnished, but although several inches fell, only four or five inches at a time kept in sight and that was soft and murky, not lasting long. If there is anything in the old saying of the weather sharps about a month coming in like a lion and going out like a lamb, the closing of May should be exceedingly lamb-like. Green peas are already plenty in our markets, and in the matter of strawberries Austin is not at all behind the Comstock. Cherries are also in market, and all the other fresh fruits will be along in due season. Snow, frost or any other adverse conditions of the weather make no difference to the Austin fruit and vegetable market. Even at the worst we have enough canned fruits at the grocery stores to last a year or so.

An army agent has been engaged the last two or three weeks in Reese River Valley buying 300 horses for cavalry service in Arizona, and the other day a Colonel, a Captain, a Lieutenant and an Inspector arrived here by rail from San Francisco to attend to the matter. They quartered themselves at private lodgings, bringing along their own whisky, tobacco and similar commissary stores, and yesterday they got a carriage and rode out to Rooker’s ranch, on the river, some eight or ten miles from here, where the horses have been gathered in by various parties from all directions. The Inspector is supposed to pass judgment upon each and every animal, seriatim; but what the Colonel, Captain and Lieutenant have to do in the matter is not clearly understood, unless they are along to inspect the Inspector, and stick red tape and sealing wax on each horse as fast as they are passed upon and accepted. From here the horses will be driven to Wadsworth, and then shipped by rail to San Francisco, whence the cavalry will proceed to Arizona with all possible dispatch, there to join General Crook in his efforts to subjugate the hostile, murdering Apaches. To most people it would seem a little strange that these army agents should come over into Nevada for cavalry horses, instead of seeking them in the southern ranching sections of California; but they say that horses, although plenty and cheap there, are generally too small and scrubby. What they want is good, sound, well-broken horses, none less than fifteen hands and an inch high, and at prices from $60 to $120 each. The chances are that Uncle Sam will have to pay the latter figure for every horse.

The repairs and overhauling of the Manhattan mill are progressing energetically. After a steady run of six months, the pan-millers and other ore reduction arrangements were naturally found to be much worn and in need of renovation, but the most imperative reason for the stoppage was the giving out of the large heavy belt running from the batteries to drive the pan department. This belt was of rubber, twenty inches wide and about 150 feet long. It cost $600, and had been running about three years. Like its predecessors, it had to wear out in due time, splitting and calling for frequent patching up of late. The first belt placed there cost $1,000. Some weeks ago, in view of this belt giving out, and the cost of maintaining belts in that particular and very essential position, it was decided to substitute a line shaft with bevel gearing at each end. The requisite shaft, with all its attachments, boxes, gearing, etc., was accordingly cast and prepared at the foundry and machine shops of the company, and was got ready just as the big belt refused further duty. The shaft is four inches in diameter and seventy feet long, being cast in sections of about twelve feet each. The whole constitutes a very creditable piece of work for an establishment away out in the hills—in fact, it could not have been done any better in San Francisco or the East. Moreover, several little improvement, original here, were adopted. For instance, to each one of the series of boxes or journal bearings is attached a substantial iron plate two or three inches square, which, by means of a strong spiral spring, is made to constantly press a square cake of tallow against the journal, thus keeping it amply and unfailingly lubricated. A solid foundation of stone is now being prepared, and in a couple of weeks or so the shaft will be in place, all other requisite repairs completed, and the mill started into full operation again.

W. A. Hall, foreman of the Manhattan machine shops, was a day or two ago unexpectedly made the pleased recipient of a handsome as well as valuable present from Melville Curtis, Superintendent of the company. It was in the shape of a very neatly moulded bar or brick of silver bullion, seven inches long by three inches wide, and an inch and a half thick, weighing 117 ounces and worth about $150. It was presented as a mark of esteem and appreciation of his long and efficient services. Mr. Hall is a thorough master mechanic, and has been in command of the blacksmithing and machinery department for thirteen years, commencing with a small forge in a 10X12 shanty, and increasing with the requirements, year by year, until now he runs about 150 feet of machine shop, complete in every respect. He is a very energetic, as well as ingenious, mechanic, originating many valuable improvements, and will terminate his long and faithful service by a trip to his old home in the East, where he proposes to settle down with a comfortable competence, financially, for the rest of his days. Ross, the famous and trusty messenger on the Central Pacific Railroad, who recently so valiantly defended the express car for some hours successfully against a band of desperate attacking robbers, was rewarded with a gold watch and $1,000 in coin. Now, let robbers lay for that, and also for Hall’s silver brick, when he passes over the road. But Hall thinks a heap of that little brick, and would fight as hard for it as Ross would for a whole car-load of treasure.

Many a former resident and worker of the mines of Austin can now be found hopefully extending his mineralogical investigations to other parts of the State, and in all newly developed and promising localities. Thus it is that they are found at various promising points along the vicinity of the Carson and Colorado Railroad. In Walker Lake Mining District, at the foot of Walker Lake, within five miles of Hawthorne, some Austinites have a little five-stamp mill, recently started into operation, working ore from their mines on Cat creek, near by. They are meeting with excellent paying success thus far, and expect dto be millionaires in due time. During the coming season some very important and valuable mining developments are pretty sure to be made in the interesting section of country now being opened up by the Carson and Colorado Railroad.

Has Sharon really regained control of the Yellow Jacket Mine? If so, waterlogged Gold Hill has a more hopeful future for its end of the Comstock. He will not care to pump out all that water from the lower levels just yet, but he will go for the upper workings and old bonanza levels for all they are worth. The Yellow Jacket is the old king pin of the situation. Sharon got crowded out and has been kept back long enough, and if he has really succeeded in getting the upperhand of the situation once more, he has thousands of friends to rejoice that the quiet little keen-eyed boss financier is on deck again. Anyhow, everybody has been willing to welcome a change where the chances are for the better. The Comstock has been and still is the mining pulse of the State, and the leading indication of its financial health, wealth and prosperity.

Grand Chancellor Mitchell, of the Knights of Pythias in this State, has paid his visit to the Lodges of Eastern Nevada, and gone back to his Comstock home. His stay in Austin was brief, but he seemed to enjoy it hugely, and stayed one day longer than he intended, for he was exceedingly well treated. Toiyabe Lodge No. 9, here in Austin, is composed of the best citizens, well up to the work, and is well organized, splendidly conducted and deservedly flourishing. All true Knights are welcome within their castle hall, and their latch string hospitably hangs outward. Mitchell took a good and appreciative look at the public institutions, the resources and the loaves and fishes of Austin. He critically and approvingly inspected the various mining works and the mill, but never liking to leap recklessly, as it were, he did not plunge into the deep, dark recess of the mines. He left Austin well impressed, however, and may visit us again some day, perhaps.

Sypkens willfully stays out in the hills, prospecting, and the Widow McWinzle has given him up as a hopeless case. He can now return with perfect impunity, for she has made a successful mash on Professor Snider. The festive old fellow wilts under the melting influence of her poetically sympathetic eyes, like a pigweed beneath the rays of the midsummer sun, and it is not difficult to foresee a connubial consolidation. The widow is not poor, neither physically nor financially, and Snider is resigned. Some of the envious and unkind slyly whisper that it’s a "big joke on Snider," but he thinks he can stand it. The widow has at last found a name that she can rhyme into poetic verse, and gently, hopefully, murmurs and scribbles Snider, bider, hider, guider, wider, cider, ride-ah ! 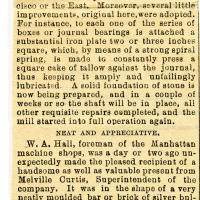