The inclination of the weather to be stormy during the last three or four days has been very encouraging to the hopes of most everybody, the ranchers especially. Only about enough of hail, snow or rain, however, has fallen to moisten the surface and law the dust. Two inches of snow fell yesterday morning, and in the evening we had a very eligible hail squall. Eastern Nevada stands sadly in need of a goodly amount of snow, rain, or something of the sort at this present time. Even a cloudburst would be welcome. This section has not been thoroughly saturated with heavenly moisture for several years, or since 1874. In October of that year there was an overplus of water, so far as Austin was concerned, a fearful cloudburst occurring on the 16th, which created a disastrous flood. A huge river suddenly generated and turned itself loose down Main street, sweeping everything before it. The Postoffice, Reveille office and other buildings were totally demolished, including their contents. Awnings, porches, sidewalks and all that sort of thing went down stream, and one man was drowned. For awhile even the stoutest old sinners felt paralyzed, and would not have been surprised in the least had the last vestige of Austin been washed down into the graveyard at the mouth of the canyon.

Has ever since been spoken of as a stated era in the history of Austin, and all the old pioneers date previous or subsequent events accordingly. Children’s ages are reckoned from it, as being before or after the flood, and all other current events, historical, financial, political or otherwise are dated from that same memorable standpoint. The old pioneer stiffs who can’t die are eternally giving all newcomers powerfully exaggerated reminiscences of that remarkable flood, and prognosticating a recurrence of the same liquid calamity, evidently standing more in fear of water than of whisky. In fact there seems to be a sort of antediluvian aristocracy grown out of that watery epoch, all who have come here since the flood being looked upon as emigrants, so to speak. Old Jim Sloggins, who is a prominent representative member of the Society of Reese River Pioneers, gives more of the details of that flood than anybody, and is willing to swear to all he tells. He says it came down street with a breast twenty feet high, of quartz wagons, mules, cordwood, houses and other debris, rolling, foaming and plunging. And as for the storm itself, “it was like every drop of rain was a continuous stream from a fire injun, and all the side hills simply slopped whole sheets of water down into the ravine.” Day before yesterday a hail squall passed over here which rattled down some coarse hailstones about the size of marbles or walnuts, but Jim said they were nothing but mustard seed in comparison with the hail that fell “at the time of the flood. Them hailstones,” says Jim, “was bigger’n baby’s heads; they was even too big even for the Piutes to play base ball with next day.” Speaking about

The pioneers of Reese River and Austin were from California and the Comstock. Many of them are here yet, and they still form a leading influential element in the population. The old time energy which adventured them here, so to speak, still remains with them, and they continue making their mark. Among the miners swinging their picks down in the small, but wonderfully rich veins of this silver ore belt, are numerous old Comstock miners, who rank among the best, as they naturally should.

Bonanzas are not so large in these mines as they are in the Comstock, but they are more frequent, and, owing to the system of working “on tribute,” or by contract, the miners frequently find themselves bonanza men, which they could not be on the Comstock, unless they struck it in stocks instead of through legitimate mining. A “pitch” pocket strike of rich ore, two or three feet wide, means something in these mines, and the tributers get well rewarded occasionally for their long-continued, patient hard work exploring and developing. The result, quite frequently, is shown in some of the boys taking a trip home to the “old country.” Dick Mitchell, brother to Johnny Mitchell, who used to be foreman of the Justice mine, has been working for the last two or three years in the Plymouth shaft of the Manhattan Company, with two or three other lessees, or tributers. They did very well at the previous run of the mill, nearly a year ago, and one of the boys went back to see the old folks in England. During the present run of the mill they have done still better, and Dick proposes taking trip with his little family to visit relatives in the old home of his birth. Redruth parish, Cornwall. He expects to start about the 10th of next month, and don’t know whether he will come back or hot. But he will.

Eastern Nevada is famous for the production of choice beef for the markets of the Comstock section, as well as of California and eastward. We ship our best beef, and use the rest in the way of home consumption. That’s business, of course, yet let it not be understood that we do not have a few choice steaks and cuts of the very best ourselves, while also assisting in working up or eating up the poorer stock. We have six butcher shops, employing about twenty men, ten horses and half a dozen carts, to slaughter and distribute the beef to some 2,500 customers, who are supposed to chew or otherwise consume this beef. Every shop makes a good showing of beef and each and every one is provided with a good sausage-chopping machine, which is kept busily employed. There is probably more tough beef chewed, naturally or artificially, in Eastern Nevada than anywhere else on the Pacific Coast. If this were not thus, how could six butcher shops be supported in a little place like Austin?

Nimrod is mentioned as a mighty hunter, among the ancient sports, and no doubt he did very well in his way, and in his day and generation, but he would be considered rather tame and commonplace among the hunters of this section, so far as duck or goose shooting is concerned. J. A. Wright, one of Austin’s best shotgun manipulators, went down to the Humboldt river the other day, seeking what birds he might slaughter before the game law should prevent him. He went to one of his favorite haunts, some sixteen miles above Battle Mountain, and for three days luxuriated among a perfect affluence of fat ducks and geese, and armies of sandhill cranes, with necks and legs as long as fence rails. He was joined at Battle Mountain by Dunn, Sprigg and other congenial sports, and they killed about a car-load of game. They had a boat, and sailed, waded and swam, as they saw fit. Wright says they were fairly overrun with game, and merely shot all they wanted. He thinks no other place in the world can equal it.

Spykens is apparently doomed, so far as the widow McWinzle is able to doom him. She will not leave the poor fellow alone, but now insists that he must have an autograph album, in order that she may fill it with autographic poetry. She has the following delicious morsel toSpykens as a starter for the album he was going to set up for himself:

May your manhood’s voyage be bright,

And ever with fair wind said

Is the hope of

Spykens is of a very romantic, musical disposition, and has employed his surplus talent and time “picking dump” near the Paxton incline for the last year or two, but this poetry business of the widow makes him nervous. He thinks he shall have to go prospecting somewhere as soon as the weather gets warmer. 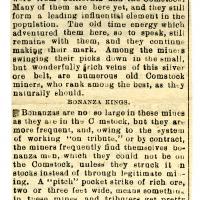