And now here it is the morning of the day when Wiggins' big storm was to break loose and devastate the whole country with sweeping tornadoes, cloud-burstings of rain, fierce thunder and wild leaping electricity. Yet the predicted visitation cometh not, and the Spring-like weather continues as a reproving mockery to the ambitious prophet. But he gives until the 13th, next Tuesday, for his calamitous prediction to come to pass. The telegraph says that he has succeeded in frightening the Down-East coasters, and not a Marblehead or Gloucester fisherman will venture out of port until the prescribed limit of time for the Wiggins trouble is past. In the next three or four days the codfish and the halibut will roam unmolested amid the dark rocky recesses of the ocean bed, with no calamitous or clam-baited hooks to tempt or make them afraid. And Wiggins himself, having recklessly staked his reputation as a prophet on this unpleasant prediction is no doubt anxiously watching the skies and the weather signs in ardently hopeful expectation. He wouldn't mind being blown a mile or two, struck by lightning and crippled for life if his dire prognostication would only come true, and vidicate [sic] and establish him as a true prophet. But the chances are that he will not have the supreme, selfish satisfaction of saying “I told you so," but will be ignominiously consigned to oblivion as a ridiculous failure, like old Mother Shipton and similar prophetic frauds of times past. Those Down-East fishermen should take him out and throw him overboard, like Jonah, as feed for some dyspeptic whale. Wiggins' failure as a prophet may be attributed principally to the weather. Meanwhile Lydia Pinkham continues to placidly smile through the newspapers, and the old world rotates regularly as usual.

The mill of the Manhattan Company continues grinding right straight along, and grinds exceedingly fine, its present run, which commenced on the 30th of October last, being one of the longest and most lucrative it has yet experienced. About every other day it sends forth its regular shipment of silver bullion - ten bars, worth $1,000, or more, each. The average of the ore crushed at the previous run of the mill, last Summer, yielded an average $350 to the ton. The ore of the present run is not quite as rich, but there is more of it, and mines showing and developing better and more extensively than was anticipated. The monthly pay-roll of the company is about $23,000, employing many miners at the regular rate - $4 per day - and the tributers are generally doing well. The mining and milling operations and other business matters of the Manhattan Company are exceedingly well managed and judiciously conducted in every respect. Notwithstanding all this apparent prosperity, however, there is much grumbling about hard times. This complaint comes principally from the business men. They openly declare that although their customers have plenty of work at good pay, they do not come forward and square up their accounts as they should. The tributers, especially, they say, run long credits and big bills, and cannot always be depended upon to cash up. When they are in bad luck, they naturally are not expected to pay. Meanwhile, good paying customers have to make up for the poor ones, otherwise the storekeepers would soon necessarily be bankrupt. This idea or principle is not new, however, here or even on the Comstock.

The veins being only a few inches wide or thick, it does not pay to extract or work any low grade ore, therefore rock that yields $300 or $350 per ton under the stamps is about on a par with $30 or $40 ore on the Comstock. Some of this ore, however, runs as high as $1,000 or $2,000 and over to the ton. Nobody cares to fool away time getting out $100 ore; and base metal ores are carefully left for future reference or posterity. The general character of the ore worked is of the ruby or antimonial silver variety, containing little or no gold, and some specimens of it, to be seen in the numerous mineral cabinets about Austin, are the most beautiful imaginable; in fact not to be excelled, or perhaps equaled, on the American continent.

Many of the original locators and developers of the mines are here, yet, and many of them will die and be buried here. Your genuine Reese River pioneer is decidedly a peculiar character. He was a pioneer of California as well, therefore was among the first to join in the rush to “Washoe" and soon after to Reese River. He never was able to shake off his old California miner style, and would rather live in a cabin and work at “chloriding” or “tributing" for himself, at merely living rations than to work for anybody else for good, regular wages. Therefore it is that he is found working “on tribute” or contract in these mines to-day, for of course he sold out his old locations or was frozen out of them long ago. He still goes out in the hills prospecting occasionally, but the whole country has been so closely scoured over and investigated that his new discoveries are exceedingly rare. Old Jim Sloggers, who is a standard member of the Society of Reese River Pioneers, and who declares that he was with old Reese himself when he discovered Reese river, is the most inveterate of them all. Whisky could not kill him, but has only preserved him, as it were, and he frequently swears that when he dies the worms in the little graveyard below town will go on a three months' Jamboree. The fine, Spring-like weather of the last few days stirred up the old fellow's ambition and he went prospecting over about Yankee Blade. Yesterday he came home and got drunk.

"Struck it again!" roared he as he tacked ship and stood his course up street, stopping every few rods to shake hands with sympathizing friends, and tell them about it. “Struck bulliest kind o‘ chloride, richer'n Limburger a foot thick, betcher ribs."

“Glad to hear it, Jim, and now see that you hold on to a good thing for once in the way, and don't let anybody euchre or freeze you out of it.”

“Ha, Ha! Freeze me out, hey? Git ahead of old Jim Sloggers some more, will they? Not much. Got ‘em this time. Located the whole dam racket myself, and goin’ ter work it myself. Hain’t got no thievin’ partners this time, and don't want none. I'm the only damsonova ---- in it.”

Then the old boy went ship, and beat to windward for his little cabin on the hillside, chuckling occasionally as he felicitated himself on that last proposition.

Colonel Dave Buel was among the first of the Reese River pioneers. He laid out the townsite and built the first mill. The town was named after his partner, Alvah C. Austin, a native of Plymouth, Massachusetts, who was here with him, but who is now a partner in the Miners' Foundry, San Francisco, and resident of that city. By the way, Jack Williams, the famous desperado, so well remembered in the early days of the Comstock, and who was assassinated one evening in Pat Lynch's saloon, on B street, as a so from Plymouth, Massachusetts.

Our returned legislators from Carson have been very busy the last two or three days standing the congratulations of their numerous friends, and are gradually simmering down to private life once more. They speak well of Carson, and say they were well treated there and allowed to get away with their trunks. The only thing that worried them, in the way of legislation, was the railroad proposition, and that they found worse to solve than the grindstone problems in the ENTERPRISE. 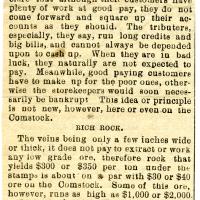