During the last three or four days the Chinese have been holding some more high festivities, and what it is all about is not given for ordinary white barbarians to understand. Sam Gee says "it's pooty big time" in his country, “allee same Fourf July." Anyhow, they have exploded numerous fire-crackers, bombs and all that sort of thing, and the noisy Celestial band has played itself into a complete state of exhaustion. It is evidently a sort of musical festival, or, perhaps, as Murphy suggests, they are practicing for St. Patrick's Day.

The opposition daily newspaper, the Democrat, still continues to exist and circulate. Austin never was in condition to support two dailies before, and is not now. John Booth, of the Reveille, always apologized for not running a larger paper, by saying that it was of no use trying to run a forty-column paper in a twenty column town; yet, here we have two twenty column papers running in full blast. The chances for profits on either paper, are, however, correspondingly small. Some people thought the Democrat would stop circulating directly after the close of the late political campaign, but it still circulates. Perhaps, its occasionally changing proprietors manage to financially make both ends meet, and keep it circulating as the crane did the eel. It remains for time to decide whether Austin can support two papers, or that it shall simply result in the survival of the fittest.

Austin being the oldest town in Eastern Nevada, and never having been thoroughly swept by an extensive or obliterating conflagration, the general architectural style of the houses partakes considerably of the primeval and original. There are many very neat and commodious residences, one hotel, three churches, the County Court-house and the Masonic and Odd Fellows' Hall building, a two story brick; but the generality of the houses are small but comfortable. This never was a good country for lumber, therefore the first settlers who came with rush consequent upon the discovery of the rich silver mines here built their houses of adobe, brick or stone, and they made them only large enough to live in, for building material was scarce and labor dear. These little seven-by-nine dwellings are to be found throughout the town, and are yet among the most substantial and comfortable. They are considerably improved and added to, however, each forming a nucleus for multiplication or many additions. Whenever a new child was added to the family a new room was built on to the side or rear of the house, and the present size or census of the oldest families are thus easily computed by counting the number of rooms or additions to the house. The main or original house being small, and not lofty, these wing additions have their roofs pretty flat, therefore low ceilings predominate, and most of the houses have a rambling, depressed, spread out appearance - like an ambitious old hen trying to set on an unusual number of eggs. Some of the most interesting of these original houses are the little "stockade" cabins. These were built of small logs or poles, stuck on end, with the interstices chinked or plastered up with mud. The roofs were covered with sagebrush and mud, and some so remain, although most of them have been reroofed in a more acceptable and Christian-like style. These relics of the old times are interesting to contemplate. But you cannot drive a nail into those old logs or the lumber made from them anymore than into an anvil or millstone. They are of the nut pine or cedar growth of the early days, and are now seasoned as hard as a miserly bonanza man's heart.

The citizens of Austin are generally of a friendly, social nature. Everybody minds his own business, principally, and as much of his neighbor's as he sees fit, and there is very little fighting or quarreling, all being disposed to be orderly and law-abiding. A little over a year ago one man shot and killed another in the bar-room of the hotel. Before morning his fellow-citizens smashed into the jail and hanged him by the neck in the front doorway of the Court-house. The Sheriff was thus saved trouble, and the county some expense, and even the victim said he supposed it was all right. There has been no trouble since. The county officers are the flush men, financially, but they are not selfish. They lend their salaries to whoever asks them, and when they want money they borrow some. The ladies dress elegantly, some of the poorest, homeliest and most illiterate wearing the costliest goods. Generally speaking, however, they average and compare very well with other communities, in the way of good looks, social agreeableness and practical common sense. The young ladies are all good looking, without any exception.

The chances are that we have the steepest plain railroad in the world here in Austin - that is to say, the steepest in practical daily use. From the terminal depot of the Nevada Central Railroad, at the mouth of the Canyon, about half a mile below town, it winds around and up the grade, passing directly up through the center of the main street to the Manhattan mill, at the upper end of the town, a distance of about two miles. It is a narrow-gauge, and the grade or ascent is one foot in eight - over 600 feet to the mile. This is almost like passing up Main street, Gold Hill. The grade of the Virginia and Truckee Railroad, from Carson river to the Comstock, is 116 feet to the mile. That of the southern Pacific, at Tehachapi, where the recent terrible disaster occurred, is 105 feet to the mile. A small but very powerful dummy locomotive, weighing 33,000 pounds does all the transportation work over our street railroad, hauling two flat cars, loaded with six cords each of heavy nut pine, or two box cars, loaded with general merchandise, at a time in nice weather like this. In Winter, however, when the track is slippery, one car load at a time is enough for it. This locomotive is a very neat bit of machinery, enclosed by a wooden covering or cab, upon each side of which is printed in big letters its name, “Mules’ Relief." And this is a very appropriate name, too, for eight mules used to have a very tough, wearisome pull to navigate a single car load up from the depot aforesaid before this lively, unflinching and never-tiring little motor came to their relief.

It is pleasing to know that our sapient legislator at Carson have concluded their labors and gone home. And it is more leasing to know that they did so little harm during their allotted term of service in behalf of the State and their fellow citizens. There were some very good leading men among them, men of ral [sic] natural talent and legislative ability. In fact as a whole they were better than the average Nevada Legislature. For this reason it was that they did so little harm, and in reality some real practical good. Especially were they harmless in the matter of railroad legislation, just as practical observer of the situation expected of them. The first part of the session they did little practical work, but, like all preceding Legislatures merely passed away the time, getting ready to do something. The result was a press of work and delayed bills at the latter end. All the bills they had on hand when they got through they can pass over to their successors, the Legislature of two years hence, giving that body something good to start in on. Especially in the way of railroad bills. 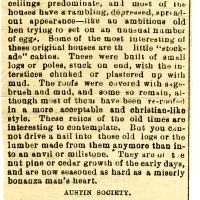