Saint Valentine's Day came in as a sort of wind-up to the Chinese New Year festivities, and was further complicated with the commencement of Lent. One circumstance operated as an offset to the other, however, to some extent. The Chinese had their big dragon flag flying all day, and the Jews danced at the grand ball given by our German citizens in the evening, but the good Catholic Christians stayed at home, under the restraints of Lent. The average American Austinite, however, tried to make a festive day of it. A violent snow-storm gave about eight inches of splendid sleighing, and in the afternoon and evening, numerous gay cutters and spanking teams were dashing about the streets. The ball was very well attended and much enjoyed, every person present receiving a valentine, besides having lots of social fun. The Post office did a huge business, especially in the forwarding and exchange of cheap, wicked and acrimoniously exasperating valentines. Schoolboys got even on their teachers by sending them the meanest and most soul-harrowing of these cheap missives, and many a reflective citizen slyly sought grim satisfaction for past or existing grievances in the same way. And it is of no use saying that these villainous pictorial exaggerations do not hit strongly or have any effect. One hard business man received three, apparently from different persons, but all three were alike. He stood over an hour before a looking-glass, swearing that he had no such nose and ears and did not love money to the extent so aggravatingly set forth in those horrid valentines, and then he went and got drunk.

The autographic album epidemic is more annoying and permanently distressing than the mumps. I’ve young or old miss in Austin has at least one of these nefarious concerns, and they are afflicted with an abnormal desire to get them filled up autographic remarks and names, quantity and number being apparently the main object in view. Thus, for one autograph of any note or prominence they have forty never heard of before, or likely to be even remembered for any length of time. The young gentleman of unfortunately high popularity among them naturally falls an easy victim to general desire for his autograph, and the way they pile the little albums in upon him is really oppressive. Where he fails is in attempting to sling a verse or two of poetry into each of them, instead of simply recording himself "Yours, eternally, J. Bilkington Boggs," or something after that style. Many persons, too, seem to be saturated with the idea that they can write themselves into prominence through the mediumship of these autograph albums, therefore they go for them, and seek to improve the glorious opportunity. The result is that the whole motley assort­ment, from the two-bit affliction up to the $3 pictorial atrocity, gets filled with more bad penmanship and still worse spelling than any other style of registry in the English language. And they will so exasperatingly slop over into the poetics and try to do the sublime thing, with their expressions pointing heavenward, like the tail end of their demented pens. For instance:

Among the holy Angles may you forever sore

When from this Worldly earth you part forever more.

Your sincere friend and vell visher.

Dear Maggy: Our friendship has budded

Temporarily on Earth. May it blossom out

Perminently in heaven. Yet While through

Some of them remain on earth and talk glibly about birds, flowers, cottages, the wild sea waves and other human realities and possibilities, but the whole proposition is simply a willfully delusive, pleasant little humbug

The natural congealing of water pipes in Austin, Virginia, Gold Hill or any other leading points in Nevada constitutes a public calamity whenever and wherever it happens to occur. You get your water supply from the Sierra Nevada, and we get ours, here in Austin, from the bosom of the Toiyabe range. It matters not where the water comes from to fill the pipes which supply the town, however, so long as it does not freeze in the pipes. But it does. Men who go to church have felt compelled to swear about it, and even women have felt profane, although they said nothing - aloud - when they twisted the domestic faucet unavailingly. At times this Winter, Austin men have felt compelled to drink whisky, beer or similar beverages from lack of water. They really did seem to miss it.

That peculiar disease, plurally designated as the mumps, continues to be peculiar to Austin, and the favorite complaint of her citizens. Its chief merit is its impartiality, afflicting the mature as well as the juvenile citizens. In fact the youngsters have come to regard it as a sort of maturing or finishing touch to manhood. The present Austin boy feels unhappy and discouraged unless he has had the mumps, or has promising hopes in that direction. He gazes admiringly upon the swollen joles of his old "Pop," and exults in the prospect of soon catching the same or worse himself. He will consider his manhood properly evolved and secured only after he has had the mumps.

The Democratic wing of our legislating Salons at Carson is unfortunate in being arbitrarily hampered and instructed by platform resolutions, as well as by the general expression of their party, to assume and maintain the aggressive against all the railroads, whether such action shall be right or wrong. Hence their fecundity in the matter of hatching out bills to regulate and reform railroad matters. They have gained much new light on the subject since bringing their legislative brains to bear upon it, and know more about it now than those who concerted the platform resolutions for their guidance. They cannot very well see how they can overhaul and regulate the railroad situation to the most satisfactory advantage, but they feel obligated to make some sort of a showing in the way of railroad bills. The safest idea, under the circumstances, consists in presenting bills that are unconstitutional and therefore sure to be defeated, or which are essentially similar to others which have failed in previous Legislatures. Then they can very plausible, lay the defeat to the overpowering, mercenary Republican majority. The Republicans are not quite so badly hampered, being simply bound by their platform resolutions to demand from Congress wholesome and effective legislation on the subject, and also to adopt “such a course of enlightened legislation as will extend to railroad and all other corporations doing business in this State the same rights before the law as are accorded to individuals - no more and no less.” They are expected to regulate and equalize freights and fares on all railroads within this State, but they are also expected to study well the true interests of the State, as connected with railroad matters, and to take no action against railroad progress and development which shall work material injury to the future prosperity of the State and its people. As to platform pledges or dictation, it will be borne in mind that both parties in the Legislature are thus absolutely pledged to provide for a Constitutional Convention to revise the State Constitution, instead of trying to amend it themselves. They have the same right to ignore their platform pledges or instructions on the railroad as on the Constitution propositions. That's about the size of it, as viewed from a Reese River standpoint.

It is gratifying to know that Government has ordered 5,000 worth of rations to be distributed to the Piutes of the northern border of this State, who were reported to be in a starving condition. So long as there is no "reservation” jobbery and interested manipulation in the matter it is all right. There has been too much of that already, and in that direction. The Piutes in other sections of the State never complain of suffering and starvation. Here in the Reese River section, they flourish and multiply finely. There are some hundreds of them living in and about Austin, and they are all fat and comfortable. The squaws do a little washing and housework, and the men chop wood. In this way they manage to keep themselves well clothed and blanketed, and they can always pick up enough food among the whites. In fact, they all have their regular eating routes, so to speak, which they go over every day or at stated times. If they get nothing at one house they are likely to get something at the next. They never refuse to eat, if it is forty times a day, and what they cannot eat they take home to their campoodies on the hillsides. In the Fall they lay in plenty of pine nuts, and they also improve their time in that way during the fishing and hunting season, generally taking a trip down on the Humboldt about that time. Colonel Charley, with his wife and pretty black-eyed daughter Hattie, returned recently from a two-months’ visit to the Sink of the Humboldt. They came home in fine condition and brought several big sacks full of ducks and geese, all frozen solid. Charley was regarded as a bonanza man by his fellow-Piutes at first, but he has had bad luck at poker the last few days and has but few ducks and mud hens left. But he and his will never starve so long as there is fish, game and pine nuts in the country and second-hand grub in the kitchens and slop barrels of the whites. 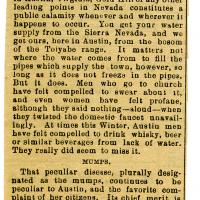