He has been here, and he has gone away again. Like a brilliant comet with a fiery tail he arose on our horizon, culminated in true rocket style, and went down similarly. He came in on the "buckboard" from Reno—23 miles—in an hour and 31 minutes, and retained vitality enough to lecture the same evening. He gave four lectures, commencing with a $217 house, culminating the second night with a $350 house, and ending the fourth night with a $130 house. As he freely stated to his audience, he had half the gross receipts of the house for the four what he was talking to them; and his half for the four nights amounted to just $374.75. George is a very sensational man, and has a very large brain, very unevenly balanced. He has a heap of good sense, though, and I liked very much to hear him talk. No mountebank lecturer ever did half so well in that line. He knows his business well, and plays his character for all it is worth. Like Emperor Norton, or Uncle Neddy Coombs when made up for Washington, George Francis has a peculiar individuality; there is but one George Francis Train in the world. A greater gaspipe, humbug, charlatan, blatant demagogue, and self-righteous Pharisee never existed in the world; he is unadulterated sounding brass and ineffable cheek personified. But, then, you San Francisco folks know all about him.

As soon as he arrived, he issued his manifestos, in the shape of handbills, scattered broadcast, telling what he was going to do, threatening especially to crucify and totally annihilate the Bank of California, wipe out their little private railroad between here and Carson, and do many other terrible things. Well, he did nothing of the kind. The Bank still exists, and the railroad progresses toward completion, just as though George Francis Train never existed. He in fact said nor did anything that anybody can remember or feel; therefore all he said or did amounted to just his $374.75, which he got for it. He is simply a first-class star actor of the truly original and entertaining character of George Francis Train. The Britishers did not appreciate him as we do, or instead of putting him in prison as a dangerous political agitator, they would simply have shut him up in a lunatic asylum for a while. A fair and impartial study of the man, however, compels me to acknowledge him to be more of a knave than a fool. He is a shrewd, calculating Yankee, adopting the eccentricity style as the most profitable, and he makes it pay. No, the man who calls George a d—d fool, can fight me; I stand up for him every time.

The Smartest of Them All.

The smartest man in the State of Nevada is William Sharon, Esq., in his personified embodiment as Agent of the Bank of California. He better could possibly be selected. He knows his business, and thoroughly attends to it. He earnestly desires all true influence, whether of stationary or floating character, to be exercised for the benefit of the institution which he so faithfully represents. Therefore, whenever a man comes here of prominence in the nation, or whose influence for good or evil, he thinks is worth propitiating, Sharon goes after him, heading off everybody else. Thus he got the first location in the Ways and Means Committee, Colfax, and the other Government notables, who have been here recently. He took complete possession of them, treated them, made them sleep with him, showed them all which it was proper for them to know—who sustained the country, who owned it, what it would be without the Bank of California, how to take snuff out of the heel of an old boot, how to go into the house when it rains, and many other awful points of information. They left properly impressed. The very softest snap of them all was George Francis Train.

The very evening of his arrival, when he dashed through C street on the buckboard, with the pony of the rival express just ahead, and waved his hat and bowed so acknowledgingly to the crowds lining the sidewalks, under the fond delusion that it was a grand popular ovation in honor of his arrival, instead of being the usual crowd of spectators gathering every evening to see the racing expresses come in. That very evening, before he had got the dust of the road shaken off, Sharon called on him at the International in a sort of incidental way, and made his acquaintance. He located him; he secured him, and before George was aware of it, Sharon had genteelly polished off all the rough corners from the terrible missiles he had prepared to launch forth against the Band of California. At every one of his lectures, George Francis announced what slaughtering, damaging crushers he was going to thunder down upon the Bank; and all its enemies were there with their long ears expectantly open; but, ah ! the spell of the enchanter was upon him, and if George's terrible stinger was sharp and effective, nobody could see the ;point as far as hurting the Bank was concerned. He ate oysters with Sharon, drank soda with him, rode about with him, and ran all night with him at the high-toned ball Sharon got up for his special delectation at this private residence. The dazzled George felt good, and the more Sharon ticked his big bump of self-conceit, the better he felt.

The next night was to be his last lecture, so he gave Sharon and all his friends free passes to come in "dead head" to the show. The result was that fifteen of the Bank of California passed in free, greatly to the disgust of Piper, who thought he ought to have $6.50 out of them as his share, honestly believing in the good old adage, that "those who dance should pay the Piper." Wiegand, too, our popular Gold Hill assayer, who had prepared a beautiful little $40 silver brick, covered with an appropriate inscription, and presented it to the marvelous George, was there also, and didn't ring in "dead head" either, although he also had a pass, for his peculiar conscience wouldn't allow it; so he had the jolly pleasure of sitting there in the dress circle and having George Francis acknowledge the receipt of that desirable bullion brick from a "Mr. Wingard."

Well, George had announced in his bill that this evening he was going to give his "parting kick at the Bank of California;" but people had begun to know him a little, so he had a slim audience. He didn't kick the Bank at all—not much—but, on the contrary, stood up for it and the Carson Railroad and Sharon, like a major. It was a "great cry and little wool." I am George's friend, and will do him the justice to say that his lectures were exceedingly entertaining, and everybody who attended got their full money's worth in one shape or other. He left yesterday noon for Salt Lake, where, if he talks about woman's rights as he did here, Brigham will cave his head in for him.

George Francis Train says our mines are worked out, and that a financial crash will in consequence overwhelm us in about six weeks or less, but we all bet leave to differ from his inexperienced sapiency in that matter. All along the Comstock the mines are looking more promising than for months past, and before next spring a largely increased bullion yield will prove what I say to be true. Bullion tells better stories than George Francis Train. Stocks are low now, but that makes no difference; they will be high enough next spring.

The Yellow Jacket is turning out the usual amount of ore from the south mine. The north shaft will be cleaned out in about three weeks sufficiently to allow of working in the 700-foot level once more, and just as soon as a winze can be sunk from it to the 800-foot level a huge body of rich ore will be opened, and the present bullion yield of that famous mine more than doubled.

The Hale & Norcross yield is increased to 100 tons per day, the repairs being completed, so that ore is once more being hoisted from the lowest level. The 300 and the 175-foot levels also yield well, and a winze being sunk below the fourth station level is in a streak of $60 ore three or four feet wide.

The Chollar-Potosi yields about 225 tons of $50 ore per day, mostly from the old Blue Wing stopes. The Grass Valley and New Tunnel sections are also showing good ore improvement both in quantity and quality.

The Kentuck gives an increased yield of excellent ore, but nothing good is yet developed in the Crown Point.

The Overman shows a gratifying increase of production, yielding now at the rate of nearly fifty tons of $25 ore per day. This is high grade ore for that mine, as it contains immense bodies of the low grade article which will be brought into paying requisition at no distant day.

The Occidental pays very well and after its regular established style. The lower tunnel is nearly into the ledge and from present indications will tap it within a week or so, as the face shows more quartz, and occasionally a little ore. This tunnel will strike the ledge 400 feet deeper than the present lowest workings; therefore great expectations are justly indulged in as to what it will develop.

The Sierra Nevada is getting along finely, as usual, both mine and mill, and a run of excellent ore is now being made which will doubtless yield better than usual. The second clean-up for the month will be made to-morrow or next day..

The Murphy and Mack Minstrels will return from Salt Lake and reappear at Piper's Opera House on the 1st and 2d of next month, and the Martinotti's will be here on the 6th. They will draw crowded houses. ALF. 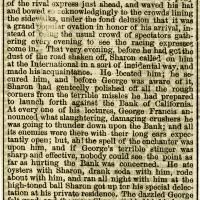