Within the last few weeks or months quite a mania for base-ball has afflicted our young men of Virginia, and the natural consequence was the formation of a base-ball club. They have been assiduously practicing as often as possible and had got so proficient at the game that they fondly imagined themselves as little if any inferior to the famous Red Stockings. They felt a little diffident about going down and beating the California Nine, or even of inviting the Red Stockings over here to be vanquished, so in order to branch out easy they thought best to make a descent upon Carson first and wipe out the Silver Base-Ball Club down there. So they sent a challenge which was accepted, and yesterday they chartered a fine four horse conveyance and away they went in gallant style. They were met at Warm Springs by the hospitable committee and treated to a cocktail and a good breakfast, and when the play came on in the afternoon in the presence of hundreds of ladies and gentlemen, they were beaten handsomely; only scoring 31 to the Carson boys' 82. They skulked out of town the best way they could without attracting too much observation, and came home as quiet as sucking lambs. They will not challenge the Red Stockings, but judging from what the telegraph tells us about the result of the base-ball match yesterday in San Francisco, they would just about be a match for your badly beaten boys.

Sutro has broken ground, or about to do so, in actual commencement of his great tunnel from Carson River to the Comstock ledge. Sutro made a big talk at Piper's Opera House last Monday evening and had it printed, therefore no doubt you have read it already and therefore know all about it. Sutro did far better than I had thought him capable of doing, and I could not help thinking as I listened, "Verily, Sutro, thou reasonest well." Sutro made a most able effort, and the way he did pitch into the California Bank was jolly to contemplate. Literally, "The Assyrian came down like a wolf on the fold;" he gave them particular fits. To the initiated, however, it was simply a matter of spite toward the very capital which would once have assisted him and carried him through in triumph, had he availed himself of its assistance promptly and rightly, but he was too dilatory and let the golden opportunity slip past, no more to return. I have done the best I know how, at all times and on all occasions, to aid and abet Sutro's great project, as absolutely essential to the future working of the Comstock ledge, and having done so, without fee or reward of any kind, I am perfectly at liberty to state my opinion regarding it That tunnel, or something similar to it, will eventually be run, but by more ability and capital than Sutro can command or influence at the present time. Should I be wrong in this opinion, however, and he should finally succeed, I shall rejoice in his success, for he will well deserve it.

The new mill of the Lady Bryan Company is just completed, and started into operation at 10 o'clock A. M. to-day. It consists of two batteries of five 750 pound stamps each, four of McCone's mammoth pans, working 5,000 pounds at a charge, and two huge settlers, ten feet in diameter by three feet deep, together with all the requisite pulp tanks and other fixtures and appurtenances usually to be found in a mill of that capacity. The machinery, propelled by a horizontal engine with 12 inch cylinder and 35 inch stroke, rated at 34 horsepower, but which is easily run up to over 60 horsepower if required. One of the largest sized Blake's rock breakers reduces the ore to about the size of walnuts and less, and the batteries are self feeding. The working capacity of the mill is about 30 tons a day. It is well housed in; everything is of the most substantial order, and taken altogether, I look upon it as the best mill in the State. It is situated close by the mine, so that the ore cars are run directly to the batteries, and the requisite water for the use of the mill is supplied form the mine itself. In the ravine below the mill there is a splendid chance for blanket sluices, and other arrangements for saving tailings, and it is estimated that the ore from the mine will be milled by this new mill for less than $5 per ton. There is no expense for hauling, and the ore is extracted from the mine for $3 a ton. Besides what is crushed by the new mill, sufficient ore is extracted to supply the Empire State mill, about a mile distant, of the capacity of 30 stamps.

This valuable mine is situated in a ravine near Six-Mile Canon, some three miles from this city and consists of an immense ledge of silver ore nearly 300 feet wide, running north and south, and dipping east at an angle of about 45 degrees. It has been worked with varied success for several years, but it is only within the past few months that the real regular pay streak has been found and fully developed. This is about twelve feet wide and extends from the surface down as far as worked. Some of the ore is very rich in green chloride as well as black sulphurets of silver, and also fine gold, but the general average may be set down at from $30 to $40 per ton. The present principal workings are from the surface down to the 80-foot level, although the shaft is 90 feet deeper below that, or 170 feet deep, and the pay streak is found to extend to the bottom. It is proposed to commence in about a week to sink the shaft 200 feet deeper. The yield is about 60 tons per day at present, employing 30 miners, exclusive of carmen, engineers, and other employees. There is no water to contend with in the present workings. The main drift at the 80-foot level is extended south about 75 feet from the shaft, showing still better ore as it proceeds, and 80 feet north, but here the ledge appears broken; a winze, however, sunk there 30 feet in depth develops excellent pay ore, rich in free gold. With the present showing of good ore, mining and milling facilities, there is no reason in the world why the Lady Bryan should not be paying regular dividends soon.

The Belcher is yielding some 20 tons of excellent ore per day, principally from the 335 foot lead, averaging from $30 to $160 per ton, with an accumulation of 500 tons on the dump. The Kelsey Mill, however, which commenced running on it day before yesterday, will soon reduce that pile.

The Yellow Jacket yields 160 tons of ore per day from the 800 and 900-foot levels of the south mine. The north shaft is at last cleared of its long accumulation of mud and water, and the truck floor of the 700-foot level was reached last Tuesday. That level is being cleaned out, and the shaft prepared for hoisting ore, which will be commenced in about three or four weeks; meanwhile, a wine or raise is nearly completed from the 800 up to the 700-foot level, through which ore will be hoisted, and which will add immensely to the ventilation of the entire mine.

The Chollar-Potosi yields 180 tons per day, principally form the Blue Wing section. The New Tunnel section shows an increase of still better ore. The latest average assays of the mine are over $45 per ton.

The Hale & Norcross yields 145 tons per day. The various breasts at the lower levels give an excellent showing, and the upper levels also yield well. The repairs to the shaft are completed, and the sinking deeper for the 1,100-foot level progresses satisfactorily.

The lower level of the Gould & Curry shows nothing encouraging as yet. The old upper workings yield about as much.

The new shaft of the Virginia Consolidated is 335 feet deep to-day, and the hard blasting rock is encountered, which rather impedes progress.

The Sierra Nevada never looked better, or in fact, as well. An enormous amount of excellent pay ore is developed in both the car track tunnel and at the surface workings, and the mill is steadily grinding away on the second run of the month, which is expected to turn out extra good. Everything in and about the mine or mill is under the best and most efficient arrangement.

The Occidental lower tunnel has cut into the ledge another some 30 or 40 feet, but the pay streak is not yet reached, although the indications at present are excellent, and good assays are obtained. Owing to the sharp angle at which the tunnel strikes the ledge, development is necessarily slow, and they may have to run 100 feet further in length before getting into the pay streak.

The fire is still thought to be burning in the Gold Hill mines, although it is blockaded in tightly, but considerable of that same gas still leaks out, indicating fire. It is evidently working upward, as of late miners have been able to get into the 700-foot level of the Crown Point mine to a considerable extent. No ore continues to be yielded by the Crown Point, neither is there anything encouraging yet developed at the lowest levels, where the most recent explorations in the ledge for are have been made.

Rev. S. B. Bell delivered a lecture on "Man, and Woman, too," at Piper's Opera House, to an audience of 33 in the dress circle, last Tuesday evening. The chief merit of his lecture was its originality. The Fakir of Vishnu will give four sleight of hand and magical performances there during the coming week, commencing to-morrow evening. John Piper is in your city now after more attractions. I understand he proposes to bring up a melodeon company. The weather is fine. ALF. 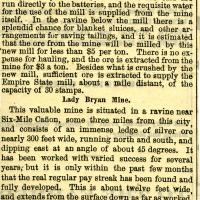