Either this has been an extraordinary good season for little fiddlers, or else there has been an unusual exodus of them from all parts of the world, for they certainly have appeared here in marvelous numbers during the last few months. Here they come, little girls and little boys, and the way they do torture that sacred instrument, the fiddle, is a caution to Ole Bull. I never knew till now how small a boy could play the fiddle, but having seen several little exiles from Vesuvius and other Italian volcanoes, travelling the county, playing on fiddles bigger than themselves, I conclude that there is no limit to their capacity. Little bits of boys and little bits of girls invade this section with fiddles, travelling about the streets from one saloon, store or dwelling house to another, and will insist on giving you a tune or so, whether you like it or not, fully expecting you to disburse a bit or so therefore, anyhow. And they do murder poor "Captain Jinks," slaughter "Champagne Charlie," climb over the "Flying Trapeze," and devastate the "Grecian Bend" in a manner debilitating to contemplate. Organ-grinders this season have been limited exclusively to those travelling with maimed soldiers, and the entire amount of vagrant music is monopolized by little fiddlers.

The railroad between here and Carson, misnamed the Virginia and Truckee Railroad, is not progressing very fast in construction at the present time. Considerable grading has yet to be done, but as the iron for the track will not arrive for six or eight weeks yet, Sharon & Co. have concluded not to push things too fast, but to wait awhile and so save the use of the money. They have taken off the hands employed on the last tunnel near Virginia, which can be finished in a week, and during the next three or four days will discharge 600 Chinamen and over 200 white men. It will not require a very large force to complete the grading. The track-laying will not be done so fast as one the great continental railroad, as there are no straight lines worth speaking of, but most of the rails will have to be curved. It is the crookedest road anybody ever saw.

Adolph Sutro, the famous projector of a certain tunnel between Carson River and the Comstock ledge, is here. He is trying to put his grand project through now, by means of small subscriptions from miners, or anybody else who will take small or large amounts of the stock. That is his best chance of success now, as for interested reasons, the capitalist are averse to investing in it, regarding it with an unjustifiable degree of jealousy. This tunnel certainly is a very important work, and would be a great advantage to the country. Through it to Carson River is less than four miles, straight track, and the tunnel once completed, cars could be run backward and forward regularly, regardless of snow, rain, or any other vagary of the elements, at all seasons of the year. It would also tap the Comstock mine hundreds of feet deeper than the present lowest workings, and afford the best possible drainage. Sutro has fought against all manner of discouragements for a long time, but that tunnel will eventually be run whether Sutro has anything to do with it or not. You can just chalk that down as a settled point.

Day before yesterday I paid a visit to this famous "outside" mine. I was all through it six months ago, but considerable development has been made since then, and I thought it required another critical inspection. The lower working level, 600 feet from the surface, has been extended several hundred feet further north—1,200 feet in all. The extreme north end of the main drift show the same continuous sheet of ore so prevalent and unbroken throughout all other parts of the mine, and so characteristic of it. "Raises" have also been made to the extent of sixty feet above this new work, simply developing the same thing; in fact, this mine is practically inexhaustible, there being now enough ore in sight to last for many a long year to come. It is all low grade ore, but pays very evenly, is extracted cheaper than any other in the country, mills easily, containing little or no base metal, and yields a small profit to the ton. The yield of bullion is simply limited by the amount of ore worked. About forty men are employed in and about the mine. The body or vein of ore is in one continuous, unbroken sheet, from two to twelve feet thick, extending from the croppings at the summit of the hill, 600 feet down to the 600 foot or lower working level. Winze sunk 250 feet below this develops merely a continuation of this ore, but it is found to be somewhat richer as depth is attained. How far it extends northward is not of course known at present. No assessments ever have to be levied, the mine being a self-sustaining institution, paying for all prospecting, improvements, etc., and the day is fast approaching when the Occident will occupy a prominent position in the front rank of dividend-paying mines. I base this opinion upon actual observation of the present developments, and the new measures progressing for opening out new facilities and putting the mine in still better producing shape.

The tunnel of which I have heretofore made mention as being run from the ravine down below the ore dump of the mine, to strike and open the ledge 400 feet beneath the present lowest working level of the mine, is progressing very well, being steadily worked by six men on eight-hour shifts, two men on a shift. The rock, however, is very hard, so that they can only make about a foot in twenty-four hours on the average. A contract was let yesterday to run the tunnel fifty feet further, which will probably carry it to the ledge, as there is every indication that it is close to it, and judging from the "feeders" or stringers of quartz encountered within the last few days, it is apparently in the foot wall of the lead. Both giant and black powder is used in blasting. This tunnel is a little over 1,000 feet in length, and within the last few feet, a material change in the character of the rock is noticeable, also indicating the ledge to be near at hand. Great anticipations are indulged in relative to what will be developed by this tunnel. Some weeks ago a fine stream of water was tapped, which has settled down not to about fourteen inches. This is made to turn a water-wheel at the mouth of the tunnel, driving a fan, which, by means of a long tube, supplies fresh air to the farthest end of the tunnel. The water, after serving this purpose, is then led in a small flume around the hillsides and supplies two or three mills at or near Silver City. Everything connected with the Occidental mine is under excellent and fully competent management, therefore, it has a perfect right to be a success.

The north shaft of the Yellow Jacket will be rid of water, mud, etc., in about two weeks longer, when an incline will be opened from the 700 to the 800-foot levels, and the extraction of ore will be commenced. The south part of the mine is yielding as usual. The present assessment of $10 per share became delinquent on the 18th instant. I hear it hinted that another similar assessment will be levied as soon as it can be legally done, as the expenses have been in excess of the receipts for some time past, and still are so. That probably will be the last assessment, for the good ore in the north mine will make things all right as soon as it can be got at advantageously.

The Chollar Potosi shows an improved yield at present; about 230 tons per day being extracted; average assays, $45 per ton. The new shaft where the hoisting works were burnt is being repaired and put in order for future use. The Sierra Nevada mine is progressing excellently, as usual, and the mill is pounding away on another run of extra good ore. The next clean up, at the last of the month, will be a highly gratifying one.

No ore is developed as yet by the drift east in the lower level of the Gould & Curry mine from the seventh station. The old upper workings yield about fifty tons of $40 rock per day.

The repairs to the Imperial-Empire shaft are nearly completed. It was badly caved between the 1,000 and the 1,100 foot stations, but is nearly all solidly re-timbered, both sinking deeper and drifting southward will be resumed shortly.

The new shaft of the Virginia Consolidated is to-day 245 feet deep, and excellent progress is being made, the rock being of a very favorable character. It is the best piece of work in that line I ever saw, the timbering being especially well done. Thoroughly practical workmen have that job in hand, and are putting it through energetically.

The Belcher mine shows a great degree of improvement generally during the past two or three weeks. A good body of ore over 100 feet long and five or six feet wide is developed near the south line above the 300 foot level, assaying over $100 per ton. A contract is let to run the 850 foot level 100 feet farther south.

The fabulously rich new Silverado is not in so good repute here as it was, from the fact that the greater part of those who joined in the rush for there last fall and spring have got back; and even the latest arrivals during the past week all agree that White Pine is a bursted bubble, and for true, substantial merit is no more to be compared to Virginia or Gold Hill than New Jersey is to California. They all tell of hard times and great scarcity of money out there, and express themselves delighted to get back to old Washoe. White pine will doubtless be a good country next year, but it isn't now.

George Francis Train will show at Piper's Opera House, commencing Tuesday evening next. How many lectures he will give will be limited and regulated by his first successes. If he gets cabbaged and rotten-egged the first night, he will have crowded houses for a week. The Murphy & Mack Minstrels are doing a fine business at Salt Lake, and are to be back here, to perform at the Opera House, on the 1st and 2d of September. The Martinettis are coming on the 6th, and will draw crowded houses for ten nights or more. Lotta will probably come next, and Elise Holt about the last of the month; so you see we will not lack for good theatricals over here in the land of the sage-brush and the silver-brick.

A couple of Piutes got into a quarrel on South C street, yesterday forenoon, all just because one of them had run off with the other one's wife and daughter. The Mormonish culprit was fiercely collared, but fearing the police, further demonstrations were desisted from, and both agreed to go out in the hills and fight it out. They went to a secluded spot, and inside fifteen minutes tore each other's shirts completely off, when both expressed themselves satisfied and threw up the sponge. 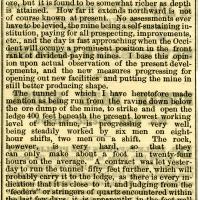