No Credit to be Robbed.

What's the use of being robbed or murdered unless you have the sympathy of the public with you? Now, William Weir, the bacon peddler of whom I made mention in my last letter as having been robbed at American Flat, about a week ago, of over $1,200, and everything else worth stealing he had about him, can't get anybody here to believe a word of it. This skeptical community have their own opinion in regard to the matter; so have the police. His story didn't hang together right, and he didn't act just as a man who has actually been robbed always does. Worse than that, when he went back to California and found by the papers that people over here didn't believe he had been robbed, he at once, in a fit of virtuous indignation, went before a Justice of the Peace and made an affidavit that he really had been gone through with by foot-pads, just as we described in the HERALD. If he hadn't sworn to it, there was a chance of folks believing that he truly had been robbed by highway-men, but this affidavit spoiled the whole. It is rough enough on a man to be robbed, without having to swear to it afterwards. Robberies hereabouts, especially on the divide between here and Gold Hill, have been a little too frequent and fashionable, for general and indiscriminate belief. We have seen too many who having lost their coin, etc. "bucking against the tiger," were ingeniously inclined to attribute their loss to some other cause, and in fact make foot-pads on the divide a convenience in the matter, when in reality they came to a divide less irregularly; Mr. Moore, of Gold Hill, who was relieved of his watch, and $23 in coin, a week ago last Thursday night, I honestly believe to be the only case of genuine highway robbery on the divide, occurring this season, and shall continue to believe so unless he swears to it.

The railroad between Virginia and Carson, owned and being built by the Bank of California, and misnamed from interested motives the "Virginia and Truckee Railroad," is rapidly being pushed towards completion. The longest tunnel on the route, that near American Flat, about 600 feet in length, is about finished, and that through Fort Homestead and Gold Hill soon will be. The grading being so nearly completed, the tracklaying will soon commence, and the chances are that the cars will be running over it before October. It will be used principally in transporting ores from the mines of the California Bank to Carson River, for cheaper crushing; and how much actual pecuniary benefit it is going to be to the tax-paying people of Storey county remains to be seen; although county bonds have to assist in building the road unless the people should open their eyes some day and repudiate that part altogether. Well, hurrah for the railroad anyhow.

Dan Castello's "Circus, Menagerie and Abyssinian Caravan" has been here. I have seen it, and so will you soon. It performed two nights here, and to the largest houses ever seen in this section. There were nearly or quite 3,000 people present the first night, and about half that number the second night. It could not have raised a paying house the third night. The plain truth, as your readers will see, is, that the thing is terribly overrated. The "caravan" part is a fancy little humbug, and the "menagerie" is confined to a smart elephant, a mangy old camel, and five cages of strange animals, consisting of three little Asiatic lions, some monkeys, a leopard, a pelican, a zebra, a hyena, a harte-buck, a little white bull and two or three other odd things. As to the circus part, that is pretty fair, only consisting of the performing elephant, one or two very good trick ponies, two excellent riders, two or three pretty fair tumblers, no gymnasts or acrobats, a dish balancer, a cannon ball tosser, and not a single individual new feature. It is simply a third-class, charging first-class admission. It disappointed public expectation here sadly, turning out to be literally a "great cry and little wool."

During the past week the Yellow Jacket mine has flourished exceedingly, with marked improvement in every respect. An increased number of men were employed, and nearly two hundred tons per day of ore were extracted. The air, owing to better ventilation facilities, is pretty good in the north mine. The old hoisting works over the north mine are put in complete order, and started hoisting water from the north shaft last Thursday noon. Considerable repairing and fixing is being done to the shaft, therefore, the water, which is 300 feet deep, will not be gotten rid of under two weeks at least. The winze connection will be made, as soon as possible, from the 700-foot level, where the bottom of the shaft is, to the 800 and 900-foot levels, giving the best possible draft of air throughout the mine, besides opening up extensive bodies of excellent pay ore.

Nothing new and interesting developed in the Crown Point; it still produces no ore. The Kentuck is yielding a little from the upper levels as usual, but preparations are being made to work it through the 900-foot level of the Yellow Jacket, beneath where the fire is still burning, and deeper than it was ever worked before. This is a most excellent arrangement, well acted upon.

The Belcher folks are still drifting about in the bowels of their mine with good prospects, but raising no ore. The Overman produces enough ore to pay expenses, with the aid of an occasional assessment.

The Imperial Empire shaft requires, and is receiving rather more extensive repairs that was anticipated. It will take a month yet before it will be in good fix for work. Meanwhile, neither sinking nor drifting at the lower levels is being done. An assessment of $5 per share, aggregating $20,000, was levied on the Imperial last Thursday—delinquent, August 18th.

The Chollar-Potosi yields nearly or quite 250 tons of ore per day, and is looking well, except at the lower levels. At the annual election of the company, held last Monday, all the old officers were reelected. The number of shares of the capital stock were increased from one share to the foot to ten.

The Hale and Norcross looks healthy throughout, especially at the lower levels, and yields something over a hundred tons of ore per day. About fifty feet of the shafting is being repaired, which rather impedes the ore production at present.

The Savage Company are also repairing their shaft. No new or important developments in the mine. At the annual election of the Company, held last Thursday, all the old officers were reelected, with T. B. Shamp, Superintendent.

The broken shaft of the Gould & Curry pump engine is repaired, and the water in the mine, which had risen to the height of 325 feet, is all pumped out again to-day. Drifting east from the Seventh Station will be re-commenced forthwith.

The Virginia-Consolidated new shaft was 138 feet deep last night, and forty-eight feet farther would carry it to the level of the Latrobe tunnel, which passes within a few feet of it. The rock works easy and over five feet of the shaft are completed per day on the average.

The Ophir west drift has penetrated 425 feet from the shaft at the 700-foot level, with no material or important change.

The most flourishing and profitable mine on the whole Comstock ledge at the present time is the Sierra Nevada. It costs less than $7,000 per month to run both mine and mill, and the monthly yield is over $20,000 on the average. The first clean up for the present month was made day before yesterday. The bullion is not yet refined and assayed, but in quality it is at least fully up to the average. The mill is working away again after its regular old style on the second run of the month, and the huge surface deposit of rich ore shows ample inducements to believe that it will hold out for years. I hear it intimated that the next monthly dividend will be a considerably increased one.

Morris Gregory, the young actor, is now recovering from a five weeks siege of the small-pox in this city. W. W. Hutchinson died at Gold Hill with this disease, day before yesterday. These are the only cases I know of it, hereabouts.

The referees of the late firemen's tournament in this city yesterday decided to award the big silver prize trumpet to Young America Engine Company, No. 2, as the victors in the hose carriage race. That company don't like the idea of their having been outsquirted on that occasion by Eagle, No. 3, which machine now wears the champion badge, so they have slug out a challenge to squirt for from $2,500 to $5,000. The Eagles flap their wings defiantly, and reply with a county challenge for smaller amounts. Much is said about various sized nozzles, "give and take," "Open butts," and all that sort of thing, but a match is sure to come out of it. There's fun ahead. 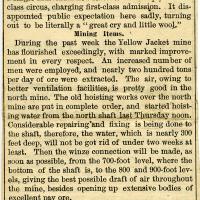