No More of It.

Since the pretended robbery of William Weir, a couple of weeks ago, things have been pretty quiet in that line, even rumors of those illegal transactions being scarce. People now begin to breathe freer, and travel over the Divide between here and Gold Hill again same as they did before, with renewed trusting not being waylaid and robbed by muffled brigands, armed with Colt's revolvers and double-barreled shot-guns. Indeed it is now pretty generally believed that nine-tenths at least of those many rumored robberies on the Divide, during the past five or six years, are humbugs, got up by sensationally-minded individuals, just for a little cheap notoriety. Nearly a year ago, one adventurous foot-pad was reported to be waylaying stragglers at that point, directing his attention to Gold Hillers returning home from Virginia late in the evening. Thus John Kromer stated that the fellow stopped him and relieved him of two dollars and fifty cents, all the coin he had left after a jolly cruise about Virginia. Two or three evenings after that another man said that that foot-pad had stopped him and gone through him for a dollar and six bits. Now, allowing these two stories to be true, that miserable brigand was doing an extremely poor business—not making whisky money—and I really was inclined to believe them a little from the fact that shortly afterward that poor devil, or some other equally unlucky burglar, tried to get into Hazen's brick store on the Divide, probably hoping to finger a safe full of money. He broke into a blacksmith shop first and got a crowbar and other tools to operate with, and then worked hard all night prying off the iron shutter of a rear window. He dug away the brick work about the hinges, and after much severe exertion, managed to pry the shutter loose. Then he smashed out the inner window and came face to face with about 1,600 tons of barley, in sacks, piled square up before him. He laid down his tools and left in utter, hopeless disgust, and has never been heard of since. Had he succeeded in entering the store he would have found no safe or anything else worth stealing—except barley.

The latest sensation we have had in the theatrical line, was the "Carter Dramatic Combination," which appeared at Piper's Opera House last Tuesday and Wednesday evenings, having just arrived from the East, per continental railroad. The "Combination" consisted of Mr. Carter and his wife, and they opened with "Lucretia Borgia." Mrs. Carter did Lucretia finely and Carter himself did Gennaro and all the rest of the characters, rendering them very creditably, too. Just let Barrett and McCullough, and all your other comparatively one-horse tragedians or comedians, take a back seat after that: there's talent and concentrated versatility for you. He did work most industriously, and by dint of rapid changes of dress and constant doubling, with considerable stretch of the imagination allowed to the audience, he contrived to represent the full cast of characters in that noted five-act tragedy. Carter is certainly a genius as well as a good actor, and his wife is really a second Mrs. Bowers in Lucretia Borgia at least. They advertised themselves very parsimoniously; therefore they had a slim house. The second night they were actually going to tackle "Ingomar," with Mrs. Carter as Parthenia, and Carter personating Ingomar and all the rest of the skin-dressed barbarians in that popular piece. The idea, however, was a little too whimsical for our critical theatre-goers, and so the combination had only a $20 house. He refused to play to so small an audience, and told them he didn't think Virginia people properly appreciated true talent when they saw it. Next night, at Dayton, he refused to play to an audience of four, and the next night another mean little audience discouraged him at Carson. Mr. and Mrs. Carter are probably at San Francisco by this time, where success as members of some good dramatic company awaits them. They simply failed here in trying to speculate too heavily on too little capital. George Francis Train will be here shortly, to appear at the Opera House. Next comes Tom Thumb and wife, with Commodore Nutt and Minnie Warren, and after that something else, probably, to this deponent at present unknown.

The burning of the fine new hoisting works of the Chollar-Potosi Mining Company, and the extensive buildings connected therewith, last Wednesday morning, was the liveliest sensation, in that line, this city has experienced for a long time. It was a little the quickest fire I ever saw. The employees in and about the works were drilled as a regular fire company, with plenty of hose to attach to the pump of the steam engine at a moment's warning, and the alarm was given as soon as the roof, about the smoke-stack in the boiler-room, was discovered to be on fire; but notwithstanding all these precautionary arrangements, the whole thing went as though saturated with camphene. In just exactly half an hour from the time the fire commenced, the whole big building was destroyed, and the frame fell in. Our efficient firemen, with all their excellent machines, could do but little good, except in saving some of the dwellings near by. The entire loss to the company, including the large three-story boarding house near the works, a large amount of timber four hundred cords of wood, etc., is estimated at over $100,000. The amount of insurance was $40,000. Most people were under the impression that the destruction of these hoisting works would interfere with the working of the mine and the extraction of ore, but such is not the case at all. The ore comes from the upper levels, through the old Chollar works and the Potosi tunnel. The new shaft and works were simply used in deeper prospecting and explorations. There were only four men working below, drifting at the 500 and 900-foot levels, and they made their escape by climbing down the ladders of the pump shaft to the 1,100-foot level, and out through the 1,080-foot level of the Hale & Norcross mine, by means of the drift connection made about five weeks ago. These works will probably not be rebuilt at that point, as the shaft was sunk too far west; consequently had passed through to the west wall long ago. It was always a heavy bill of expense to the company, and no particular advantage. They should not sink a new and better shaft, some hundreds of feet further east, down the hill or else combine with neighboring companies in doing so. None of them have sunk far enough east.

An increased number of men have been worked in the Yellow Jacket mine during the past week, and over two hundred tons of ore per day extracted. The air in the south portion of the mine is better, and daily becoming more so. The winze connection between the 800 and 900-foot levels in the north mine, of which I have heretofore made mention, was completed last Monday, giving good air throughout both drifts. There is an immense body of good pay ore in that part of the mine, which will be got at shortly. That 300 feet of water in the north shaft is being slowly reduced by means of a couple of one hundred gallon bailing tubs. The shaft requires a great deal of fixing, and about forty feet of it, some three hundred feet below the surface, will have to be retimbered. When this water is all out, the shaft repaired throughout, and a winze sunk from the bottom of it at the 700-foot level to the 800 and 900-foot levels below, which will be in two or three months from now, you may look for prosperous times in the Yellow Jacket and a corresponding elevation of the stock. At the annual meeting of the company, held at Gold Hill last Monday, J. B. Winters, Wm. Sharon, D. Driscoll, T. G. Taylor and T. B. Storer were elected Trustees. This new Board then elected J. B. Winters President and Superintendent, F. F. Osbiston Secretary, and Bank of California Treasurer. They voted to donate $2,500 to the sufferers by the great mining calamity and levied an assessment of $10 per share on the stockholders. This assessment aggregates $240,000, and, added to the dividend of $5 per share declared just before the fire and subsequently rescinded, it amounts to the same as an assessment of $15 per share, aggregating $360,000, and aggravating stockholders considerably. They will have to grin and bear it, though, anyhow. They'll be all right in the fall.

Nothing new in the Crown Point. No good developments at the 1,000-foot level, rather an unpropitious circumstance for prospects at the 1,100-foot level when it shall reach the ledge. The upper levels of the Kentuck yield as usual,, and the opening being made into the lower part of the mine, below the fire, through the 900-foot level of the Yellow Jacket, is developing an extensive body of good pay ore.

Nothing new to report in the Overman, Belcher, Imperial-Empire or Bullion. The Chollar-Potosi yields over 250 tons per day. The shaft is still undergoing repairs.

The Gould & Curry yields between forty and fifty tons of $36 ore, from the old workings of the upper levels, daily, with a prospect of an increase in a few days, when the second-station drift is cleared out. Drifting east through the ledge at the seventh station was resumed last Sunday, and good progress is being made.

The Sierra Nevada mill is running steadily on pretty good ore from the surface workings of the mine, and another good clean-up will be made on the 31st, the second one for the month. The amount of this rich ore already developed is fully sufficient to keep up the present highly gratifying monthly receipts for some time to come. Both mine and mill are well managed, and run at a low rate of expense, far within the receipts, allowing a healthy state of finances. Like the majority of the mines along the Comstock, the Sierra Nevada shows little or no pay ore at the lower levels at present, but the upper levels pan out rich.

The new shaft of the Virginia Consolidated is down to the level of the Latrobe tunnel to-day, 164 feet from the surface. The work is being well and energetically prosecuted by Ross & Co., the contractors for the first 500 feet. They run out the excavated rock and earth through the Latrobe tunnel and will continue doing so till the shaft is about sixty feet deeper, using a windlass, when they will get their steam hoisting apparatus at the surface into operation.

The drift west of the ledge at the 700-foot level of the Ophir is to-day 462 feet in from the shaft. No more favorable indications are encountered. The rock works well, and good progress is made.

The Occidental is yielding as usual from the upper levels, and the new tunnel, 400 feet beneath the present lowest working level, is progressing well, the rock in the face being somewhat softer and more favorable.

The Lady Bryan has a good showing of pay ore, especially at the lower levels. The annual meeting of the company will be held August 3d, in this city. 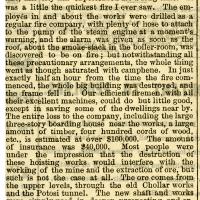