The grand celebration of the Fourth here by the Miners' Unions of Virginia and Gold Hill, and foreign born citizens generally, passed off admirably. The procession was a good long one, and with the Emmet and Sweeney Guards in the lead, and a good band of music, it presented a very neat and gratifying appearance. They marched to Gold Hill and back, and through the principal streets to Piper's Opera House, where the Declaration of Independence was read, and other appropriate exercises observed. The great feature of the day, however, was the firemen's tournament on C street, of which I gave you the programme in my last. The champion badge for the farthest throwing was won by Eagle Engine Company, No.3. The jumper race for a big silver trumpet was very warmly contested, but owing to some irregularity or misunderstanding, the prize was not awarded, and it was decided by the judges that the race should be run over again to-day. It did not take place, however, to-day, therefore the matter remains undecided.

The "road agents" are at their old tricks again, hereabouts. Only last Thursday night, about eleven o'clock, a Mr. Moore, of Gold Hill, was stopped by a muffled brigand on the Divide, while on his way home from Virginia, and robbed of his gold watch, worth $250, and twenty-three dollars in coin. About nine o'clock last evening William Weir, a dealer in hams and bacon who arrived in town a few days since from the Sacramento River, was stopped by three men at the junction of the two roads just beyond the Overman mine, on American Flat, and relieved of $1,236 in cash, a breastpin, and whatever else he had about him worth taking. He was mounted, and at once rode to Virginia and informed the police. They at once started out, and a couple of hours afterwards arrested three men whom they thought looked suspicious. They resisted, and therefore got used rough. They were taken to the station-house, but were subsequently released, there being no tangible evidence against them. No other arrests have been made.

Matters with the Yellow Jacket look livelier and more prosperous at present than at any time since the terrible calamity of three months ago, and if that infernal, long-continued fire was only out, things would go on most swimmingly. As I described in my last, the very fair artificial draft of air has been created throughout the 800 and 900-foot levels of the south mine, and last week an increased number of men were put to work, extracting ore at the rate of nearly 150 tons per day. The repairs and refitting of the old hoisting works over the north shaft, are about completed, and they were started up yesterday afternoon, for the first time in a little over a year. The reels are being turned off now, and to-morrow the hoisting of water from the shaft commences. There is about 300 feet of this water to raise which will be done in a very lively manner by means of huge tubs with valve bottoms. When this water is all out, a winze connection will be made from the 700-foot level, where the bottom of the shaft is through to the 900, giving a grand and perfect circulation of air through the entire mine. Large quantities of good ore will also be taken from this old north mine, which is far from worked out. As I stated in my last, the fire was supposed to have burnt out, therefore, it was thought best to reopen the closed drifts of the Crown Point and Yellow Jacket. Accordingly, last Wednesday, the barricade in the 700-foot level of the Yellow Jacket, about 100 feet north of the shaft, was removed thus opening direct communication with the burnt district. A heavy stream of foul gas immediately started out, continuing day after day. Friday afternoon the 700, 800 and 900-foot levels of the Crown Point were similarly reopened, and the effect was shortly perceivable in a large increase of gas through the Yellow Jacket, which soon was accompanied by smoke, and got so bad that Saturday morning the miners were driven out, in fact several were brought out asphyxiated and fainting from the effects of that terrible gas. As soon as possible the 700-foot level was closed again, and the men were enabled to return to work. The reopened levels of the Crown Point were also closed again before noon; the fact that fire and plenty of it, still exists in the east ledge above the 800-foot level, being satisfactorily demonstrated. How long that fire will continue to burn, the Lord only knows. Being hemmed in, and fresh air excluded as much as possible, it burns slowly like a charcoal pit. It has burned already over three months, and may for many months longer. It took nine or ten years to put all that timbering into the bowels of the earth which is on fire now; but it is to be hoped it may not take that length of time to burn out.

The drift east at the 1,000-foot level of the Crown Point mine, has passed through the ledge. Some very good streaks of ore are encountered, but no extensive rich bodies. A greatly decreased quantity of water flows from the level, consequently drifting east at the1,100-foot level below is not so much impeded, but progresses very well. The Kentuck is getting along about the same as when I last wrote, taking enough out of the upper levels to supply the Sunderland and River mills. The reopening of the drifts sent a little gas among the miners yesterday morning, but it is all right again now. One man was made a little sick, that's all.

The Overman yields between forty and fifty tons of fair grade ore per day, and is in a tolerably flourishing state. At the annual meeting of the company, held at San Francisco last Thursday, the following officers were elected: Trustees—M. J. McDonald, David Fay, A. Hemme, Louis Vessaria, W. K. Parkingson; Superintendent—J. A. Myrick; Secretary—Thomas J. Owens.

Sinking deeper in the Imperial Empire shaft is discontinued, in order to make necessary repairs to the timbering of the shaft. The old upper working of the Imperial still continues to yield about fifty tons of good ore per day, but the quantity in sight is limited and cannot hold out many months longer. The drift south toward the Holmes ground is considered certain to strike the extension of the good body of pay ore in the North Yellow Jacket, which dips north. Both the Imperial and the Empire have been in bad luck for some time past, but it is to be hoped the present new administration may develop something good.

The Savage seems to be rather weakening of late, the yield diminishing month by month. There is plenty of low grade ore in the mine, but of the high grade article, which tells the story on the bullion product, only about 8,000 tons are estimated to be in sight—vastly less than was estimated at this time last year. Considerable repairing is being done to the shaft at present. Strong hopes are entertained, by sinking deeper, of being able to strike a continuation of the same good body of ore existing at the lowest level of the Hale 7 Norcross.

The Hale & Norcross. Still flourishes healthy and strong. The upper levels yield small quantities of good pay ore, but the heavy body of rich ore at the lowest or 1,030 foot level holds out better than ever, and bids fair to extend to the center of the earth. The late dividend of $6 per share aggregates $48,000.

The Gould & Curry yields about fifty tons a day from the upper levels. Owing to the breaking of the shaft of the pump engine, a day or two since, the water has raised about one hundred feet above the seventh station, where the drift east through the ledge was being commenced.

The second regular monthly dividend on the Sierra Nevada was payable yesterday. It was only $2.50 per share, and could just as easily been made $10, but the controlling powers very wisely think best to retain a plentiful surplus in the treasury to lay in the winter's stock of wood, timber and stores which, and still maintain the regular monthly dividends. A surface tunnel north of the hoisting works will develop an unexpected continuance of the rich ore existing at the level above, and which is now being run through the mill. A considerable amount of free gold specimen ore is being daily encountered, and this month's run will evidently be even better than the last. At the meeting of the stockholders, held in San Francisco last Thursday, it was decided to increase the capital stock of the company to $3,000,000, to be divided into shares of $200 each.

The Chollar-Potosi is looking exceedingly well throughout, and yields about 230 tons of ore per day with good prospects of increase both in quantity and quality.

The Ophir west drift is to-day in 422 feet from the shaft, and the rock encountered bears an improved appearance, as though the ledge was not far off.

Young America hereabouts, and all the Piutes, little and big, are agog with expectation, and pregnant with brilliant imaginings relative to Costello's grant "Circus, Menagerie, and Abyssinian Caravan," which appears here Tuesday and Wednesday evenings. The tent must be a stunner, for they couldn't find a level scrap of ground here to pitch it on without going down by the Gas Works, away below town. They say it covers a whole acre of ground. The Piutes will see an elephant for the first time—a couple of them—a little one and a big one. 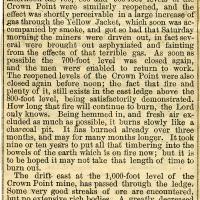