Cheerily peals forth the sweet church bells, and a portion of our cosmopolitan population are wending their way toward the several houses of worship. The ladies are all dressed to their prettiest extent, and although not tricked out in Grecian bend and similar styles of ridiculous fancy so prevalent in more fashionable communities, yet they all look neat and attractive. We have got better looking ladies here, on the average, than you have in San Francisco. The little girls, too, with slim legs and clean white stockings, short frocks and skirts that stick out starchily all around, and neat little hats, with gay ribbons, go switching pertly along together, each with a juvenile parasol held rigidly at a particular angle, regardless of which way the sun shines. To be fixed up this way once a week constitute some of the most important and pleasurable eras of their dear little lives. The men, too, have got their best clothes on, but they don't all get to church. Those who go with their wives generally make the trip, but bachelors and those who go it on their own responsibility are less reliable. Man of them really do start for the church, but can't get past the brewery, especially on a hot day like this, when the most moderate and least excitable thermometer in town indicates 85 degrees in the shade. Men will draw unfavorable contrasts between a dry sermon in a hot, uncomfortable church, when politeness and a sense of religious duty obliges them to stay, whether they like it or not, and a seat at ease, with genial companions, around a gallon of cool lager. The breweries win the day. A very lively game is also in progress at an Irish hand-ball alley, not a pistol shot from where I am writing, and the loud shouts and laughter of the excited players commingling with the church bells pealing. Away down in the bowels of the earth, beneath the very streets and house of Gold Hill and Virginia, hundreds of men are busily toiling by the dim light of candles, amid the drifts and subterranean chambers of the silver mines, toiling for the support of those very churches and their precious congregations. The sound of their picks do not mingle with the church bells ringing; neither do thoughts of them and prayers for their safety enter very often or too largely into the head of the well-fed parson, as with stereotyped devoutness and sanctified attitude he supplicates the Thorne of Grace from his fine pulpit. Should, ball player; sing away, ye holly brewery revelers; blow, steam whistles; rattle, buggy wheels; tune up your fiddles, ye hurdy house musicians, for your evening's work. All these are the evidences and accompaniments of civilization and Christianity. Peal on. Sweet church bells, peal on.

Kennedy, the Scottish vocalist, appeared at Piper's Opera House last evening and the evening before. His entertainments, consisting of song and story, tale and ballad, principally of a Scottish nature, are very good indeed, and attract excellent audiences. He closes to-morrow evening. Wilson's Great World Circus performs at Gold Hill this evening and at Washoe City to-morrow evening. It succeeds well wherever it goes. It will be in this city again on the 3d, 4th and 5th of July. Anna Dickinson lectures at the Presbyterian church to-morrow evening before a very large and fashionable audience. Subject: "Nothing Unreasonable." Mrs. Augusta Mina St. Clair lectured, evening before last, at Gold Hill, on the interesting subject of "Whom Shall I Marry?" and last evening her subject was, "My Southern Tour." She did not have large audiences. She is advertised to lecture in this city to-night on the subject of "Woman as Maiden, Wife, Mother." Mrs. E. F. Keach, the well known actress, takes a grand complimentary benefit at Piper's Opera House next Thursday evening. From present indications she will have a crowded house. Anna Dickinson has gone fishing. She and a whole crowd of other pleasure seekers from here and Gold Hill went over to Lake Tahoe yesterday. She will be back in time to lecture to-morrow evening, most likely.

Matters relative to the Crown Point, Kentuck, and Yellow Jacket mines, remain about the same as when I last wrote, as far as new developments of ore are concerned. The drift east at the 1,000-foot level of the Crown Point, has penetrated the west ledge, but nothing satisfactory is developed. They expect to strike it rich in the east ledge when they get to it. All the old hands are discharged, and none but strangers are working in that level, so as to keep all knowledge of operations and developments, at this important point, as far as possible from outsiders. This is not easily done, however. The drift below at the 1,100-foot level is much impeded in progress by the great amount of water encountered, keeping the pump and a 260-gallon cage tank constantly going. Yesterday afternoon, while raising this tank full of water, the crank of one of the hoisting engines broke short off, causing the immediate smashing out of both cylinder heads. Fortunately no one was hurt or scalded. The tank was eased back to the bottom of the shaft without injury.

The Kentuck yields about fifty tons of ore per day, supplying the Sunderland and Pioneer mills. Forty men are employed in the mine at the upper levels. This is only about half as many men as used to work in that mine before the fire, which is still burning.

The Yellow Jacket, which, three or four weeks ago employed 400 miners, now employs only about 60. The air was so hot and foul in the mine, owing to lack of ventilation, that human fresh and blood could not stand it, even on eight hour shifts. Men were continually fainting and being brought out. One of the last laid three hours, insensible, before he could be revived. Jim O'Donnell, the foreman of the mine, was reinstated day before yesterday morning, and Kellogg, who for the last seven months has held that position, is discharged. O'Donnell was foreman for seven years, until Kellogg was put in his place. He is confining his operations to the north mine exclusively, and in three or four days will secure better ventilation by means of a winze connecting the 800 and 900 foot levels. Another winze will also within three weeks connect these levels with the 700 level and bottom of the north shaft, thus affording full and free ventilation throughout the north mine. The old hoisting works over that shaft are being thoroughly overhauled and renovated, and in about thirty days will be running. Before that time the bullion products of the Yellow Jacket will be small; indeed, good, prosperous working may not be looked for under two months. By that time it is to be hoped that the south mine may become available again.

The Imperial-Empire shaft looks extremely discouraging at the bottom. It is 1,160 feet deep, and now develop nothing but hard, black porphyry, with no quartz worth speaking of. The only hope appears to be in the expected good body of ore to be developed in the old Holmes ground, by means of the south drift, which has penetrated 140 feet from the shaft. It will reach its destination in six or seven weeks.

A few days ago an important drift connection was made between the 1,100 foot level of the Chollar-Potosi and the Hale & Norcross 1,030-footlevel. This gives a very powerful draft of fresh air through both mines, a most inestimable blessing to all miners. The current is from south to north, the surface of the Hale & Norcross shaft being higher than that of the Chollar-Potosi. Both mines are in healthy condition and yielding well. The same may be said of the Savage. It is looking exceedingly well throughout.

The Sierra Nevada Company will make their second clean-up for the month on the 30th. The yield for last month was the best ever known in the history of the mine, but that for the present month will be better still. The figures will not be far from $25,000. Another dividend will be declared in a few days. As the entire expenses of the company, including mining, milling, salaries, and everything else, are less than $8,000 per month, it is easily seen that dividends are a natural consequence. The mine and mill, and the general affairs of the company, are exceedingly well managed.

The Gould & Curry yields about fifty tons per day from the old upper workings. The deeper sinking of the Bonner shaft is discontinued, as it has gone through the ledge entirely, and into the west wall. The seventh station is being opened for a drift east, through the ledge, to see what may be found in that direction. The prospect looks dubious.

The Ophir west drift at the 700-foot level has penetrated 390 feet from the new shaft, and has at least 100 feet further to run in order to reach the ledge. It will be in rather an unfavorable part of the mine, therefore rich developments need not be too strongly counted on.

The Virginia Consolidated includes a combination of those unproductive claims on the Comstock lying between the Ophir and the Gould and Curry. The new company commenced operations a few weeks ago by breaking ground for a new shaft on a large lot they had secured between D and E streets, on the south side of Sutton avenue. This shaft is now excavated and timbered to the depth of fifty feet. It consists of two working compartments, each four and a half by five feet in the clear. It is timbered very substantially, the timbers being fourteen inches square, placed in setts four feet apart, and lagged between with three-inch plank. Ross & Co., the contractors for the first 500 feet, are doing their work in a very thorough, energetic, and workmanlike manner. This shaft is a very important one, as developing a heretofore unproductive portion of the Comstock, at a great depth. It is to be most earnestly hoped that this company may "strike it rich."

The various Fire Engine Companies in Virginia and Gold Hill are getting ready for the general firemans' tournament, which takes place in this city on the 5th of next month. Some of the machines are out pretty much every evening trying their squirting powers. One or two are out this afternoon. Which will take the champion badge remains to be seen, although many shrewd predictions are made, and every company is confident. Extensions and all sorts of contrivances are being adopted to increase the power and playing distance of each machine. There will be great and exciting fun on the grand day of trial, and much coin will change hands on the result.

This loathsome disease has entirely died out, as far as Gold Hill is concerned, and nearly so in this city. The only instance I know of its existence at the present time, is a very severe one. It is in the family of Mr. Bassett in Six-Mile Canon. The eldest son got it somewhere in this city and took it home. There are seven or eight children in the family, and they are all sick with the disease. Mr. Bassett is out at White Pine. 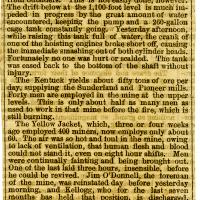