My letters heretofore have been principally dated from Gold Hill, but the two towns being so near together as to be almost one, it makes no difference particularly which place I write from; therefore, being in Virginia, I write you this letter from that lop-sided city, and will give you the principal local items of interest transpiring in both towns.

Lizzie Williams, one of the fair ones, who is in the habit of loving not wisely but too well, tried to massacre herself with a bottle of chloroform last evening, at her room on south C street. Her man, a tall, good-looking artist, saw fit to give her a jealous thrashing night before last, and the lacerations to both body and mind were too much for the sensitive Lizzie; so, after brooding over her smarting wrongs for twenty-four hours, she concluded to shuffle off this mortal coil, and in order to soothe and ease it off agreeably she went to Dan Virgil Gates' drug-store and invested in a two-ounce vial of chloroform. Then she went home to her room, and calling her land-lady, she spoke her last dying piece to her, and then tipped down the chloroform, or at least the greater part of it. It went down worse and tasted worse than third-class rot-gut whiskey, and great was the commotion created. A doctor was at once summoned, and after a severe turn at vomiting, etc., she lay panting and partly exhausted on her bed. She is better to-day, and an iced cocktail or so soothes the soreness of her throat. This is not Lizzie's first sensation in the suicide line. She tried to shoot herself a year or so ago, with a horse-pistol, but missed the mark and slaughtered a big trunk which stood near by. Then she lay down and spoke a lot of very impressive dying words to a couple of weeping friends, but suddenly thinking of her recent lover (not the present one), she sprang up, loaded a Derringer to the muzzle with grape and canister, and away she went down street to hunt him up and blow him into smithereens. He heard about her raid, and judiciously kept out of her way. Whether she will succeed in rubbing herself off the great slate of human existence next time is a matter for future items, perhaps.

In all instances the above are sad sounding, sad looking words. They signify relief, however, in some shape, and in that light were never more significant than in the case of the poor, miserable prostitute, well known in this city as Liz Hayes, who was found dead about ten o'clock A. M. to-day. She has been keeping a little, low crib on South C street, adjoining where the above-mentioned suicidal attempt took place, for the last year or two, and has been a resident of Virginia for six or seven years. Latterly she had sunk to the very lowest depths of degradation, and the effects of her career of vice, dissipation and disease was plainly apparent. During the last two weeks she has had a physician doctoring her for congestion of the brain, and for three or four days she has scarcely been able to drag her failing limbs about the house. Another woman of her class, Maria King, has been stopping wither, and says that last night, about two o'clock, as she was sleeping on a sofa in the bar-room, Liz came in from her bedroom and took a drink at the bar. That was the last that she observed of her, as she went to sleep again. A man sleeping next door says he heard the poor thing about six o'clock this morning, breathing with a rattling noise in her throat, as though suffocating, but thought nothing unusual of it, as he knew she was sick. About ten o'clock Maria King awoke and saw her lying on the floor of the bar-room, flat on her breast, with her face turned to the left, cold and dead. She at once summoned, on examination said she evidently had been dead three or four hours. A Coroner's inquest was held this afternoon. She leaves only about property enough to pay her burial expenses. I should judge her to be about thirty-five years of age. She leaves a son, twelve years old, who resides in San Francisco. Thus ends a very ill-spent life, but let us hope that the account closes forever with her death.

Nothing worthy of special note has occurred in the way of mining developments since my last writing, in either the mines of Gold Hill or this part of the Comstock. In consequence of the difficulty of securing proper ventilation, the Yellow Jacket mine is working less than 100 men, on eight-hour shifts. Human nature, even the best and rugged constitutions, cannot stand everything. The principal working is now in and about the north mine, with a view of starting up the old works, sink the north shaft deeper, and connect it with the drifts being run from the south shaft at the 800 and 900-foot levels. When this is done, the ventilation will be good, besides opening up a vast amount of good ore. The works will start up about the first of next month. The Crown Point Company are still drifting at their two lower levels, and at the 1,000-foot they are approaching near the ledge. A great increase of water is encountered, and the old hands are discharged and their places supplied by total strangers. The Kentuck is getting along slow, and a less quantity of ore is coming out. The fire is still considered to be burning in that and the Crown Point but remains hemmed in by the closing of the drifts. The Sierra Nevada Company made their first clean up for the month on the 15th instant; it yielded over $10,000. The next clean up, on the last of the month, will be far better, as much richer ore is developed and being milled.

The engagement of Fanny Morgan Phelps, at Piper's Opera House, closed last Wednesday evening. It was not a lucrative engagement either to herself or the management. Stark is still sick at the International. A grand complimentary benefit was given him at the Opera House, last evening, and entertainment being vocal music by the Choral Society, and recitations, etc., by volunteers. The net proceeds were over $1,000. Wilson's Great World Circus opens here Tuesday evening for three evenings. It will be well patronized. The circus always is. 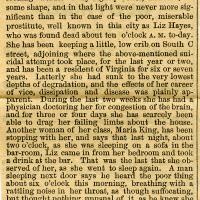