[SPECIAL CORRESPONDENT TO THE HERALD.]

Unlike the White Piners, we have no particular occasion to grumble at our weather; it does very well, and now that the small-pox has about disappeared, there is very little sickness either in Gold Hill or Virginia. Old Keyes, the Virginia undertaker, is beginning to look a little blue over it, as even fatal mining accidents are scarce now. When the small-pox was doing its worst last year, he looked jolly, and had lots to do; in fact he was of the opinion that if he could have another good season like that, he would be out of debt and all right financially.

Until that great railroad got across the Sierra Nevada the people of this section were contented with ordinary rates of travelling, but now they are not. The cars demoralized and revolutionized everybody's ideas in that respect, and ever since nothing less than pony expresses, velocipedes, and more railroad will do. The pony racing by the rival express companies from Reno to Virginia each evening on the arrival of the cars, was a very lively and attractive feature. Crowds of people lined the sidewalks to see the ponies come in, and pretty soon some sportive and excitable gents got to waiting just outside of town, on good horses, and would come trooping in like flying dragoons along with the ponies. The whole fun, however, was spoiled one evening by the city police arresting all hands, pony riders and all, for fast riding. The Pacific Union Express pony still comes in every evening with letters, but Wells, Fargo & Co. have taken off their pony and substituted a fast stage instead, which runs on a little less than pony time, bring in the mails, express and a few fast passengers, about an hour ahead of their regular coaches.

The velocipede mania came with the small-pox and is likely to leave with it, as it has very materially subsided. Some persistent chap is occasionally seen on the streets of Virginia, of an evening, industriously working his two-wheeled treadmill, sweating in his shirt sleeves as he cranks along on his wobbling way. There don't seem to be any particular use for velocipedes here, unless they would come in fashion for funerals. They would be cheap for that, much cheaper than hiring livery horses to ride out to the graveyard and back on, same as at present. Livery horses, too, always run away or get to racing on the road home, especially if they happen to stop at a brewery by the way. Gold Hill is a poor velocipede ranch, there being no level ground, therefore we can't indulge extensively.

We are getting along splendidly with that new railroad to Carson, and as I said in my last, it will be completed much sooner than at first anticipated. Money can do almost anything. "Money makes the mare go." I think velocipedes and mares differ some in that respect, however. Balloons are not in vogue here just yet.

Nothing of a very sensational nature has transpired since my last writing, in the history and condition of the mines along the Comstock, or anywhere in this section. Generally speaking, they are looking healthy and promise well.

The Overman mine still continues to yield considerable bullion, although no extraordinarily rich bodies of high grade ore are encountered at the present time

The Belcher, and the Segregated Belcher, are not yielding much ore of either high or low grade. Both are known to contain good bodies of ore, but for reasons best known to the powers controlling them, prospecting for more ore is what is principally being done at present,

The Crown Point yields no ore, but the drifts east, at the 1,000 and 1,100-foot levels, are being driven towards the ledge as energetically as possible, and in the full confidence that when the ledge is reached, rich and extensive bodies of ore will be developed. Above those levels there is plenty of pay ore in the mine, but that is where the fire is still burning, therefore, all the levels are carefully and tightly closed, in order to confine the obstinately smouldering element where it is, and keep it from doing harm outside of its limits.

The Kentuck yields ore enough from the upper levels to keep the Sunderland mill running. The lower levels are blocked up like the Crown Point, and for the same reasons.

The Yellow Jacket is being most vigorously worked, but rather at a disadvantage, owing to lack of the requisite free circulation of air, the consequent oppressive heat compelling the resort to eight-hour shifts. The ore is extracted at a high expense, therefore stockholders need not look for any more dividends for a while (unless it be an "Irish" one.

The small mines to the northward of it, in Gold Hill proper, are all yielding more or less good ore from their upper levels, but at the lower levels they have nothing developed.

The Imperial yields about fifty tons of ore per day from its upper levels. The receipts for May amounted to $43,000. Annual meeting of stockholders, June 29th. No ore whatever developed at the two lowest levels. The new shaft is 1,140 feet deep, and the bottom is in barren vein matter. Sinking deeper is being actively prosecuted, with strong hope of soon passing through the barren belt into good pay ore. They are running a drift south now, at the 1,080-foot level from the shaft, through the Empire, Eclipse, and other small claims, to the old "Holmes ground," owned by the Imperial Company, and where they will doubtless intersect the rich and extensive body of ore dipping towards it for the Yellow Jacket. The drift has already penetrated over 100 feet, and two months more will tell the story. But little water is found at the bottom of the shaft, less than above, and decreasing as depth is attained.

The Bullion Company are drifting east at their 1,400-foot level, and expect soon to strike good quartz. At that depth it is found to be very dry, with no water whatever. A plentiful supply of fresh air is furnished by the blower, from the surface.

The Chollar-Potosi yields about 175 tons of ore per day, averaging nearly $50 per ton, according to assay. The drift north, at the 1,100-foot level develops no new and rich bodies of ore, and lacks only about twenty feet of connecting with the Hale & Norcross. When this connection is made it will give a new and valuable draft of air to both mines.

The Hale & Norcross mine keeps up its lick pretty well, yielding about 150 tons per day—principally from the two lowest levels. There the pay streak is so wide that it is difficult to timber sufficiently strong to prevent caving as it is worked out. Another level, 100 feet beneath the present level, will soon be opened.

The Savage is looking exceedingly well throughout, although the receipts for May amounted to $155,100, being $18,000 less than the yield for April. This, however, was, of course, owing entirely to the grade of ore worked.

The Gould & Curry shaft, over 1,200 feet deep, has got through the vein into the west country rock. A drift east is commenced near that point, to go through to the east wall of the ledge. They ought to find some good ore in this drift if they are ever going to.

The Virginia Consolidated Company are actively sinking their new shaft between E and F streets, Virginia, but it will be many months before it will be deep enough to develop anything in the bullion-producing line at that point.

At the new shaft of the Ophir, the drift west for the ledge is now over 350 feet. The face is still in hard blasting rock, with no particularly encouraging signs developing.

The Sierra Nevada mine looks better and better every day, the continual developments of rich ore in the surface workings being far in excess of what is daily required. They are milling about forty-five tons per day now—all of it rich in free gold. A clean up will be made in a day or two, and present indications confirm me in my former prediction that the yield for the present month will be the best ever obtained from that mine.

In accordance with the advisement of Congressman Fitch, to the effect that we could send a boy from this State to be educated and trained to be a midshipman, at the United States Naval Academy, a committee of four, consisting of A. N. Fisher, C. J. Hillyer, J. C. Lewis and Wm. Haydon, have been holding an examination for the last three days in order to make the proper selection. There were ten applicants from various parts of the State, and the result was that the committee became completely nonplussed with the wonderful smartness of the boys, and simply succeeded in reducing the number down to three; and unable to decide which possesses the true qualifications for the position, they refer these three to Congressman Fitch for final decision. The following are their names, ages, etc.: Albert A. Michelson, aged sixteen years six months; residence Virginia City; educated at Boys High School, San Francisco; James Willson Blakely, fourteen years eleven months; Treasure City; student Austin Academy, Nevada; William Gifford Cutler; fourteen years, six months; Dayton, Nevada; educated at Oakland College School, California.

Fanny Morgan Phelps succeeded John E. Owens as the star attraction at Piper's Opera House, Virginia, commencing last Thursday evening. She has not succeeded very well, playing to indifferent houses and at a loss to both herself and management. Her engagement closes with a benefit next Wednesday evening, when she will have a good house, probably. James Stark and wife are still at the International, Virginia. Stark can walk about the house a little, but he has not by any means recovered from his recent severe paralytic stroke. He was paralyzed in both body and mind, and is a mere wreck, both physically and mentally. I do not believe he will ever appear as an actor on the dramatic stage again. His numerous friends in this section propose giving him a benefit at Piper's Opera House, next Thursday night. He will most undoubtedly have a very full house and a substantial benefit. After that the Opera House will close for the season, and the company so long playing there will be turned adrift on the great dramatic sea. It would be a good time for Heller, the Martinettis, or even a first-class melodeon company to come over here. No scrub attractions, however, will do at all. The best, and none other, can draw paying houses. 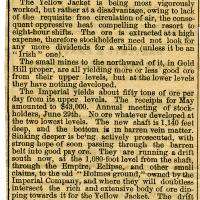