The months apportioned to the winter season are long since passed, but "now is the winter of our discontent made manifest" by some of about as mean, scandalous weather as any Christian country was afflicted with; snow, rain, sunshine, hail, squalls, big thunder clouds and blue sky, all mixed in the most exasperatingly disagreeable manner imaginable. The "oldest inhabitant," as usual, never saw the like before, although something similar in the weather line always occurs here about this time. The roads everywhere are fearfully muddy, and from Reno to Virginia the road is said to be as bad as at any time last winter, delaying the stages last evening an hour or so.

The queerest occurrence in the lightning line anybody here ever knew of happened at Lower Gold Hill last Monday afternoon, during the prevalence of a heavy thunder storm. The lightning struck the Empire Boarding house, apparently striking the ground outside first, and then coming up under the house, through the floor, exactly beneath where Mr. Frank Deville was standing. It tore a foot and a half across in the floor, throwing the splinters up to the ceiling of the room. Deville was knocked down, and stunned for a minute or so. The boots were torn violently from his feet, and even the legs of his pantaloons torn to shreds. Both feet were terribly lacerated, portions of the leather of his boots being driven into them. His surgeon has since been obliged to remove a piece of broken bone from one foot, two or three inches in length. It will be a long time before he will be able to walk. A window near him was totally demolished, sash and all, and the other windows in the room were more or less broken; his brother who was within a few feet of him was also knocked down, but not injured. Various theories having been propounded as to how this really odd flash of the lightning could have transpired, I have a right to follow suit. The floor upon which Mr. Deville stood was a double one, and he stood between a stove and a window. He was within three feet of the stove. It is a well established fact that wherever lightning meets with resistance, an explosion or something very demonstrative is the result. Hence it is quite reasonable to suppose that the electric current, attracted by the stove pipe above the roof, passed down it until finding in the body of Deville a preferred conductor, it passed through him to the floor, where meeting with the resistance occasioned by lack of a further conductor, an explosion beneath his feet was the result. In support of this idea, the upper part of the doubt floor was splintered upward while the lower part was splintered downward.

A large number of accidents, both great and small, have occurred during the past week, one resulting fatally and two others perhaps so. The first was that of Jas. Bawden, a miner, who last Friday fell about seventy feet in the shaft of the Justice-Independent mine and was so badly injured that he survived only a few hours; both legs and both arms were broken and he sustained other terrible injuries. About the same time A. J. Praedir, a Portuguese, while assisting to tear down an old reservoir in Gold Canon, just below the Piute mill, had his head badly jammed and fractured by a heavy stick of timber. He was still alive at last accounts, with but small hopes of recovery. Mrs. J. P. Cutler, who was thrown out of a buggy on South C street, Virginia, last Tuesday, while riding with her husband, by the sudden breaking of the king-bolt and consequent uncoupling of the buggy, is still alive, but having sustained a severe concussion of the brain, she was a long time insensible. Being also in a delicate condition, her nervous system sustained a very great shock, and her recovery is considered doubtful.

The Howsons concluded their very successful engagement at Piper's Opera House on Thursday evening, with a benefit, which was very fully and fashionably attended. They are going to take still another public complimentary benefit next Tuesday evening, at Athletic Hall, after which they leave for a trip overland to the Atlantic States, stopping to perform an engagement at Salt Lake. Young Siegrist, with his aerial velocipede, appeared last evening at the Opera House to the poorest audience of the season. He repeats to-night. Hartz, the Illusionist, opens at that theatre for six nights, commencing on Tuesday evening. Mr. James Stark is still confined to his room at the International, slowly recovering from his severe paralytic stroke. He can speak but little as yet, and suffers now severely from salivation. Whether this salivation will prove his salvation remains to be seen.

The subscriptions to the relief fund for the sufferers by the recent terrible calamity in the mines of Gold Hill, thus far received, amount to $10,698, of which $3,225 is from California, and the balance from the citizens of various parts of this State. As no more seems to be coming in, it is fair to presume that the generous flow has ceased. What has been subscribed, however, is fully sufficient to place all the sufferers beyond the reach of want, and even surround them with home comforts.

The shafts of the Kentuck and Crown Point were reopened last Tuesday; also the drift connecting the Yellow Jacket with these two mines, at the 900-foot level. This gave the Yellow Jacket plenty of good air at the lower levels, as there is a strong draft southward, and also sent clouds of hot, foul, steamy vapor pouring up through the Crown Point and Kentuck shafts. On Thursday the body of Martin Clooney was found in the Crown Point shaft. He was the last of the Kentuck men, and had made his way through from the 800-foot level of that mine to this shaft, where he fell a distance of 200 feet, landing on a scaffolding in the shaft. His remains were a mere mass of bones and clothes, with little or no flesh, and he was identified simply by what he wore, and his watch. The bodies still remaining unrecovered are those of Daniel O'Neil, A. Reinay and Thomas Laity—all Crown Point miners.

The Yellow Jacket is working about half its former force of men taking out ore. The Kentuck is yielding ore enough to supply the Sunderland mill. Nothing has been done at the Crown Point mine, however, in the way of extracting ore, for the air is too bad, and several men, nearly every day, have been asphyxiated by contact with the foul gas in trying to work below. They were busy yesterday laying a long wooden box, or air conductor, from the Yellow Jacket line, through the 900-foot level to the Crown Point shaft, in order to allow the Yellow Jacket a free draft of air, and yet not allow it to circulate upwards among the workings of the Crown Point and Kentuck, for from the increase of gaseous smoke apparent yesterday, It was more than suspected that fire still existed somewhere. I hope in all mercy the fire is extinguished, for it has been, and still is, rough on human flesh and blood. If it still burns, perhaps the best way would be to quit trying to mother it, give it all the fresh air and assistance possible, and let it burn itself out, and make a speedy finish of its infernal work.

I visited the Belcher, one of the most southerly of our Gold Hill mines, yesterday afternoon, in order to take a look at a new safety cage and a set of safety shaft gates they have just put in use. The cage is not made on any new principle, but the workmanship of it is the best I have yet seen in this section and highly creditable to Mr. William Bray, the head blacksmith at the Belcher hoisting works, whose skilled hand did the work. Similar cages are in use at the Crown Point, Chollar-Potosi and other mines along the Comstock, and they appear to be the most effective of any. Near the top of the iron cage frame, on either side, is a pair of oblong, or rather eccentric wheels, between which pass the heavy wooden guides for the cage, extending from top to bottom of the shaft. On the inner segment of each wheel, next to the guide, is a series of stout, sharp teeth or cogs, about an inch in length, which are kept from coming in contact with the guide by means of stout steel springs attached to the axle of the wheels, which extend across the top of the cage, from one side to the other, and also by the strain of the cable. In case the hoisting cable should break, the springs would act at once, causing the axles with the eccentric wheels to revolve just enough to force them to grip the guides, and dig those stout teeth, or pointed cogs, into the wood each side, and instantly arrest the downward progress of the cage; the heavier the load upon it, the stronger being the grip of the safety wheels. In order to exhibit the complete working of this new cage, Robert Ross, foreman of the mine, and Mr. Bray, the maker of the cage, got upon it as it hung suspended in the mouth of the shaft, and another man cut the cable. The effect was instantaneous, the cage only dropping one inch and a quarter, when it hung firm and perfectly secure. Without the safety arrangement it would have fallen, with its human freight, to swift and sure destruction, 850 feet to the bottom of the shaft.

These were invented by Mr. Daniel Grant, the head carpenter of the works, and he has applied for a patent for the same. They are simply a pair of small gates, or iron doors, hung to posts at each side of the shaft entrance, which always remain closed, except when the cage is up, thus preventing the accidental or inadvertent running of a car into the open shaft when the cage is not there to receive it. A stout spring cam at each side of the shaft keep the gates closed; but the cage, in coming up, presses against the cams, and these, by means of connecting rods, push the gates open. A short time ago a carman happened, by mistake, to run a car into the wrong compartment of this shaft, where the cage was not up, and, of course, down it went, occasioning a damage of over $300. He could not do the thing now. Similar gates can be fitted to every station in the mine, which is not the case with other inventions of the sort now in use at some of the shafts along the Comstock. Honor to Daniel Grand and William Bray for their life and property saving handiwork. I like to record all such instances of practical ingenuity. 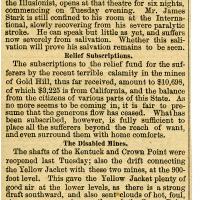