It is Sunday here at Gold Hill, same as in other portions of the Christian world, and we observe the day just as faithfully as any community where love—of God and love of the almighty dollar are ever contending with each other for the supremacy. A great many Gold Hillers go to church Sundays, and a great many more don't. We haven't got civilized up to the point, yet, of "shutting down" all the whiskey mills, any more than we do the quartz mills, but we keep on drinking and pounding away Sundays, same as we do week days. Even the faro banks are kept running, if anything, brisker than ever that day, owing to some men trying to observe the Sabbath by not working. Do you know, now, I just think it is a good thing that the mines and mills are kept running Sundays, for it keeps lots of men out of mischief. Earle, the great revivalist, when he was over here a couple of years ago, made quite a strong move in favor of having all the mills and mines shut down on Sundays, evidently under the delusion that the workmen and miners would all rush to hear him exhort; but, fortunately, that calamitous move was ineffectual.

Why, bless his dear old soul, if they didn't pass the day agreeably in some saloon playing "pitch seven-up" for the drinks, or skirmishing around the faro table, they would hire a horse or a cart, and go out for a day's sport in the country. They would hardly be cooped up in a meeting house after being cooped up in a mine or mill all the week. Of course, there are a few honorable exceptions, as for instance, one friend of mine, who used to work in the Gould and curry. He put in all the working time he could, even working over hours, thus averaging eight days in a week, at four dollars per day; the consequence was that being totally unvitiated by outside demoralizing influences, his mind became of a morally reflective turn and he was easily persuaded to become a convert under Brother Earle, and has remained steadfast and true ever since. He goes to church regularly every Sunday, and never works, swears or behaves any way unchristianlike, only week days. I am fully persuaded that working Sundays was what fetched him, and that otherwise he would have remained a stray scalawag of a sheep, roaming outside the fold of the Lord forevermore. 'Tis well.

While on this little religious dissertation I must tell you what Brother B—, a sort of traveling jour preacher, got off last Monday. A lot of us were rejoicing and congratulating together over the glorious news just telegraphed that the last spike was driven, completing the great Continental railroad connection, when B—chimed in with his sonorous, exhortive voice. Says he: "My friends, do not dwell with such exceeding joy over the driving of that last spike, but oh ! my dear brethren, just think of the great day that is fast drawing near, when the last trumpet shall sound, and Jesus Christ himself, from the summit of Mount Calvary shall telegraph to all the world that he has risen indeed, and come to rule amid all power, peace and glory over the great kingdom, descended to him from his Almighty Father. Then shall all nations bow before him and join in one universal shout of jubilee. Then, and not till then will the last spike be driven; a spike compared with which this little one will be no more than a carpet-tack or a shoe-peg."

Through a really awkward and provoking misunderstanding as to the proper and true time for celebrating that last spike driving, we had no fair show, and did but little in the way of public demonstration on that eventful occasion. A few guns were fired, and steam-whistles blown, and in the evening there was a faint attempt at fireworks and illumination; that's all, in either Gold Hill or Virginia; but just you wait till this fall, when the Virginia and Truckee Railroad is completed, and you will hear of a celebration in this quarter, quite probably. Our Gold Hill and Virginia firemen were so well treated by the Sacramento firemen at the late big celebration, that they propose inviting them, in return, to come up here on that special occasion, and be treated in the very gayest and most luxurious Washoe style. Within the last day or two several wooden buildings, at the upper end of the town, where the railroad will cross Main street, have been removed, and grading will be prosecuted at this point forthwith. A large force of men were put to work yesterday grading a wagon road along the south side of Fort Homestead Hill, in order to haul away the waste from the tunnel to be commenced at that point, there being no good place for a dump at the mouth of it. The other end of the tunnel is already in some distance. The tunnel at American Flat, and the other tunnels between here and Virginia are progressing admirably, and a large portion of the grading between here and Carson is already completed ready for the ties and rails. The first spike will be driven pretty soon.

Wild flowers are beginning to show themselves upon the hillsides, but they are not distinguished for either variety or great beauty. The blossoms of the wild peach are the prettiest, and sheep, goats and cows are very fond of them. The principal floral glory is not in bloom yet, but will be in a few days. It grows on a dwarf mullein stalk, is all yellow, and about the size of a dinner plate. The sage brush looks healthy. It has put forth a fresh coat of green leaves, and looks refreshing.

The White Piners are coming back about as fast as they went. The Inland Empire says as high as sixty-five persons left Hamilton in a single day for Elko and westward. One reason for such an exodus is that Wells, Fargo & Co. have put the fare down to $5, by their stages, between the two points, or $40 50 through to Virginia. Another reason is that several hundreds of anxious dwellers in that famous Silverado have become sufficiently chlorided, and finding the "poor man's paradise" not all it promised, they are anxious to get back to the white settlements, where there is something tangible to tie to. The truth of the matter is that it is a rough country for any one at the present time, and possessed of few attractions in the way of home comforts, yet it most certainly does contain some very rich ore indeed. The extent of it is very limited, not withstanding all interested representations to the contrary; and all that has been discovered thus far would not support one twentieth part that has crowded in there. As it stands now, it is a goo country enough for a few people; what the future may develop remains to be seen.

The Howson Opera Concert and Burlesque Troupe played all last week to large and fashionable audiences, at Piper's Opera House, Virginia. Their engagement closes next Wednesday evening. August Siegrist appears next—the wonderful wire rider, who telegraphs himself through the air on a velocipede. If there were no insulators to bother him, he might, perhaps, make pretty good time between here and the Atlantic States on the Overland telegraph wire. After Siegrist has circulated himself a couple of nights, the Opera House will close for about a week, or until Hartz, the Illusionist, arrives. Hartz will draw good houses.

As I stated in my last letter, all drifts or other passages connecting the Yellow Jacket with Kentuck and Crown Point mines are tightly and effectually closed, in order to shut out all possible fire communicating from the other mines. This, of course has the effect to stop all circulation of air, and no fresh air goes from the surface down into the mine, except what is forced down through the long tube of the patent blowing-machine. This goes down to the lower, or 900 and 800-foot levels, and from there considerable ore of a rich quality is daily yielded. The other parts of the mine, the upper levels especially, are too hot and filled with foul air to allow of men working, therefore only about half the force usually employed in the mine are working. The Crown Point and Kentuck shafts are still tightly closed, and but little is being done about the hoisting works of either mine. Both companies are improving the opportunity to repair machinery, put on new cables, etc., in readiness for active operations as soon as the mines shall be reopened. When that will be, no one seems to know at present; probably some time next week, however, as there is but little if any gaseous smoke issuing from the Crown Point shaft to indicate that fire still exists in the mining depths. These three principal mines being thus disabled has a very apparent and depressing effect upon business of all kinds, but here and at Virginia, as four or five hundred men are thrown out of employment, and many thousands of dollars out of monthly circulation. "Pay-day" does not come now.

During the past week the Imperial and Empire companies have been cleaning out the slum or waste matter settled in the sump or bottom of their deep new shaft, and otherwise preparing to sink deeper. They never made a better move, and the only fault to find with them is that they did not do it sooner. At both the 1,000 and 1,100 foot levels from this shaft they have drifted clear through to the west wall, and by means of side drifts and cross cuts they have prospected the vein pretty thoroughly, but failed altogether in finding anything more encouraging than barren quartz and porphyry. The shaft is cleaned out and they will most probably start sinking to-morrow. It is 1,104 feet deep now, and the bottom of it is just cutting the east clay wall of the Comstock. As the ledge maintains its present established dip or inclination of forty-five degrees to the east it will take about 200 feet deeper of sinking perpendicularly before the west wall is reached. In that distance surely the barren belt should be passed and good deposits of ore developed. There is every reason to believe that the same good body of ore found at the lower levels of the Yellow Jacket will be intersected by this shaft; at any rate, it will prospect the ledge at that point far more thoroughly than by any other possible means, and as the lower levels of the mines generally along the old Comstock are looking exceedingly well, there is certainly hope yet for this. 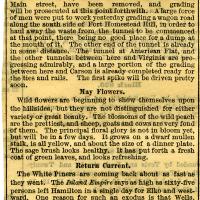