All Gold Hill and Virginia are agog with high-flown patriotic anticipations relative to what the morrow is supposed to bring forth. The great silver spike of Nevada—which, together with the golden spike of California, are supposed to fasten the last two ends of the last two rail to the last tie, and thus complete the great Continental railroad connection—was hammered out and forwarded to the front yesterday, and Liberty Engine Company, No. 1, of Gold Hill, and Washoe Engine Company, No. 4, of Virginia, have both gone down to Sacramento with their machines to-day, in order to join in the grand celebration of to-morrow. The telegraph operators of Gold Hill and Virginia have also made arrangements to have the clicks of the telegraph, which are to correspond with each stroke of the hammer that drives home that "last spoke," transmitted to their offices simultaneously, and when the lightning shall say that the great national work is done, each office will send up a flag as a signal to be responded to by every bell, steam whistle, cannon or other noise-producing arrangement which can be turned loose on that interesting occasion. Old Washoe will be heard some about that time, and I doubt very much whether there is another locality on the face of the globe that will or can make more noise than Storey county when she sets out.

The Yellow Jacket mine is all right now, and yielding at a very satisfactory rate. The drifts and all other points of connection with the Kentuck and Crown Point mines are tightly and effectively closed, therefore all fire, smoke or mineral gas is shut out, and the air is good throughout the mine. Fire being discovered burning and increasing in the Kentuck and Crown Point mines last Monday, driving all the miners out, both shafts were tightly closed and have remained so ever since. Strong gaseous smoke still issues from the covering of the Crown Point shaft, inducing the belief that fire still exists in the mining depths, therefore, both these mines will probably be kept closed some days longer. Meanwhile, opportunity is taken to repair and fix up machinery, etc., ready for active operations when mining work is again resumed. May that be soon, is the prayer of not only all the stockholders, but of the hundreds of miners thrown out of employment.

Last Tuesday I was present at a trial of Paul & Wood's Electric Process for the amalgamation of gold and silver ores. Mr. Almarin B. Paul, one of the inventors and patentees of that new process, and well known throughout this section as an old resident, and the pioneer mill-man of Gold Canyon, himself superintended the trial, which was conducted at the old Ione mill, a short distance above Silver City; and there were also present quite a number of the principal superintendents of mills and mines from Virginia, Gold Hill, and other localities. I will not attempt a minute description of Paul & Wood's process, for that is already familiar enough in your columns; but will treat it incidentally as I come to it. The ore worked was from the Twin mine, Silver City, containing principally fine gold; but it answered very well by way of illustrating the capabilities of the process. It was first put through the five-stamp dry crushing battery of the mill, coming through the screen in rather a coarse state. Each stamp weighs 650 pounds, and the battery is capable of crushing eight tons per day dry, or twelve tons by the usual wet process. The dry pulp, received in a big box, was next shoveled into a large circular grinder, or revolving barrel, five feet in diameter and three feet in length. This barrel, or drum, is of heavy boiler iron, with cast iron heads, and a trap door in the side to shovel the pulp into. Six hundred and fifty pounds of this dry pulp, or ore meal, constitutes a charge; and with it about 2,000 pounds of cast iron buttons, an inch in diameter, and weighing about an ounce each are shut inside the barrel, which is then revolved at the rate of twenty-five revolutions per minute. This creates a very effective grinding action, for in forty minutes the ore is reduced to an impalpable powder, like super-fine flour, and is screened separate from the buttons by a very simple operation. This ore is then shoveled into Paul & Woods' amalgamator, which is simply a barrel of heavy boiler iron, with cast-iron heads, revolving horizontally like the previous one, and surrounded by a sort of furnace casing, wherein, on a grate beneath, a fire was built in order to create the requisite degree of heat. A small aperture at one end allowed of the introduction of the floured ore, and by means of a proper cove the hole was shut up tight. This barrel is 38 inches long, and revolves at the rate of 26 revolutions per minute. 1,000 pounds of the pulverized ore constitutes a charge, to which is added one-third its eight of quicksilver. After revolving four hours with a gentle heat, not enough to vaporize the mercury, the charge is withdrawn, and so very intimately is the quicksilver found to be mixed with the pulp that it is not perceivable with the naked eye, yet by simple agitation in water, it is settled and collected with the greatest imaginary facility, what appeared to be nothing but a dry powder thus yielding an ounce or two of bright, lively quicksilver in a horn spoon, by less than a minute's washing.

Nothing could be more thoroughly subdivided and perfectly disseminated than was this quicksilver throughout the pulp; and, as a natural consequence, it sought out and amalgamated with every particle of the precious metal therein contained, and with which it had all the stronger affinity by reason of the frictional electricity evolved by the revolutions of the barrel and the gentle heat of the fire. The beauty of the system is that no slums are allowed to run to waste, but the whole is more thoroughly searchingly and completely amalgamated than by any other process yet discovered. Neither is there any waste at all of quicksilver—something that can hardly be said of the common wet process. From this excellent revolving amalgamator the merecurialized pulp is taken and put into a large settler, which together with the revolving amalgamator, constitutes the new portion of the process, although that button barrel grinder is quite a novelty of itself, but it has been in use at that mill for some time. The settler is seven feet across by two and a half feet deep, circular, with wooden sides. The bottom is covered by a copper plate, and the pulp being diluted with plenty of water containing chemicals, constantly stirred by the usual slowly revolving arms for four hours—the same time required for the amalgamation. On top of the water floats a cover just filling the surface, on the under side of which is a zinc plate, between which and the copper plate at the bottom a constant current of electricity is induced by the action of the chemicals, gradually and completely attracting and settling all the little particles of the quicksilver, together with the precious metals on the copper bottom. The slum is then run off totally worthless.

So much for Paul & Wood's Electric Process. Mr. Paul claims for it that by it he can work all kinds of ore with the greatest facility, even the most intractable, and however rebelliously charged they may be with base metals; and Comstock ores, he says, he will work up to 92 per cent. of the fire assay of the same. With that little barrel at the Ione mill he can work three tons a day; but the capacity of work, of course, could be much increased by larger barrels or more of them. Taking the dry-crushed pulverized ore, just as it is before it goes into Paul's barrel, and amalgamating and settling it instead, by the usual wet process, it can be made to yield nearly as high a percentage as by Paul's process; therefore, it is merely a matter of figuring as to machinery and men required, capital involve, amount of ore worked, and cost of increased yield, in determining the true merits of Paul & Wood's Electric Process. We, in common with all who witnessed its operation, were much pleased with it, and shall contemplate its future history and developed successes with the liveliest interest. 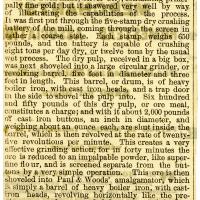