The Yellow Jacket, Kentuck and Crown Point shafts remained closed, in order to smother out the fire if possible, from last Monday night until yesterday forenoon, when the Yellow Jacket shaft was reopened and preparations made for going down into the mine once more. The Kentuck shaft was kept closed until 3 P. M. to-day, when it also was reopened. The Crown Point shaft is still tightly closed, although full preparations are made for reopening it, and steam is up in the hoisting works ready for commencing operations as soon as it shall be deemed expedient. There is no surface sign of fire at present existing in either the Crown Point or the Kentuck mines, except that a small quantity of gaseous smoke comes from the mouth of the latter shaft. I understand that it is the intention to explore the interior of both those mines if possible to-morrow.

For reasons best known to themselves, the controlling powers of Yellow Jacket mine yesterday took a notion to have a private examination of the same, carefully allowing outsiders to understand that the shaft would not be reopened before Monday (to-morrow). They accordingly barricaded all the doors and windows of the building, and just before noon they started the works. The blower was put into operation, sending fresh air from the surface down into the mine, and the shaft being uncovered, attempts were made to descent on the cage. The timbering in the shaft was, however, found to be so much swollen and sprung out of place by the long-continued action of the hot steaming process adopted to extinguish the fire, that the cage would not pass without considerable hewing and trimming out. This proved a very difficult job, by reason of the hot poisonous gas and smoke coming up, which made several of the workmen sick, especially during last night. One of them was brought out of the shaft perfectly crazy, and so convulsively violent, that it took half a dozen men to hold him. Dr. Hall was sent for, and he is to-day pretty much recovered from that terrible asphyxiative sickness, which had nearly proven fatal. It was not until about noon to-day that the 900-foot level was reached. The air below the 900-foot level, where the fire was, is pretty good. Whether there is any fire still existing in the mine, or what may be the actual extent of the great damage supposed to be done in those important subterranean regions, is most probably better known at the present time to the officers and controllers of the mine than to your correspondent, the public or the majority of hopeful stockholders. This secret session is still progressing, and consequently many are the wild rumors afloat of continued fire, immense damage, and extensive caves. The Crown Point shaft was sounded yesterday, and less than 200 feet of water found at the bottom.

Not the small stockholders, but the families and dependent relatives of the victims by the great mining calamity, are all being well provided for, thanks to a truly and munificently generous public. California has most kindly and bountifully contributed, and the whole-souled people of this section have responded abundantly to the call for immediate assistance—pecuniary and otherwise. I received a letter from White Pine a day or two since, which states that they will contribute $5,000 to the relief fund from that famous locality.

Speaking of White Pine, there is a wonderful abatement of the rush towards that rich land of the cap-rock and the chloride perceivable lately. You San Franciscans can keep on rushing if you choose, but as far as this section is concerned, fully as many are coming back here from White Pine as there are going, especially within the last week or ten days. Many are pronouncing it a bilk of the very first water, while others say that what little chloride and horn silver there is in Treasure Hill will all be dug up and backed out of the district inside of six months, and that even now it is the tightest kind of scratching to make grub there. The fact of it is, that everything is totally overdone at White Pine. The mineral resources of the district thus far developed are very rich, but not extensive, or bidding fair for permanency. They are not sufficient for one-tenth part of the population which will overrun that section this summer. The true reason why so many Gold Hillers and Virginians are coming back is, that they find nothing out there which, for true remunerative permanency or the substantial support of a large community, can anywhere near equal the old Comstock. That's what's the matter. 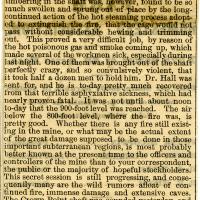