I have just returned from a short round of inspection at the scene of the disaster. The boilers of the hoisting works are still sending heavy volumes of steam down the shafts of the Yellow jacket, Kentuck and Crown Point, each one of which is as tightly closed as possible, yet considerable of the hot vapors from below escape through the surface timbering and chinks not easily got at or stopped. That from the Yellow Jacket is strongly impregnated with gas and light smoke, but partakes more of steam that it did yesterday, showing that although the fire may not be extinguished, yet the mine must be pretty well filled and saturated with the steam. From the Kentuck shaft, nothing but steam issues and from the Crown Point comes steam, smoke and gas mixed, with the steam predominating more than it did yesterday. It is not of course known at present whether the fire is really quenched or not but I do not believe it is, quite. It was proposed to open the shafts to-morrow (Monday) morning, but I believe that idea is abandoned, and they will remain closed under the steaming process for the next two or three days.

Extent of the Damage.

How much each mine is injured by this disaster will only be known after the shafts are re-opened; at present it is merely a matter of speculative conjecture. I can merely reiterate what I stated in my last letter, supported by the general impression of those who should know best, that the fire has not been at all extensive and has not destroyed any great amount of timbering even in the Yellow Jacket mine; at the cost of a few days' work and a few hundred dollars, the whole will probably be repaired again as good as ever. Owing to the nature of the workings, and the situation of the timbering at that point, it is difficult to conceive how it could readily pass through into the Kentuck mine, and no one believes that it got into the Crown Point at all. Such a body of steam constantly driven down into these mines and permeating every tunnel, drift, winze, stope, breast and chamber for such a length of time is extremely liable to saturate the timbering, earth, ore and everything else, and perhaps may do some damage in that way. It will take some time for the mines to dry out, the unwholesome gases generated to pass off, and the air to become as comparatively good as it was before. The loss of time and heavy expenses entailed in the extinguishing of the fires, recovering the bodies, funeral charges, donations to the sufferers, may all be legitimately counted among the losses by stockholders, but permanent injure to either mine I consider out of the question. No ore will probably be produced from either mine under a week at least, even though the fire is already extinguished.

Horrors yet to Come.

When I was at the Crown Point Works this evening I saw the carpenters busily at work making some long, narrow boxes, in which to put the bodies of the eight men still remaining in the mines. These, are we have before stated, George Edwards, Daniel O'Neil, Thomas Laity, and A. Reinay, all at the 600-foot level of the Crown Point Mine. In the Kentuck, Joseph Gassen is at the 700-foot level, and Martin Clowney at the 800-foot level. When found, they will have been nearly or quite a week in that poisonous, hot, reeking, confined atmosphere, and their decomposed condition may be imagined. They will be at once sewed into blankets or canvas, put into the boxes and thus brought out.

Coroner Symons has been busy during the last two days, and has held inquests upon the bodies of 21 of the victims; he will continue. In these inquests the question of who was to blame at all, or accountable in any way for this terrible disaster, has been freely brought up and considered, yet nothing has been elicited attaching blame or culpability upon any one. There was a rumor quite prevalent yesterday that Mr. Kellogg, the foreman of the Yellow Jacket mine, had been arrested on a charge of being somehow guilty in that respect, but this was totally false and unjust.

Cause of the Fire.

The origin of the fire still remains unaccounted for, except from a lighted candle having been carelessly left where it could catch to the wood work, and it had evidently been burning for some time when discovered. An explosion of powder or gas is said to have occurred shortly afterward; but we are informed on the best of authority that no powder was where it could then explode. Two or three of the men who came out of the Yellow Jacket mine at that time, however, declare than they heard a noise which sounded something like a deadened report of a gas explosion.

Flags at Half Mast.

The flags on all the mining works, engine houses and other prominent places throughout Gold Hill and Virginia have been flying at half mast ever since last Wednesday, when the great calamity occurred.

Relief for the Distressed.

The Relief Committee appointed at Gold Hill to receive donations and contributions for the widows, orphans and other family sufferers, and attend to the proper disbursement and application of the same, have already received liberal sums of money from prompt and generous California, amounting to over two thousand dollars, with good promise of plenty more, and tomorrow evening, the greatest benefit ever known takes place at Piper's Opera House, Virginia, the entire gross receipts of which will be applied to this most worthy object. The entire dramatic company have freely volunteered, and Piper gives the use of his popular theater, also, free. There will not be even any gas or printing bills to pay, and Hampton's omnibus line will have on extra teams and busses, running between here and Virginia from six o'clock P. M. until midnight, fare 50 cents each way, to and from the theater, and the entire receipts are also to be donated by him to the relief fund. The price of tickets is placed at $2, and several hundreds are already sold. Everybody buys a ticket most willingly, and some have bought them by the dozen, tearing them up and throwing them away afterwards, so that they could not be used. The proceeds of that benefit will probably sum up to $5,000 or $6,000; many even estimate it at $10,000; at any rate, Piper will see a crowded house that night, if he never does again. 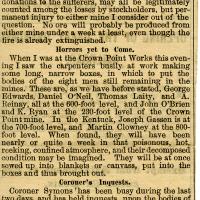