The fire which was discovered in the Yellow Jacket mine at 7 o'clock this morning, and of which you have received a full telegraphic account, is not by any means quenched. It is still burning, and will most probably continue to do so to-night at least. The extent of it, however, is not great as yet. Firemen just out of the mine, and who have stopped down there during the past hour in the 800-foot level, where the fire is, say that it is about 250 feet south of the shaft, and does not extend more than a dozen sets of timbers in length toward the Kentuck, as far as they have been able to ascertain; but it seems to be working upward, and they find great difficulty in getting a stream directly at it. It seemed to be burning up into the timbering above, where it had been worked out and filled in with waste, thus letting down large quantities of loose earth and rock, which had the effect to fill up the drift and stopping the draft of air which had been so strongly circulating through into the Kentuck and Crown Point.

The present prospects are that the fire will be smothered out or extinguished before morning, yet it may not be, for it is the hardest thing in the world to judge of a fire like this, cooped up in the bowels of the earth, where it cannot be got at or respectably managed. Between where this fire is and the Kentuck mine, there is about 50 feet of the drift untimbered; therefore the fire cannot pass there, and has to work above, in the timbers of the worked out ground. I think no great or permanent injury has or will accrue to either this or the other mines. The loss of life is the greatest and most terrible calamity. There is a bare possibility that the men at the lower level of the Crown Point mine, below where the smoke and fatal gas generated is supposed to extend, may be still alive, but the hopes in that direction are indeed small, although the Roots patent blower has been forcing fresh air down to that level continually, for they have made no signal, and when the cage was let down to that level with a lighted lantern and a message, no reply was sent up.

The names of the dead thus far brought out of the fatal depths are: From the Yellow Jacket mine, John Ring, Joseph McClellan and John Hogan; from the Kentuck, Anthony Toy and Patrick E. Quinn; from the Crown Point, Richard Bickell. The last named was killed in coming up out of the mine on the cage with his brother George. Overpowered by the smoke and foul gas, he probably fainted, and was dragged against the side timbering of the shaft, as his head was torn almost completely off and his left arm hung by a small strip of skin to the shoulder. George also came to the surface insensible, but reclining over him with a death-like grip that it was difficult to disengage, his last instinctive idea seeming to be to hold his brother safe in his arms. He has remained insensible ever since, and gasping with asphyxia produced from inhaling the deadly smoke and gas. He has four or five of our best physicians to attend him, but his chances for recovery are exceedingly small, and he bids fair to die before morning.

This is the most terrible calamity of the kind which has ever happened in this State, and a cloud of sorrow hangs not only over this community, but grief and dire distress is carried into the bosom of many a family, for many of these victims were married men. The origin of the fire is supposed to be from some miner's candle stuck against the timbering, after the too novel style. 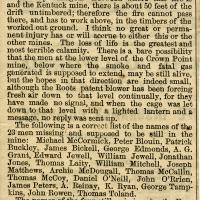