The big blast at the Sierra Nevada mine was let off at 10 A. M. to-day and did splendid execution, throwing down and loosening hundreds of tons of rich ore in which free gold is seen quite plentifully besprinkled. The bullion from the last clean-up is retorted and at Wells, Fargo & Co.'s for shipment to San Francisco to-night. There are two sacks of it, and it sums up to $15,000, rather more than was expected. The bullion returns of next month will be even better still. You may think this is rather a big blast on my part for the Sierra Nevada mine, but it is simply the truth, as verified by the bullion returns.

The prospects of the Sierra Nevada mine are better to-day than I have yet seen them. Nothing has ever been developed at the lower depths of that mine worth mentioning, but at the surface there are thousands upon thousands of tons of ore, rich in free gold, which, under the present active and energetic management, is being brought to light, and made to yield up its closely hidden treasures. Under the Bob Apple administration, this was allowed to lie idle, while the money so abundantly assessed and collected from bleeding stockholders was expended in sinking away down in the bowels of the earth after imaginary deposits, building new hoisting works, and getting ready to do something. Bob did begin to go after the surface ore a little towards the last, but he did not find the best of it. A new board of trustees was elected by the stockholders, and a little man named T. F. Smith is now Superintendent of the Sierra Nevada. Smith nosed out the lead, and has opened out and developed ore enough to last for the next five or six years, and some of it, especially that which has been run through during the last fifteen days, paying very richly. The mill is very convenient to the mine, so much so that the ore is dumped directly into it, the whole cost of extraction and milling only amounting to about five dollars per ton, so that all over that amount counts among the profits. The run for the last month will yield far better than anticipated, especially these last fifteen days. There are nearly forty men employed in and about the mine, and the bullion-producing operations are confined to the surface workings. It is proposed, however, in the course of a few weeks to pump out the main shaft, and prospect the ledge at that point to a great depth, especially to the eastward from the lowest level of the shaft. Whether anything is developed or not at the greatest depths, the Sierra Nevada certainly has the best thing on surface ore of any claim on the Comstock ledge.

The Ophir Company are still busily and energetically drifting west from their new shaft, at the 700 foot level. They are in now about 180 feet from the shaft, and the face of the drift is in pretty hard rock, of a favorable character, however, so that it blasts and works well. The great Comstock at this point is apparently divided in two seemingly distinct ledges or sections of the same ledge, known as the "front" or "east" ledge, and the "back" or "west" ledge. By means of this drift it is expected that the front ledge will be cut in about 250 or 300 feet from the shaft, and the back ledge in about 100 feet further. This 700 foot level is 400 feet deeper than the old Latrobe tunnel, which passed through the front ledge, developing a very promising quality and quantity of low grade ore. What will be developed by this new drift is of course merely a matter for hopeful anticipation and speculation; but there are excellent reasons to believe that good ore will surely be found.

The Gould & Curry shaft is to-day once more pumped out, and this evening or some time to-night sinking at the bottom will be resumed. You will recollect that it is just penetrating the east wall of the Comstock, over 1200 feet below the top of the shaft, or 1500 feet below the level of the croppings. What it will develop, of course, no man knoweth but stockholders and their friends, and everybody else are all hopeful, for the quartz at the bottom of the shaft is of a very promising quality and some few little streaks of ore are said to have been seen in it. The story, however, will soon be told, now, without further anticipation on my part, for the shaft is to be sunk down through until the west wall of the ledge is found, which will be in two or three hundred feet farther, allowing the ledge to maintain its present known and established dip or inclination to the east of forty-five degrees. Who knows but that the Ophir and the Gould & Curry may yet resume their old position among the leading mines of the Comstock? These three mines, of which I have written, are the only ones on the north section of the ledge—from the Savage northward—which are doing anything worth mentioning in the way of development, but just in proportion to their success will be the disposition of other mining companies in that section to follow suit.

Miss Annette Ince and Harry Edwards, supported by a very excellent dramatic company, are drawing very fair audiences at Piper's Opera House. Miss Ince takes a benefit to-night, and will have a crowded house. The classic play of Ion will be given. Edwards will also be given a good benefit next Monday night. This week concludes their engagement. Next Tuesday evening Amy Stone commences an engagement, opening with Fanchon. Her husband also appears, of course, in connection with the balance of the company now performing at the Opera House.

I don't believe the excitement and tendency White Pinewards is quite so strong here as it is in San Francisco—at least I hope not. It is bad enough anyhow, but it was much worse awhile ago. It "went through" our floating population at a pretty lively rate, so that check-guerrillas, vagrants, garroters, bummers and similar nuisances are comparative scarce here, although the disease also walked off with many good church members. The accounts now coming from the famous new Silverado are not very favorable, and this has caused quite an abatement of the fever. It is a quarrelsome country out there at White Pine, I should judge from the thousand and one disputes reported about town lots, mining claims, and all that sort of thing. Even in the Eberhardt they commenced by chiseling each other, and the man who located the claim is not allowed a taste of its riches at the hands of the very men he located. I kind of like the way my old friend Bluxton has subsided down into. He located several claims on Treasure Hill, and got into some sort of a difficulty with his partners in every claim he located. At last he writes me as follows: "I've got a claim now that nobody can't devil me about. It's only 400 feet—200 feet for location and 200 for discovery, and I'm the only so of a gun in it." 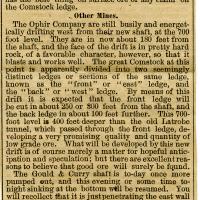